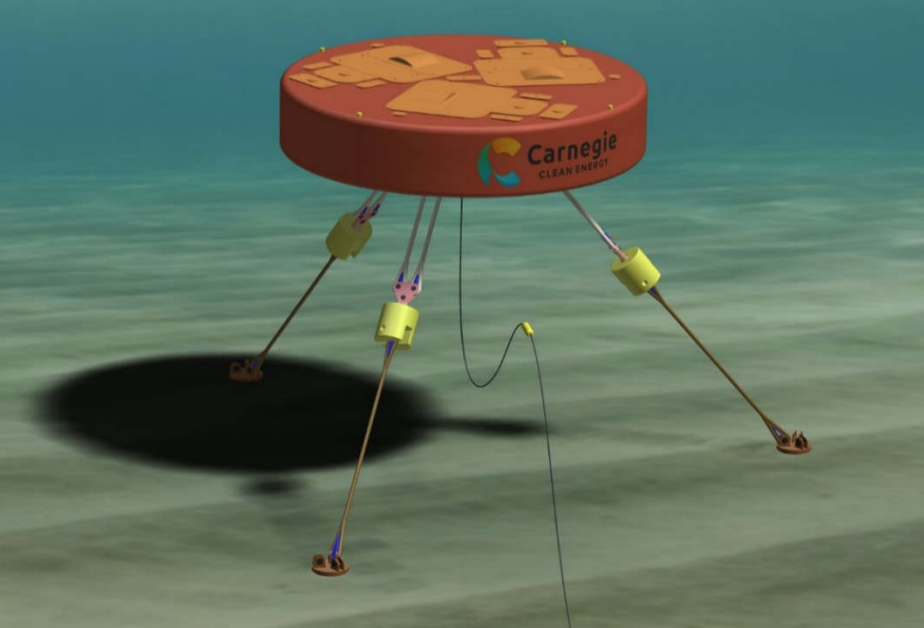 And for an island nation, surrounded by oceans, it’s an idea that holds hugely-exciting potential.

Perth-based Carnegie Clean Energy has long been at the forefront of wave energy worldwide. Last month, the company announced plans for a new wave energy project as well as a National Wave Energy Research Centre at Albany, on the Western Australian coast.

That project, more than five years in the planning, relies on $15.75 million of recently-announced funding from the Western Australian Government and also involves reallocating ARENA funding of $11.6 million, which is committed to foster design and testing of a new, innovative piece of technology that has been kept under wraps until now.

The company has now proudly unveiled that latest advance in the attempt to make clean, renewable energy from the regular and unrelenting force of Australia’s waves.

It is, Carnegie says, the most advanced wave energy device anywhere in the world. And it will generate far more electricity than its predecessor.

“As other renewable technologies become more cost competitive, we need to continue to drive innovation into CETO and be prepared to disrupt our own thinking,” Carnegie Chief Executive Dr Michael Ottaviano said.

“Wave energy is the last globally untapped renewable resource and in the best locations it delivers energy 24/7.

“By effectively harnessing the massive untapped resource in waves and converting it to energy, this technology will be game changing.”

Carnegie will design, manufacture and install an updated CETO 6 unit offshore from Albany during the 2019/2020 summer.

A new US patent was issued for the CETO 6 in early November.

From a distance, as it bobs up and down and pitches sideways with the tide, the new CETO 6 unit looks like giant robotic jellyfish. In reality, it is a fully submerged buoy (known as a Buoyant Actuator). While previous versions have been tethered to a pump on the seabed, the updated CETO 6 will have its pump inbuilt, resulting in a much larger unit with a diameter of 20 metres.

Carnegie’s CETO 5 device, which was installed and commissioned in late 2014 was also supported by ARENA under the Perth Wave Energy Project (PWEP).

That project was the first array of offshore wave power generators to be connected to an electricity grid anywhere in the world and completed 14,000 cumulative operating hours, the highest ever recorded in the global wave energy industry.

The combination of improvements, including the inbuilt pump and a change in the way the unit is anchored to the sea bed means that power production will be greatly enhanced. The new CETO 6 will have a nominal capacity of 1.5MW, as opposed to the 1MW capacity of its predecessor.

Moor for your money

Previous incarnations of Carnegie’s technology featured a single tether line that is fixed to a single mooring on the sea floor.

The updated CETO 6 features a revamped design with multiple moorings. It has long been understood that wave energy convertors with multiple moorings would be more efficient energy producers because they can capture energy in heave (vertical), surge (horizontal) and pitch (rotational) motions rather than simply by moving up and down.

But creating a device with multiple moorings has proved challenging due to the additional costs associated with each foundation. Carnegie has created an innovative solution featuring ‘networked’ moorings that can have multiple devices to be tethered to them.

The other great breakthrough in the new design comes from a greater understanding of how the units move in the water so as to maximinse their efficiency. Carnegie has devoted significant resources to becoming a world leader in this area, developing state-of-the-art hydrodynamic modelling capabilities.

The company has used Perth’s Pawsey Supercomputer to run more than 20 billion simulations during the past year, an unprecedented amount of analysis that has given birth to a new device with world-leading hydrodynamic design.

Carnegie has big plans for wave energy, saying it ultimately hopes to locate a 100MW wave farm on the site. To begin with, production will be more modest, with a 1.5MW updated CETO 6 installed initially and plans to scale up to a 20 MW array as a next step.

OUR NEW PODCAST, THE INNOVATORS, IS OUT NOW. HERE’S A SNEAK PEEK

ARENA is working hard to accelerate t... Read more
Ocean energy
What is tidal energy and how does it work? image

The tide is renewable and relentless.... Read more
Ocean energy
How does wave energy work? image

King Island’s reputation as a renew... Read more
Ocean energy
View all related stories
Follow Us
Back to top