Installations of electric vehicle charging stations are climbing, literally, with a new project aiming physically to lift up street-side charging. 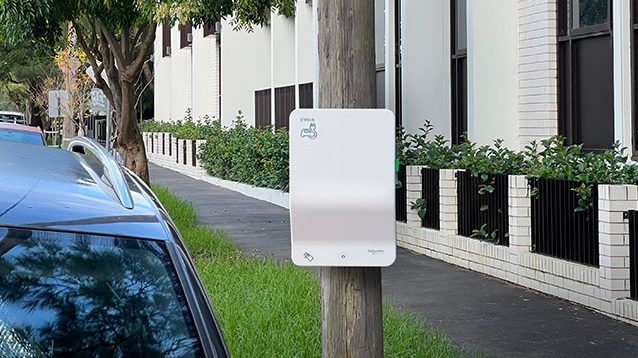 About 1.9 million Australian households do not have access to off-street parking. (Image courtesy of Intellihub)

Imagine being able to park your electric vehicle (EV) in a street and hook straight up to a charging station.

A charger that takes up no space at street level, that requires no off-street parking and can service up to 10 households.

The Australian Renewable Energy Agency (ARENA) is providing funding of $871,000 to support a pilot project, run by Australian and New Zealand smart metering and data intelligence provider Intellihub, to investigate just this scenario.

It could be the difference between going electric or remaining fossil for the approximately one-in-four Australian drivers who do not have off-street parking.

And the key to the project is .. all around. Street power poles.

About 1.9 million Australian households do not have access to off-street parking, making it difficult to charge an EV from home.

Meanwhile, overhead, in almost every street there are network power lines, supported on poles.

It’s a concept already being rolled out across the world. Major global cities, including London, Los Angeles, New York, Hamburg; and Toronto are installing tens of thousands of power pole or streetlight EV chargers.

Intellihub CEO Wes Ballantine explained: “It’s expected that as many as 10 per cent of new car sales in Australia will be electric vehicles by 2025. That equates to an extra 120,000 new EVs on our local streets each year.”

“It’s likely that many of these car owners may be unable to charge their EVs from home,” Mr Ballantine said.

“Power poles line most of our public streets and that presents an opportunity for the EV charging market. They’re an accessible, safe, and practical option for EV charging,” he said.

How will the EV charging system work?

Drivers will use a third-party app to manage their service. They’ll get information about charging costs, time limits, billing and other tools for interfacing with the electricity grid.

Researchers will monitor how many people use the chargers, and their impact on the electricity network.

For instance, the information could help investigate a current hot topic: demand flexibility.  Could lowering EV charging costs during the day help soak up excess rooftop solar during low-demand or peak-production periods?

Origin Energy will supply the project, with 100 per cent of the energy required to charge the vehicles, matched by the equivalent amount of certified renewable energy added to the grid.

The project could clear the way to a wider rollout of commercial charging stations. That will depend on whether it is both judged a commercial success, and demonstrates there are no regulatory barriers to using existing, powered street infrastructure.

With 1.9 million homes as potential customers, that could create demand for around 190,000 batteries. Those batteries represent about 1,400 megawatts (MW) of potentially controllable load for retailers and electricity networks to support the sustainability of the grid.

“Not everyone who wants or currently owns an electric vehicle has the ability to charge their vehicle at home, which is why we’re excited to partner with Intellihub on this trial to essentially remove some of the last barriers stopping people from entering the EV market.

“Power poles are everywhere and provide the perfect opportunity to pair with EV charging, removing the requirement for costly installations of charging stations,” he said.

Fifty sites have been chosen for the trial project across nine NSW local government areas:

Why did the South Australian blackout... Read more
Renewables for industry
Alice Springs – a testbed for the future energy market? image

The central Australian town of Alice ... Read more
Renewables for industry
View all related stories
Follow Us
Back to top