With potential to power everything from cars to cooktops, houses and rockets, renewable hydrogen could be on the verge of changing the way we consume energy. 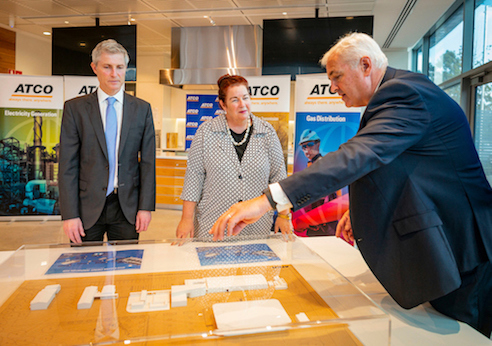 ARENA has announced $1.5 million in funding for Australia’s first green hydrogen innovation hub at ATCO’s operations facility in the Perth suburb of Jandakot.

The project’s centrepiece is a display home where hydrogen will be tested in household appliances designed for natural gas.

An array of 1100 solar panels paired with battery storage will power the site, diverting excess energy that would otherwise be wasted to produce green hydrogen.

Renewable green hydrogen is made using electricity generated by renewable sources such as solar and wind, ensuring the process is carbon free.

ATCO is building the Clean Energy Innovation Hub to explore opportunities for surplus renewable energy to be stored as hydrogen.

Head of innovation Samuel Lee Mohan says this journey started more than two years ago when they embarked on a project to understand the role natural gas can play in a residential hybrid energy system.

“We designed a hybrid energy system which uses natural gas as a backup to renewable solar and battery technology. That trial was very successful,” Samuel Lee Mohan said.

With the gas industry releasing a vision to be a low carbon energy provider by 2050 and global trends towards decentralisation and decarbonisation, ATCO set out to take their hybrid concept to a commercial scale.

“Hydrogen is a clean energy that can provide storage of intermittent renewable technology. It achieves two things – decentralisation in the short term with hydrogen as a backup,” Mohan said.

Looking to the 2050 low carbon vision, Mohan said, “Biogas and hydrogen have a role to play, and that requires us to innovate today”.

ATCO is on track to have the solar panels installed by August and be producing renewable hydrogen by March 2019.

Hydrogen will be piped in two lines – one blended in low concentrations with natural gas to test how a cooktop, hot water boiler and space heater respond to different proportions of the renewable gas, and a second delivering 100 per cent hydrogen for dedicated hydrogen appliances that will be installed in the future.

The technical challenges aren’t the only barriers to overcome before renewable hydrogen can start replacing natural gas in our homes.

Mohan explained, “One is understanding the engineering and technical challenges of producing and injecting hydrogen into the gas network. The second is economics. Understanding the cost and time of changing appliances and some network upgrades”.

He believes the technical barriers could be overcome within five to eight years.

Storage vital as renewables take over

As renewables take off, attention is shifting to how surplus electricity generated by solar and wind can be stored for later use to provide dispatchable power.

Hydrogen is one option, using excess renewable energy to power an electrolyser that separates water molecules into hydrogen and oxygen.

ATCO’s electrolyser will be powered entirely by onsite solar, creating renewable hydrogen that is completely free of emissions.

The system is expected to deliver enough electricity to produce about four tonnes of renewable hydrogen per year.

Hydrogen has upsides over other storage technologies, being easily stored and transported, able to quickly fill fuel tanks and only emitting water vapor when used to power a fuel cell.

The Clean Energy Innovation Hub will also use hydrogen to power a fuel cell to stabilise the electricity supply, in addition to combusting it in the place of natural gas in domestic appliances.

Australia’s vast reserves of natural gas have delivered affordable energy since the 1960s, but rising costs and demand for renewable alternatives are driving investment in hydrogen technology.

“With more wind and solar coming online, there are times when we have excess capacity. Rather than spill this energy, we can store it. Hydrogen is a prospective form of storage,” he said.

“We have a ready-made gas network for storing and transporting hydrogen – whether across the city or to a port for export.

“Hydrogen will feel familiar to most people as it’s very similar in usage to natural gas. However, there are challenges to overcome. We’re excited about this facility because it will help us figure out how to implement hydrogen in a very practical way,” he said.

With 750,000 connections and 14,000kms of pipelines in Western Australia alone, ATCO owns and runs the state’s largest reticulated gas network.

“We intend to play a leading role in the development of forward-thinking, clean energy solutions, and our Clean Energy Innovation Hub is at the very heart of those plans,” Pat Creaghan said.

“The project has many exciting elements, but what truly sets it apart is the use of excess renewable energy, which would typically be lost to the system, to produce hydrogen,” he said.

How does a green hydrogen aircraft operate? image

As we look back at 10 years since ARE... Read more
Hydrogen energy
How to convert electricity to hydrogen image

It’s an innovative device that ... Read more
Hydrogen energy
View all related stories
Follow Us
Back to top