In a sign of the times, oil and gas giant Santos has begun the process of transitioning its fleet of beam pumps to run on renewable energy. 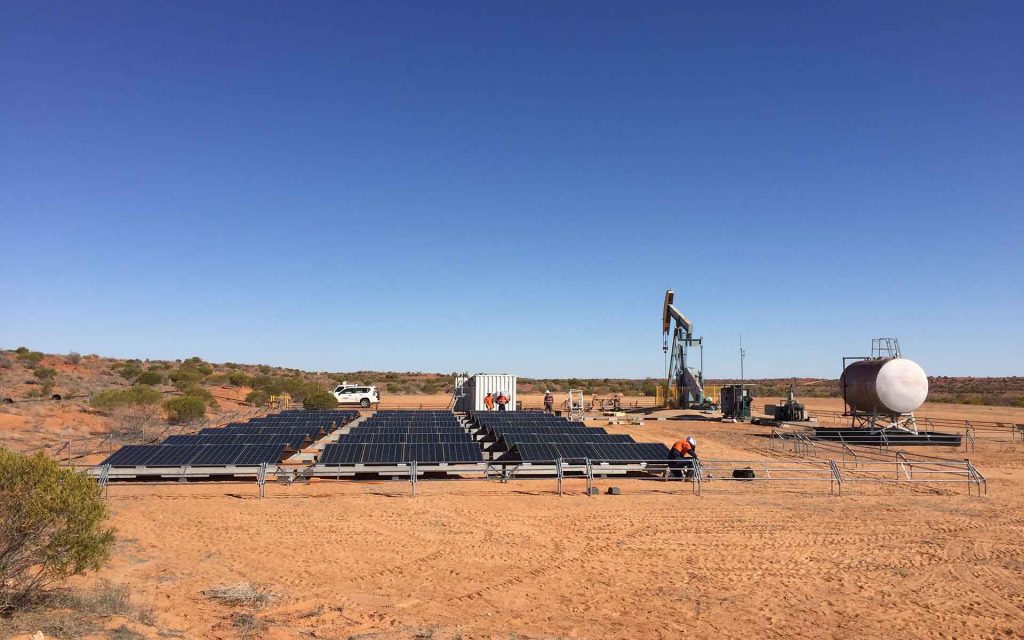 The unlikely alliance will see Santos convert 56 of its crude oil pumps to run on solar PV and battery storage systems in the Cooper Basin – a remote resources vein running from north-east South Australia across the border into Queensland.

The sun drenched, off-grid location is a perfect match for solar, proven by a pilot solar beam pump that has operated continually since August. The success of the trial has shown that the renewable energy can withstand the harsh desert environment and paved the way for the rollout of new solar pumps.

Santos say the project will reduce emissions and waste from the oil production process. Converting the pumps to solar is predicted to save 140 barrels of oil every day and lay the foundations for Australia’s second-largest oil and gas producer to swap a further 151 Cooper Basin pumps to run on renewables.

With a total of 3.2 MW of solar PV to be installed across the remote pump sites, the $16 million project will deploy battery storage at each location to supply the oil pumps with 100 per cent renewable energy.

“Our own consumption of fuel in the Cooper Basin is equivalent to about five per cent of east coast domestic gas demand, so if we can extend our use of renewables across our operations, we can also free up more natural gas for sale, which is a good way to put downward pressure on gas prices,” Kevin Gallagher said.

The rollout of solar pumps is ARENA’s first off-grid application of renewables in the oil and gas industry. Aiming to prove the reliability of renewables for this type of operation, the project could provide a blueprint for other resources companies to follow.

ARENA is providing $4.3 million towards the project, which ARENA CEO Darren Miller says will complement ARENA’s previous work with the resource sector.

“Assisting the resources sector in turning to renewable alternatives is something we’re extremely proud of,” Darren Miller said.

“Santos will be ARENA’s first off-grid project with the oil and gas industry, building upon our previous support for implementing renewable energy at mining operations around Australia, reducing reliance on diesel and oil,” he said.

Delivering renewable energy to remote communities and mines to replace diesel was one of the first ARENA initiatives, launched soon after the agency’s inception in 2012.

In 2014, ARENA supported Rio Tinto to build a 6.7MW solar farm at remote bauxite operation in Weipa, Queensland. The first example of renewables powering an off-grid mining operation, the project has helped to insulate the mining giant from fluctuations in diesel prices.

In 2016, a solar-diesel hybrid system was commissioned at Sandfire’s Degrussa Copper Mine, utilising a solar-hybrid system backed up by battery storage. Saving about five million litres of diesel every year, the world-leading project has led the way for other mining companies to embrace renewables.

Creating a secure supply of energy is emerging as a key motivator for resources companies like Sandfire and Rio Tinto to embrace renewables. Providing a buffer from the fluctuating cost of grid power or diesel, without the risks of network outages or practical realities like flooded roads in the wet season, renewables are taking off in a sector where cost is king.

Many of Australia’s biggest export ... Read more
Solar energy
Why sheep could be good for your solar farm image