The electricity network that serves Alice Springs and its surrounds will be transformed to accommodate more renewable energy. 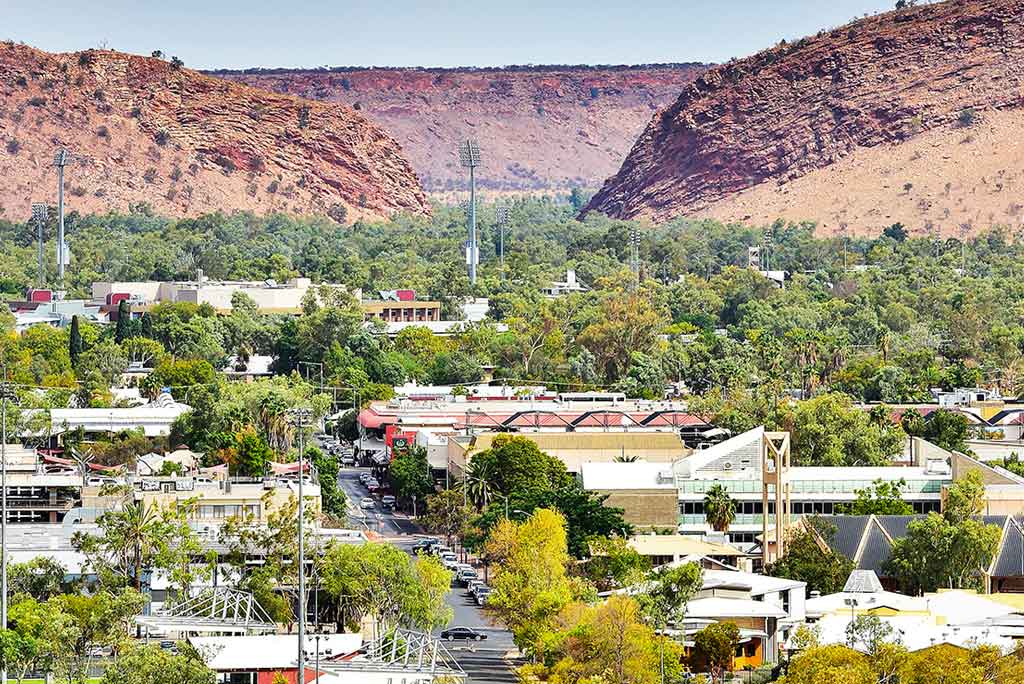 Heavitree Gap is the physical and symbolic entrance to Alice Springs; its shape is reflected in the Alice Springs Future Grid logo.

ARENA has announced funding for a new project that will help to unlock capacity for more renewable energy in the Alice Springs electricity grid.

Currently just ten per cent of the Alice Springs electricity grid comes from renewables, with a lack of system strength holding back the development of new renewable energy generation.

Work on the Alice Springs Future Grid will be coordinated by the Intyalheme Centre for Future Energy, a flagship project of Desert Knowledge Australia – a statutory corporation established by the Northern Territory Government to tackle challenges and promote investment in remote areas.

From the outset of the project, Intyalheme says they have been mindful that achieving rapid growth in renewable energy demands buy-in from across the community, and has set out to demonstrate a collaborative model that can be applied to other regions and jurisdictions.

ARENA is providing $2.17 million towards the $9.3 million project, which will be complemented by $3.19 million from the Australian Government’s Regional and Remote Communities MicroGrid Fund.

ARENA CEO Darren Miller said the project will provide vital support to help the town to transition towards renewable energy.

“This project will lead to the development of a tangible roadmap for increased renewable energy adoption in Alice Springs. The lessons learned will also contribute to the broader Northern Territory and other remote Australian microgrid communities,” Darren Miller said.

Work to deliver the Alice Springs Future Grid is being governed by a steering committee that includes Desert Knowledge Australia, CSIRO, Ekistica, Power and Water Corporation and Territory Generation, along with representatives from ARENA and the Northern Territory Government.

Nearly two years on, Intyalheme General Manager Tristan Simons says the event was the catalyst to developing the concept of the future grid.

“Intyalheme was proud to host the first ARENA A-Lab to be held in regional Australia… obviously there was a large amount of refinement to do, to build on those initial ideas, and the people and organisations who attended that event have remained in the project,” Simons told ARENA ahead of the funding announcement.

The scale of the work ahead is highlighted in the recently released Northern Territory Electricity Outlook Report, which states:

“…it was extremely challenging (if not unrealistic) for the Territory to source 50 per cent of its electricity consumption in the three regulated systems from renewable energy sources relying on solar PV and battery storage alone.”

The report stresses that the target is achievable, but potentially more complex and expensive than in jurisdictions that benefit from interconnection with other states and access to wind or hydro power.

Together with AEMO, the Northern Territory Utilities Commission found that maintaining reliability and system strength as more renewables are connected will need a mix of new technologies, including synchronous condensers, solar forecasting, demand side management or even new thermal peaking plants.

Simons says the technical barriers are well understood and the Alice Springs Future Grid project is working hard to empower the community to drive the energy transition.

“In setting up the Intyalheme Centre for Future Energy it was recognised by the Northern Territory Government that no single entity could get the NT to its 50% by 2030 renewable energy target,” he said.

“Future Grid will also serve to educate, inspire and empower the community to continue driving the energy transition, just as the public already has been doing by taking up rooftop PV with such unstoppable enthusiasm.”

Options on the table for the Alice Springs electricity grid

The challenges and possible solutions were explored in depth at the 2018 A-Lab. At the time, Territory Generation said their modelling showed the first 30 per cent of the state’s 50 per cent target will be challenging but achievable, provided actions are taken to deal with some of the network constraints in the region.

The A-Lab attendees developed a range of ideas to grow the uptake of renewables in the region, including using solar forecasting to help balance loads, producing hydrogen from solar to be injected into the local gas network, using waste-to-energy technology at waste treatment plants to produce energy and also waste for agriculture, and ideas for community solar projects that integrate on-site storage.

Simons says the issues facing the Alice Springs network need to be tackled with a degree of urgency.

“The isolated nature of the Alice Springs grid and a forecast of negative demand on the system is what makes the Alice Springs Future Grid project all the more urgent. We know that every electricity grid faces challenges associated with the transition to renewable energy, and careful management of this transition is absolutely critical in such an isolated system,” he said.

In more than one way this was big. It... Read more
System security and reliability
Solcast wind and cloud forecasts to help balance SA grid image