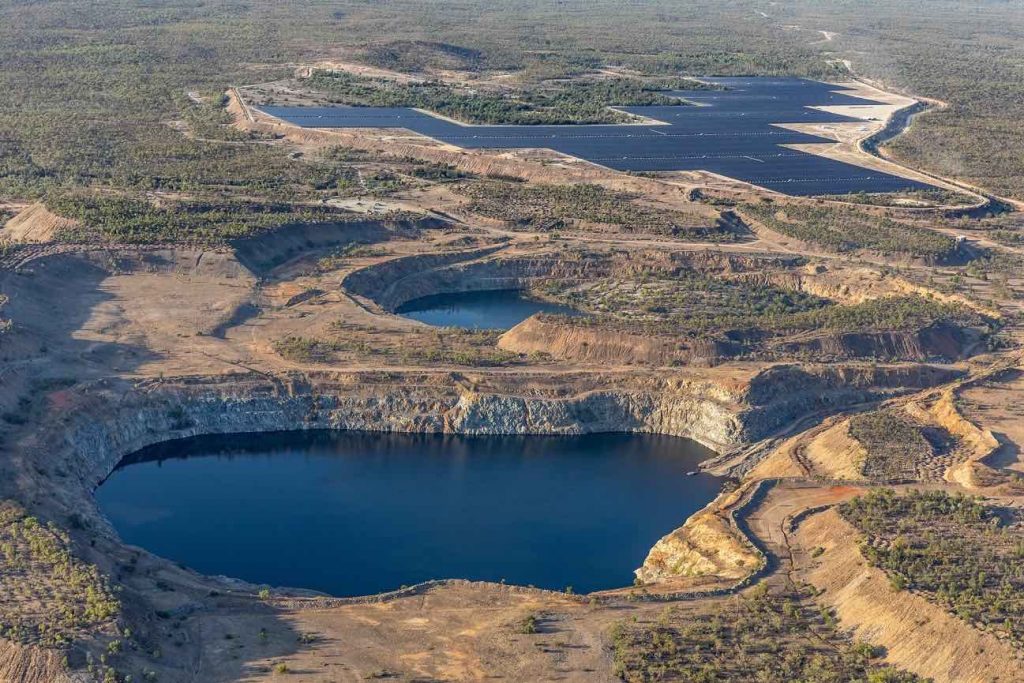 Genex's Kidston site from above showing the solar farm and mine pits. Image: Genex

ARENA has conditionally approved up to $47 million in funding for Genex to construct a pumped hydro energy storage system at the former Kidston Gold Mine in north Queensland.

The facility will store energy from a 50 MW solar farm that is already operating on the site as well as a planned 150 MW wind farm that will begin construction in 2022.

Genex’s $777 million project will essentially turn the existing mine pits into a giant battery, pumping water into an upper storage reservoir when energy prices are low, then releasing it through reversible turbines into the lower reservoir to generate power when demand for electricity is high.

The process allows energy from the solar and wind farms to be fed into the grid around the clock, providing a ‘dispatchable’ on-demand supply of electricity.

The new facility will have 250 MW capacity and 2000 MW/h of duration, providing approximately eight hours of energy storage – enough to power 143,000 homes.

The pits are a remnant of the disused open cut Kidston mine, which was the largest gold operation in the country but closed in 2001 after more than 90 years of operation

According to Genex, the plant will have a start up time of less than 30 seconds, allowing it to respond quickly to any shortages of electricity supply.

Genex CEO James Harding said the new funding will allow the project to proceed to financial close and construction to begin.

“ARENA has continued to provide support and guidance to facilitate the development and financing of the K2-Hydro Project, as the first in a series of potential private sector pumped hydro developments which will play a crucial role in balancing the increasing penetration of renewable energy into the electricity grid,” Mr Harding said.

“The development of the Kidston Pumped Storage Hydro Project at the Kidston Clean Energy Hub in Queensland will create over 500 direct jobs during construction and support remote and regional businesses and communities in a time of difficult economic global and national circumstances,” he said.

Construction of the new pumped hydro facility is expected to be completed in 2024.

ARENA is supporting the project with up to $47 million of funding as part of work to improve the way renewable energy is integrated into the electricity system. Genex has also announced that they have closed a $610 million loan from the Australian Government’s Northern Australia Infrastructure Facility, passing a key financial milestone in mid-April.

The project will be supported by equity contributions from Genex, who are raising capital for the project, and JPOWER, as a key shareholder.

A 187 kilometre transmission line, supported by the Queensland Government and Genex, will be required to connect the Kidston Renewable Energy Hub to the NEM. This transmission line is also expected to facilitate the connection of further renewable generation projects in the region.

ARENA’s newly announced funding builds on earlier support for the construction of the solar farm and early feasibility works for the pumped hydro facility.

ARENA CEO Darren Miller said the new funding will enable Genex to create a pumped hydro plant that can provide reliable, dispatchable and affordable renewable energy to the grid.

“This is a landmark project for all involved and paves the way for renewables to play a larger role in Australia’s electricity grid,” Mr Miller said.

“Genex will be delivering the first pumped hydro project in Australia since 1984 and the first to be used solely for energy storage and generation rather than water management.”

“Having championed this project from conception, and having supported pumped hydro projects across Australia, we are very excited to see this project reach financial close and commence construction,” he said.

ARENA has also supported feasibility studies into the Snowy 2.0 and ‘Battery of the nation’ pumped hydro projects, as well as a recent proposal to convert a shuttered coal mine to provide energy storage at Fassifern in the NSW Hunter Valley. ARENA is also providing up to $40 million towards South Australia’s first pumped hydro plant, as part of a competitive funding process.

Reservoirs of water are poised to pla... Read more
Hydropower / Pumped Hydro Energy Storage
View all related stories
Follow Us
Back to top