A novel approach to utilising latent heat of fusion promises a versatile and cost-effective method of storing renewable energy and filling a battery technology gap. 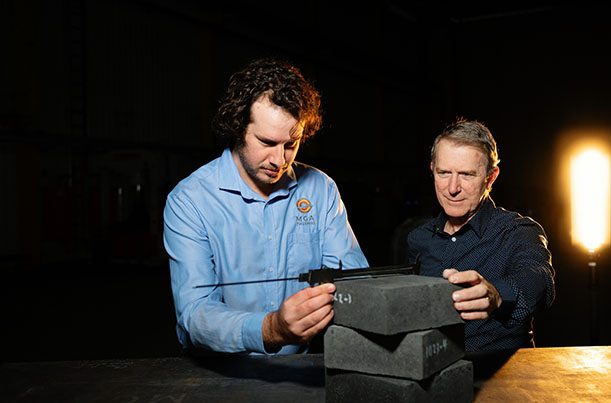 A frequent criticism of renewable energy sources such as solar or wind is one of reliability. “What happens when the sun doesn’t shine or the wind stops blowing?”

The answer is, of course, batteries.

But what kind of batteries? Lithium-ion electrical batteries are an obvious solution: easily charged, lightning fast to switch on and with sufficient storage typically to last up to four hours of continuous discharge. Hydrogen electrolysers, powered by renewable electricity, offer long-term storage options, as does pumped hydro.

Which leaves a missing middle ground.

Medium duration storage, covering a timeframe of more than four hours up to a few weeks, is seen as vital to supplying power during the evening and morning peak-demand periods when solar production is at a minimum.

Thermal energy storage (TES) has received a lot of attention as a potential solution.

Essentially, TES uses plentiful renewable energy during the day to heat a large amount of material, releasing the energy when required as the block cools down overnight.

But to capture the maximum amount of energy, thermal battery researchers have been looking into applying the well-understood principle of latent heat of fusion.

So, what is a latent heat of fusion battery?

Well, anyone who has been in a rush to make ice to cool a drink has observed the principle behind MGA Thermal’s new battery design.

Energy must be removed from the water to lower its temperature to freezing point. But that’s only the start, because even more energy must be given up by the liquid to allow its transformation to a solid.

That final bit of energy is known as the latent heat of fusion.

The latent heat of fusion released from transforming 10g of water into a smallish ice cube, would be sufficient to power an old-fashioned 100 Watt lightbulb for more than 30 seconds.

With the help of $1.27 million of ARENA funding, MGA Thermal plans to soup up that same principle to roughly the size of a shipping container, using 5000 blocks of graphite with specks of an aluminium alloy scattered throughout; a proprietary medium known as Miscible Gap Alloy (MGA).

Instead of ice cubes, think of big chocolate muffins containing lots of meltable chocolate chips. And instead of the ice melting at 0 degrees C, the alloy operates between 400-700 degrees C.

Because graphite blocks are cheap and good heat conductors, and the unit operates at high temperatures, it is both a low-cost and efficient storage system.

Renewable energy will be used to heat the blocks to their upper operating temperatures, melting the embedded aluminium alloy and storing its latent heat of fusion.

A heat exchanger system, typically using water/steam, allows dispatched thermal energy to be used directly in an industrial process, or to heat commercial or large scale residential spaces, such as apartment blocks.

Potentially, the steam could be used to drive a turbine-generator and produce electricity.

On a very large scale, it may even be possible to repurpose decommissioned fossil fuel turbines to be powered by battery generated steam. That would effectively mean a large number of MGA Thermal units could act as a grid scale energy storage facility.

MGA Thermal plans, initially, to build a 0.5 MW / 5 MWh demonstration-scale system. Enough energy, if it were entirely converted into electricity, to power a district of 600-plus homes for 10 hours.

Production of the initial 5000 thermal blocks is scheduled to be completed over 12 weeks up to mid-October 2022.

“Once completed, it will allow us to demonstrate how our technology can support the energy transition through several use cases and applications, and the operational data will boost our continuing commercial growth, helping us to meet the needs of our customers in Australia and overseas,” she said.”

“The electricity transition is going to require a variety of short, medium and long term storage technologies,” Mr Miller said.

“With potential deployments for industrial heating end uses, MGA Thermal could play an enormous role in decarbonising both the electricity grid and heavy industry.”

We love a sunburnt rooftop. A land of... Read more
Renewables for industry
The Energy Innovators: Stuart White on increasing our energy productivity image

We know we can produce energy from co... Read more
Renewables for industry
Australian businesses are making one big mistake when it comes to renewable energy. image

If there was any doubt that the Austr... Read more
Renewables for industry
View all related stories
Follow Us
Back to top