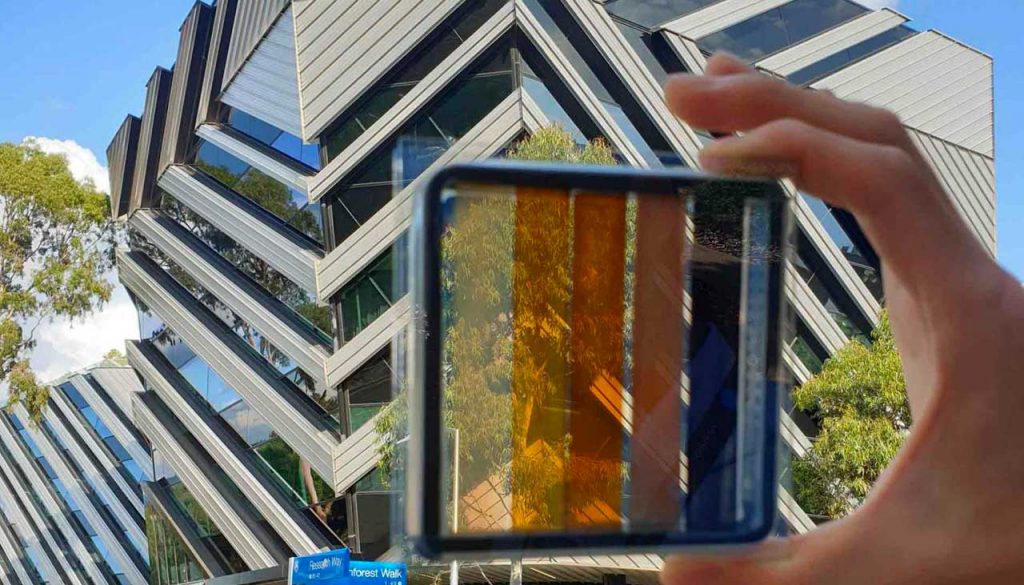 Hand holding a transparent solar panel towards the sun.

Transparent solar panels developed by Australian researchers are on track to revolutionise the way photovoltaics are integrated into buildings.

The research team, led by Professor Jacek Jasieniak from Monash University and the ARC Centre of Excellence in Exciton Science, received funding from ARENA in 2017 as part of the solar research and development program.

The next stage of the project will focus on scaling the technology, including development of prototype modules with Melbourne glass manufacturer CSR Viridian.

How is transparent solar technology progressing?

Professor Jasieniak told ARENAWIRE that the transparent solar cells have come a long way in the six years they have been working on them.

“This type of technology has been around for quite a while, it’s just that solar cell materials haven’t been sufficiently efficient.”

While prototypes first appeared in the 1980s, it has taken the application of perovskite compounds in solar panels to achieve high efficiency and stability in extremely thin cells.

“The ARENA project has enabled us to develop a critical mass of people, build some links with CSR Viridian, start to think about how we structure more efficient devices with better transparency and ultimately change the layer design to give us better stability,” he said.

It has been a collaborative effort, with Monash University and CSIRO researchers partnering to find ways to generate more energy and greater transparency. While these objectives are in conflict due to energy output falling as more light is allowed to pass through the panel, Jasieniak is confident that there are ways to continue to improve the conversion efficiency.

He explained that for a building with large windows, a transparent solar window could supply the entire energy needs of an apartment at the current level of efficiency.

“A window frontage of 20 to 40 square metres is probably sufficient with the technology here to provide the electricity for that particular apartment. Whilst they’ve typically needed almost 100 m² to deliver that same power, the fact we are getting efficiency ratings three to four times higher that what’s done at a commercial level is the game changer.”

READ MORE: A WINDOW INTO THE FUTURE? HOW YOU MIGHT ONE DAY POWER YOUR HOME OR OFFICE

Interest is already coming from builders and architects, but the panels could be a decade away from the market. Jasieniak says they are upfront about their expectations.

“We’ve been pretty open. We think it will take about ten years. But if we can keep getting investment to spin this out properly and get the right partnership structures, then maybe ten years is an easy goal to achieve.”

He is inspired by the example of Tesla, which grew rapidly by building skilled teams and attracting financial support at the key moments.

“Ten years is where we are aiming, but we would like to get there much quicker,” he said.

How will transparent solar technology be used?

While solar windows have grabbed headlines, the researchers are confident the transparent panels could be integrated more widely into building designs.

Another possible application they see is sun shades, using semi transparent panels that can be expanded to provide shelter and catch sunlight.

“Whether it’s on glass, shades or something of the sort, any one of those will make a huge impact. You could pull down a shade with a certain transparency. You could define what that is – it could be 10 per cent or 20 per cent transparency, so you still have light coming through.”

Part of their work is focused on finding ways to keep the light transmitted through the panels colour neutral and visually appealing.

Explaining the challenge, Jasieniak said, “if it is absorbing a lot in the blue and green and yellow parts of the solar spectrum, it is going to start to look brown… and nobody really wants to buy brown glass!”

They are working with glass supplier CSR Viridian – also located in Clayton in Melbourne’s south-eastern suburbs – to overcome these barriers. The next stage of the project will produce 10 cm by 10 cm prototype modules in a range of material combinations and double glazing configurations so the system can be integrated into a window.

The researchers will also explore the impact the technology could have at a global scale.

“What would it mean if we could get semi-transparent or solar windows integrated at a certain penetration in a city, with all the compromises of orientation, shading, efficiency during different seasons?”

5B “Maverick” automating the future of solar

Australian solar manufacturer 5B is s... Read more
Solar PV R&D
View all related stories
Follow Us
Back to top