This is the final report for Fulcrum 3D’s CloudCam Solar Forecasting Project. The objective of this project was to provide high accuracy short-term power forecasts utilising all-sky cameras and state-of-the-art software at Genex Power’s 50 MW Kidston Solar Farm in Queensland. 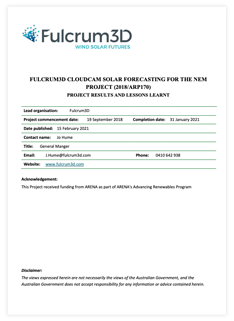 The key driver for this project was to reduce Causer Pays charges which can be incurred when a semi-scheduled generator is unable to meet the generation target set by the Australian Energy Market Operator (AEMO) dispatch system. In 2018 AEMO enabled semi-scheduled generators to submit their own five-minute forecasts through their MP5F API. It was expected that self-forecasts that are more accurate than AEMO’s forecasts would lower the solar farm’s Causer Pays penalties.

Fulcrum3D installed 9 CloudCAMs (cameras) with their associated data loggers and NBN connection at Kidston Solar Farm. These were incorporated with the existing Kidston SCADA system in conjunction with a new, highly detailed power model. The model uses data inputs from power station equipment (including inverters, dataloggers, and met stations) and models the current unconstrained generation capability.

These systems work together to produce five-minute forecasts of Kidston Solar Farm output and submit them to AEMO’s MP5F API. This forecast is now being used in dispatch and is consistently outperforming ASEFS and reducing Causer Pays charges. The project has met its contracted outcomes.

The project’s core achievement was demonstrating that it is possible to satisfy AEMO’s accuracy requirements and achieve zero Causer Pays charges at solar farms via MP5F with generators operating under normal conditions.