This final public report summarises the successes and lessons learned in developing a prototype reactos system capable of producing a kilogram of ammonia per day. 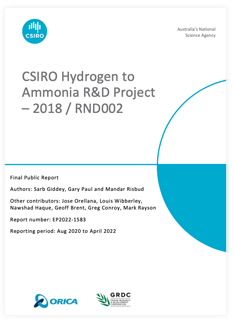 The major objective of this R&D project was to demonstrate the conversion of hydrogen to ammonia at significantly lower pressures compared to the conventional Haber-Bosch (H-B) process that requires pressures in excess of 150 bar. Orica and GRDC (Grains Research and Development Corporation) were the other project partners. Orica is a major ammonia producer in Australia, and have contributed to the designing of the ammonia synthesis reactors and flow sheeting of the process; and GRDC have contributed in providing funds to the project as well as in producing reports on the viability of using farm based biomass for ammonia production.

The scope of work in this final period of the project was to construct and operate a prototype reactor system capable of producing a kilogram of ammonia per day. The ammonia production demonstration rig has been built capable of operation at 30-50 bar pressure, 450oC temperature and producing 1 kg/day ammonia in CSIRO’s Centre for Hybrid Energy Systems (CHES). This report provides the details of the rig constructed for the production of ammonia and its operation. The demonstration rig has been operated for more than 200 hours of accumulated period, and for more than 24 hours continuous operation. The hydrogen to ammonia conversion rates, volume% of ammonia in the product stream and ammonia production rates were continuously monitored during the rig operation. The hydrogen to ammonia conversion rates and Vol% ammonia in the product stream were respectively achieved up to 14.5% and 7.5 Vol% at 30 bar pressure. These values are very encouraging when compared to those achieved by Haber-Bosch process at above 150 bar pressures in a single pass through the catalyst bed, thus clearly demonstrating the merits of this technology. The production rate of ammonia achieved by the rig operation at 30 bar pressure were up to 400g/day. These values are lower than the originally designed reactor capacity of 1 kg/day and is due to the reduced volume of the membrane reactor that was essential to overcome the reactor sealing challenges. The ammonia production rates were though found to be very stable over the time period, and somewhat improving with the duration of operation.