The Sunshine State’s big solar boom is continuing with the first of six Queensland solar farms to be funded through ARENA’s competitive large-scale solar round now underway. 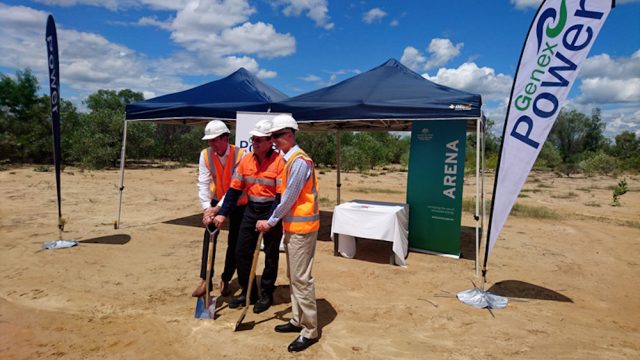 Mr Frischknecht said the project was well placed to deliver on ARENA’s efforts to accelerate Australia’s shift to renewable energy.

“ARENA is all about ensuring a smooth transition to a reliable and secure energy future with affordable renewable energy,” Mr Frischknecht said.

“The Kidston Solar Project is one of 12 new solar farms to be built through ARENA’s large-scale solar round which is well on the way to changing the face of big solar in Australia.

“The 50 MW Kidston solar farm will produce enough energy to power the equivalent of 26,500 average Australian homes each year through the National Electricity Market.

“Almost all of Australia’s current large-scale capacity has been built with ARENA support – 211 MW of a total 241 MW.

“Our competitive large-scale solar round has further accelerated the commercialisation of the sector – our $92 million support has unlocked a billion dollars of renewable energy investment and is helping to drive down costs even more.

“We’ve seen the cost of electricity from solar power plants drop to almost the same level as wind power, and it may soon be even lower.

“When complete, the Kidston Solar Project and 11 other new solar farms selected for support through ARENA’s competitive round will triple Australia’s large-scale solar capacity and deliver enough capacity to meet one tenth of the 2020 Renewable Energy Target.”

Genex Power noted the importance of the project’s location in North Queensland.

“The project benefits from having one of the best solar resources in Australia,” Managing Director Michael Addison said.

Executive Director Simon Kidston said the location of the project would also add stability to the local network in Northern Queensland.

“It will reduce the necessity for importing electricity from neighbouring areas, providing a benefit to the entire network,” Mr Kidston said.

Genex Power is a power generation development company listed on the ASX. The Company is focused on innovative clean energy generation and electricity storage solutions which deliver attractive commercial returns for shareholders. Genex is currently pursuing a number of unique energy development opportunities across Australia. With the financial closure of its 50MW Kidston Solar Project, the Company’s focus will now move onto the development of its 250MW Kidston Pumped Storage Hydro Project and the Kidston Solar Project Phase Two 270MW located at the Kidston Renewable Energy Hub, in Northern Queensland.

The Clean Energy Finance Corporation invests, applying commercial rigour, to increase the flow of finance into the clean energy sector. Our mission is to accelerate Australia’s transformation towards a more competitive economy in a carbon constrained world, by acting as a catalyst to increase investment in emissions reduction. We do this through an investment strategy focused on cleaner power solutions, including large and small-scale solar, wind and bioenergy; and a better built environment, with investments to drive more energy efficient property, vehicles, infrastructure, and industry. The CEFC also invests with co-financiers to develop new sources of capital for the clean energy sector, including climate bonds, equity funds, aggregation facilities and other financial solutions. The CEFC operates under the Clean Energy Finance Corporation Act 2012. For more information, visit the Clean Energy Finance Corporation.