Could electric vehicles be charged with solar panels built into the roof of the car? 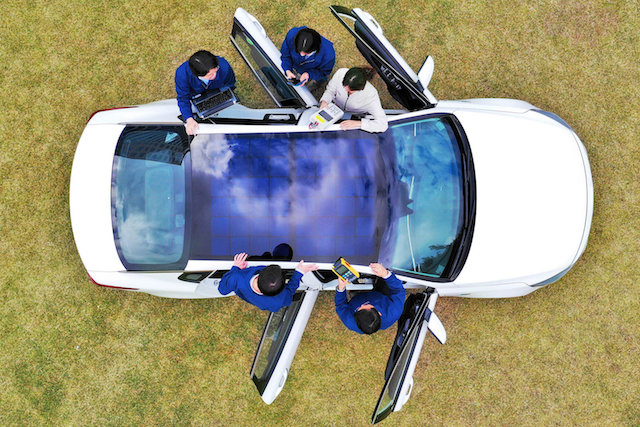 Arial view of an electric vehicle with doors open.

Hyundai and Kia think it is possible, promising to release electric car models with a solar ‘sunroof’ as soon as next year.

The new solar technology will be first be made available in hybrid models, but later be rolled out across the plug in and internal combustion ranges.

Clean, quiet and with increasingly impressive performance, the electric vehicle revolution is accelerating. Research released earlier this year by ARENA predicts that EVs will reach price parity with petrol powered cars in the early 2020s, and make up all new vehicle sales by the mid 2040s.

Charging the growing numbers of electric vehicles will be a challenge, but one Kia and Hyundai think could partially be offset with inbuilt rooftop solar panels.

The Hyundai Motor Group is developing three types of solar roof charging systems. The first-generation silicon solar roof will be fitted to the Sonata and Ioniq hybrid models, followed by a semi-transparent solar roof system for internal combustion engined vehicles, and a third-generation lightweight ‘solar-lid’ for plug in electrics.

They expect the first generation of the new solar sunroofs will have capacity to charge batteries by between 30 and 60 per cent. That sounds impressive, but the size of the batteries needs to be factored in – Hyundai’s hybrids are powered by a small 1.5 kWh battery. In comparison, the Tesla Model S battery is nearly 55 times the size, storying 85 kWh of energy.

Hyundai plans to integrate the semi-transparent solar panels with a panoramic sunroof to let light into the cabin while also potentially powering the car’s electronics and climate controls.

Testing is already underway, with the option fully electric cars utilising solar panels applied to the roof and bonnet of the vehicle to maximise the charging capacity.

In a statement, the Hyundai Motor Group say the systems will help motorists to take some control of their energy generation.

“In the future, various types of electricity generating technologies, including the solar charging system, will be connected to vehicles,” said Jeong-Gil Park, Executive Vice President of Engineering Design Division of Hyundai Motor Group.

“This will enable them to develop from a passive device that consumes energy to a solution that actively generates energy,” he said.

Hyundai say the first generation of the new technology will be integrated into its vehicles after 2019 as one measure to improve vehicle fuel efficiency and meet global regulations targets.

Can solar panels on the roof of an EV generate enough electricity to power the car? The short answer is no. Electric vehicles consume a lot of energy, solar panels are large and there is little available space on a car roof.

Toyota currently offer a solar roof on their Prius prime hybrid model, which is available in Japan. The $2500 option adds less than 6 km of range, assuming the car is parked in direct sunlight.

Based on current technology, it is more efficient and cost effective to put solar panels on rooftops than electric vehicle. This is because cars are often not parked in direct sunlight, they are more vulnerable to damage that buildings, and their lifespan is generally less than rooftop solar installations which can last 20 years.

But while there may not be enough roof space to generate the energy required to power a car today, technology is advancing quickly and on-board solar power could play a greater role in the future.