Innovation Bay and ARENA brought together a who’s who of renewable energy for our first matchmaking dinner. 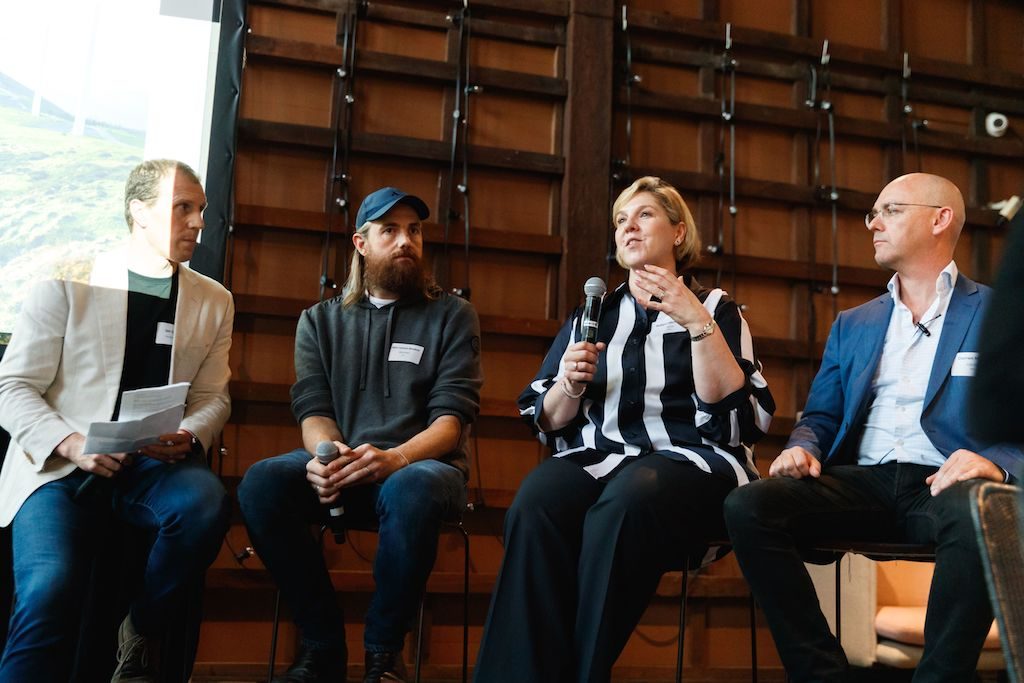 Mike Cannon-Brookes and Robyn Denholm appeared on the 2019 panel.

Startups often dread and lament the so-called “valley of death” — the period in the life of a startup between when it begins operations and when it starts generating revenue.

One of the keys to getting game-changing renewable energy technologies off the ground, and the key to helping renewable energy startups survive this fraught period is to help pair promising founders and developers with great ideas with the right financiers to bring those ideas to fruition.

In a bid to help bridge this valley, ARENA last week partnered with Innovation Bay to do just that: giving five of Australia’s brightest renewable energy startups the opportunity to pitch to the Australian investment community.

Since 2003, Innovation Bay has been holding investor dinners that aim to help play matchmaker for all kinds of startups and investors. After more than 70 dinners, this was the first time renewable energy had been the focus. Innovation Bay co-founder Ian Gardiner said the popularity of the event was proof of the excitement surrounding renewable energy in Australia.

The sold-out dinner held on the waterfront in Wooloomooloo gathered together a literal who’s who of renewable energy and clean technology from across the ecosystem — including entrepreneurs, startup accelerators, energy providers, energy market bodies, government agencies — alongside investors and venture capitalists.

The full-house came to hear from the star studded lineup of panelists including Atlassian co-founder Mike Cannon-Brookes and Tesla chair Robyn Denholm who joined ARENA CEO Darren Miller in the hot seat.

The pairing of the ARENA CEO and Mr Cannon-Brookes was a unique twist of fate — the latter was in the audience over 10 years prior when Darren Miller pitched at an Innovation Bay event for funding for his own startup.

In a lively discussion, the trio talked about their own lessons learned, the challenges of running a startup and their advice to startups — including the importance of looking after your mental health.

The panel discussed the importance of “lighthouse” projects in renewable energy — audacious projects that push the boundaries of what can be done and pave the way for more. The panelists reflected on the success of the 100MW Hornsdale Power Reserve battery, which famously began as a bet between Mr Cannon-Brookes and Tesla’s founder Elon Musk on Twitter.

The panelists also agreed on their optimism about Australia’s unique and massive opportunity to capitalise on the energy transition — including the potential for hydrogen or extra long undersea cables to help us export our sunshine overseas.

The panelists also talked about what is needed to get us there — including recognising that economics must drive the transition: clean energy technologies must be faster, cheaper and better to be adopted at scale.

Following the panel discussion it was on to the main event: Pitch time!

Over 40 startups applied to be part of the night and five were selected to pitch by an independent investment committee. The five startups vying for investors included:

After each pitch, the attendees were asked to rate the presentation out of five and provide feedback to each founder via an online app. With some of Australia’s pre-eminent renewable energy experts, venture capitalists, family office investors and energy companies in the room, this proved significantly valuable to the founders.

While all the startups gave strong pitches, the winner for best pitch of the evening by popular vote was 5B.

5B’s Chris McGrath told the crowd the company started from the premise that one would build solar farms differently if starting from scratch today. With that in mind, the company developed the ‘Maverick’, their modular pre-fabricated solar panels which can be built in a factory and installed onsite five times faster than conventional solar PV. 5B’s Maverick design is not only faster and cheaper, but also requires fewer workers.

Having started in a backyard in 2013, the company is now running out of a warehouse in Alexandria and has now rolled out its Maverick design in a wide range of sites across Australia including in the Northern Territory as part of the Solar SETuP project co-funded by ARENA and the Northern Territory Government, in South Australia as part of Santos’ project to power their beam pumps with solar and on brownfield former landfill sites.

While 5B was the trophy winner on the evening, the evening was successful not just for those who pitched but for forming valuable connections between startups, investors and industry attendees.

Australia’s energy market is a prom... Read more
General
The Innovators podcast: An engineer’s party of one image

More than once signs have pointed Nad... Read more
General
ARENA looks to the future amid renewable boom image

Some of Australia’s largest energy ... Read more
General
View all related stories
Follow Us
Back to top