The customer might always be right, the maxim has it, but when it comes to meeting the challenges thrown up by our complex and changing electricity market the customer is not always right at the centre of what’s going on. 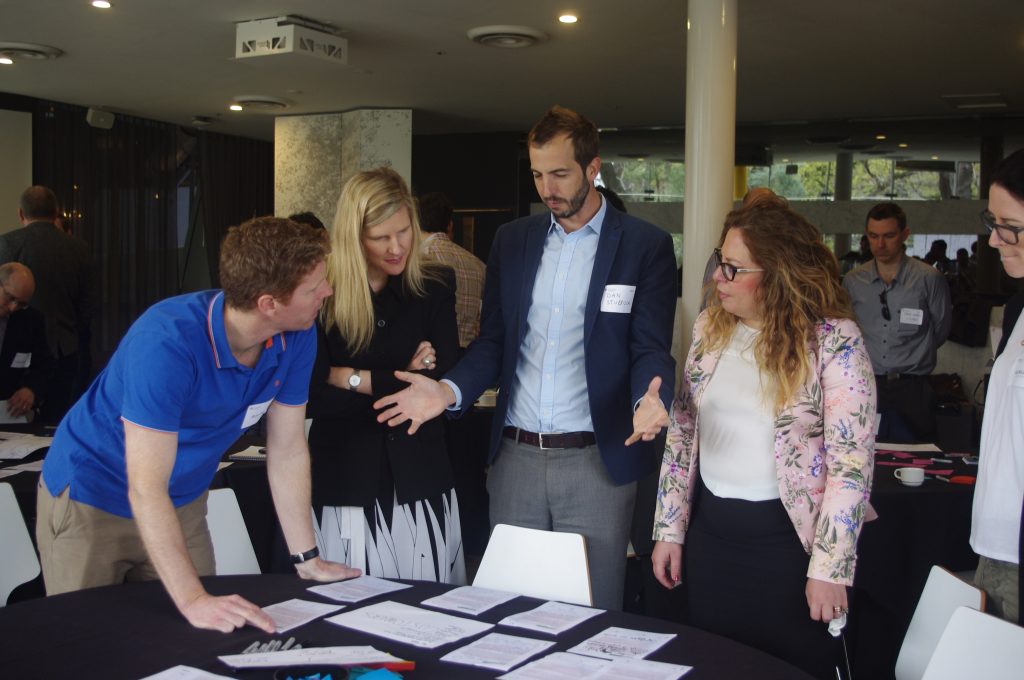 That is an idea that needs to change and, with that in mind, around 60 of the top thinkers from across the nation’s energy sector gathered in Melbourne recently for an ARENA A-Lab event.

The topic for discussion was the Roadmap released by Energy Networks Australia earlier this year. That document strives to reimagine what the energy system of the future will look like and then works backwards to figure out what changes the industry needs to make in order to get there.

It’s a mission that calls for big ideas and, over the course of two days, many were flying around.

What if an army of homes equipped with rooftop solar functioned intuitively in times of trouble, like a school of fish scattering to evade a shark?

What if a whole state could be 100 per cent powered by rooftop solar just by making a few simple changes to when we heat our hot water?

What is “the broadband of energy” and how can we create it for customers?

These were bold ideas, to be sure, but certainly not fairy-tales. Despite that, they were put through the creative wringer using a design methodology known as The Disney creative strategy.

The challenge facing those in the room was to come up with proposals for a distribution system operator (DSO). In practice that meant designing new mechanisms to coordinate and make sense of a system that is rapidly transforming.

It’s a system in which individuals have moved from being passive recipients of electricity to prosumers: active participants in a complex system who generate, manage, distribute and also consume electricity at different times and in different ways.

It’s also a system that is increasingly awash with what are called distributed energy resources (DERs) such as rooftop solar panels or home battery storage systems. These resources diversify our electricity supply and reduce our dependence on carbon-intensive methods for generating electricity. But in doing so they also bring new layers of complexity that must be creatively addressed.

Participants from across the energy sector including state government power authorities, power companies, behind the meter technology specialists such as Wattwatchers and Redback Technologies and consumer rights advocates came together for two days of targeted brainstorming with the goal of unearthing ideas and then developing them into specific proposals.

This is how ARENA does innovation. It’s a process that is designed to lay out a path from idea to project, from brainstorm to reality. And to get there at warp speed.

Day one, with a loose format in which creative thinking and risk-taking are encouraged, produced 70 ideas, ranging from the intriguing to the arguably-impractical.

Discussion focused around one dominant question: How well do we think the electricity market engages with consumers?

“We need more simplicity” offers one group. “At the end of the exercise yesterday, we had notes everywhere but I still couldn’t see where the customer was,” says another.

“Look at Uber” says a third. “It’s a complex process for them, they have drivers to organise, software, whole systems. But as a customer all I see is ‘your car will be there in 3 minutes’. Complexity is ok if the customer doesn’t see it all.”

ARENA’s Phil Cohn, who is driving the session, urges those present to stay the course.

“You really stretched yourselves yesterday to be audacious and creative, there’s temptation today to be a bit safer and incremental,” he says. “That’s not what we want at A-Lab. We are here to push the boundaries and come up with real innovations.”

By mid morning of day two, those 70 ideas have coalesced into seven themes: Each of these becomes a table and a team forms around it. Ideas are stripped down from the wall and handed out. The Disney creative strategy begins.

This method, based on the three different sides to his creativity that Walt Disney identified, breaks the process of innovation down into three distinct personality types: Dreamers, realists and spoilers. Each type is considered invaluable to the process and becomes a step for the group to undertake.

The order goes something like this: First, what are the most fantastic and absurd ideas?

Then, How can they be made more practical?

Finally, it’s time to be a critic and shoot holes in the idea. Can it survive this process?

Teams of up to 10 go through each stage, filling out a template called an idea canvas. First, the idea itself: what might be possible? Now a new canvas. Here each team looks at questions like “how long will it take to realise?” “How much will it cost” The day shifts into developing what will soon be focused pitches as team members try to probe each idea for weaknesses. Does it hold up?

As the process concludes, each team is ready to deliver their pitch to a panel of experts known as the ‘dolphin tank’ (a friendlier shark tank). On this day it features some of the sharpest minds in the field. ARENA Chief Executive Ivor Frischknecht, AEMO CEO Audrey Zibelman, Energy Networks Australia Chief Andrew Dillon and CSIRO’s Director of Energy Research, Glenn Platt.

As the pitches roll on it is clear each shares a similar goal: to place consumers at the center of whatever reforms are necessary to shape our future energy system. A fortnight hence, contributors will be getting back together for an Incubate A-Lab, where the ideas that survive the dolphin tank will start being prepared and tested as potential projects.

Another team posits the idea of a “Consumer insights lab”. This proposed pilot project would look at how to include and involve consumers in the process of innovating. It would begin by selecting a group of energy consumers and embedding them in the A-Lab process – using them as both sounding board and review panel for new projects.

Team 3 offers up a seemingly fantastical notion, but one grounded in the science of information technology and the emerging field of biomimicry. This group wants to test and develop a “swarm-based” model for grid architecture and decentralised control.

The analogy is a school of fish. When a shark arrives, no single actor coordinates the way each fish interacts with its neighbour so that the school as a whole scatters and evades the hungry predator. The behaviour is instinctive and inbuilt but also cooperative. Models that attempt to replicate this have been used in the telecommunications industry. In an energy world increasingly made up of DER’s such as individual homes with solar and battery systems could a way be found for them to talk to each other when blackout events threaten the grid, reducing the need for centralised control?

“Could this be trialled on a smaller scale?” The dolphins ask. “Maybe in a town or regional centre?”

Over two days participants made new connections, saw familiar problems from unfamiliar vantage points and started down a path that is very much aimed at making innovation feel like a surmountable challenge.

Ideas are now taking shape that will be developed over coming months, through A-Lab’s three-stage process.

We’re really excited to see where they might end up.

Do you have a high tech home with sol... Read more
Distributed energy resources
Electrifying our lives with Professor Renate Egan image

Working on solar since the 1990s, Pro... Read more
Distributed energy resources
View all related stories
Follow Us
Back to top