ARENA has thrown its weight behind a plan to turn a disused mine in South Australia into a pumped hydro plant, unlocking new value from legacy mining operations for the benefit of future generations. 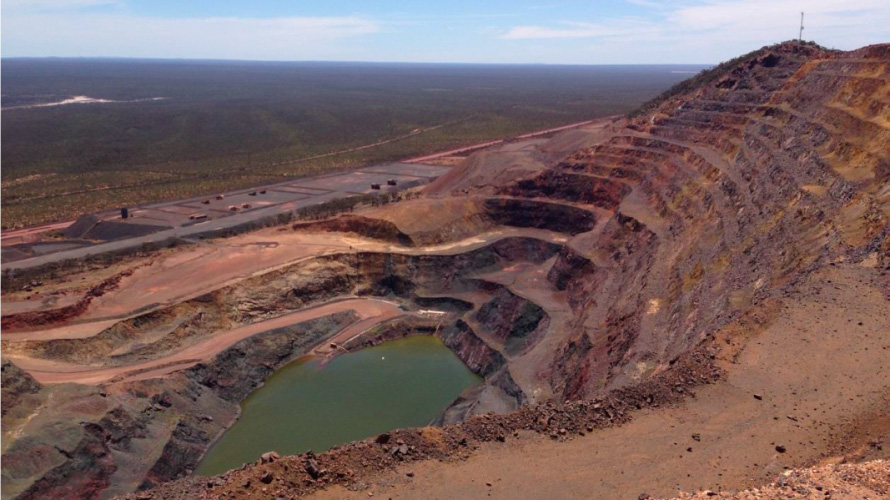 Arial view of the Iron Duchess mine.

Through the Australian Government, ARENA will help fund a $1.7 million feasibility study to investigate how the pit of the old Iron Duchess North mine on the Eyre Peninsula could be used as the lower reservoir of a pumped hydro plant with an estimated capacity of 90 MW and 390 MWh.

The project is being run by GFG Alliance. The first stage of the feasibility study is expected to be completed this year and if indications are positive, the plant could be in operation by 2022.

Pumped hydro works by using electricity to pump water uphill when power is cheap and abundant, and then running it downhill to drive turbines when demand is high or there is a lack of wind or sun.

The gravitational potential energy stored by pumped hydro facilities can be converted back into electricity within seconds of demand on the power grid becoming apparent.

The GFG Alliance’s operations span over 30 countries, including Australia.

It owns the disused Iron Duchess North mine, which is located in the Middleback Ranges. The region has been a source of iron ore for over a century, particularly to feed the nearby Whyalla Steelworks, which GFG purchased in 2017.

The pumped hydro feasibility study will be conducted by local South Australian company SIMEC ZEN Energy, which also became part of GFG in 2017.

GFG chairman Sanjeev Gupta believes lower power prices are the missing ingredient needed to spark an industrial renaissance in Australia, and he has committed to building 1GW of solar energy and energy storage capacity in South Australia.

“The cost of solar and wind is rapidly declining globally with the evolution of technology and economies of scale,’’ Mr Gupta said.

Way of the future

“As a result there is now a lot of interest in opportunities for large-scale energy storage options, as we know there will be a need to harness and store this capacity so it is available at all times,’’ said Mr Frischknecht.

“We are excited to explore the potential of old mining assets being turned into renewable energy storage which can provide dispatchable and reliable power to support our future energy system.’’

Geoff Titus, CEO of feasibility study leader ZEN Energy, said the project would offer many benefits for the company and local residents.

“We thank ARENA for their support to this important project,’’ said Titus.

“This unique pumped hydro storage project is a great opportunity for ZEN Energy to obtain real-world insights and apply the learnings to offer expert energy contracting solutions to customers seeking secure, affordable and low-emission energy to transition through their current energy challenges.’’

One of Australia’s oldest and most ... Read more
Hydropower / Pumped Hydro Energy Storage
The plan from Snowy River image