Knowledge at the frontier: DeGrussa copper mine

Stepping off the coach that ferries people from the DeGrussa copper mine airport to a village designed for workers and visitors, you’re met with a dry illustration of what it’s like keeping people entertained at the frontier of civilisation – the first building you see is marked ‘GOLF SIMULATOR’. 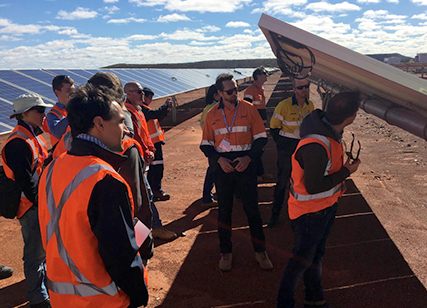 The challenges of maintaining reliable electricity at the DeGrussa copper mine, a remote mine 900km from Perth, offer a small-scale analogue of those facing the larger electricity network in Australia. A simulator of sorts, themselves.

The recent integration of new renewable energy technology at the DeGrussa copper mine site provides an exciting glimpse into how these challenges can be managed. But perhaps just as importantly, in line with ARENA’s knowledge sharing mandate, the project serves as a model for the mining industry and for people who are looking to invest in, build and operate renewable energy in Australia.

On Tuesday June 27, ARENA joined with mine owners Sandfire Resources, project owners neoen and developers/operators juwi Renewable Energy to arrange a site visit for mining industry leaders. The day was dedicated to sharing what happens at the leading edge of renewable energy development.

The harsh conditions and high demands of DeGrussa only add to the unforgiving stress test of this new, innovative combination of generation technologies.

More than 34,000 solar PV panels (clamped to a single-axis motorised rod that tracks the movement of the sun) over 20 hectares and a 6 megawatt (1.8 megawatt hours) lithium-ion battery storage facility help supply the round the clock mining operation and village, reducing the site’s reliance on the existing diesel generators by up to 20 per cent.

How does the DeGrussa copper mine battery system work?

The DeGrussa copper mine is at the frontier of high renewable energy fractions in an isolated system that must meet industrial and residential requirements. Conversation during the site visit regularly gravitated towards to a key focus point – the complex interplay between the three technologies.

Juwi’s presentation included one such example, an illustration of how the battery system is used to smooth the output of the solar system during a cloud event:

At night, the battery system provides “auxiliary services” to the DeGrussa grid, including frequency control, power factor correction and spinning reserve – tools that ensure the balance between supply and demand is kept within a tight band of stability and system security.

Regulating harmony between three very different technologies supplying power to a huge mining operation is a data-heavy process requiring monitoring and optimisation. A centralised ‘brain’ controls the very discrete and unique ‘organs’ of the DeGrussa grid, storing more than 250 metrics on performance in the system.

It’s information that’s highly valuable to other mining operations considering similar installations and ARENA is working with the proponents to make this information available over time.

Questions about the DeGrussa copper mine

The technical nuances of managing such a complex project are well suited to ARENA’s unique role facilitating knowledge sharing among stakeholders. As attendees stood among the rows of panels, walked through the guts of the battery system and inverters, or took part in the scheduled Q&A session, the questions kept coming.

‘How does the control scheme for spinning reserve work?’

‘What’s the lifespan of the battery system?’

‘Does a tracking solar system perform better than a fixed system with more panels?’

Knowledge sharing is a core part of ARENA’s mandate, and this site visit was an attempt to go about it more creatively, for ARENA itself to act as a valuable conduit for networking and information transfer.

The operational details of integrating high renewable energy fractions into an isolated grid are vital to those considering investing in exciting new projects, as was clear from the conversations springing to life during every moment of the visit.

The visitors also heard from the project’s developers, who professed a distinct sense of ownership and pride about their work on what is the world’s largest combined solar and battery system on an isolated mine.

“These are my babies,” one of the developers said.

The visit made clear that a more intangible gain exists beyond the purely operational benefits of solar and battery integration. Employees, visitors and owners can feel real pride in experiencing the leading edge of the coming together of two industries that historically have sat at the opposite ends of an ideological continuum.

ARENA’s knowledge sharing efforts bring people with real-world experience together with those who are keen to soak up the wealth of information gleaned at the frontier of innovative renewable energy. The site visit was a new attempt to forge those connections by exposing industry leaders to a project in situ. It was only made possible thanks to the cooperation of Sandfire Resources, neoen and juwi, who were instrumental in making the visit such a resounding success.

This article was originally written by Ketan Joshi.

Darren Miller: Investing in the building blocks for net zero

Would you be more likely to buy a pro... Read more
Renewables for industry
View all related stories
Follow Us
Back to top