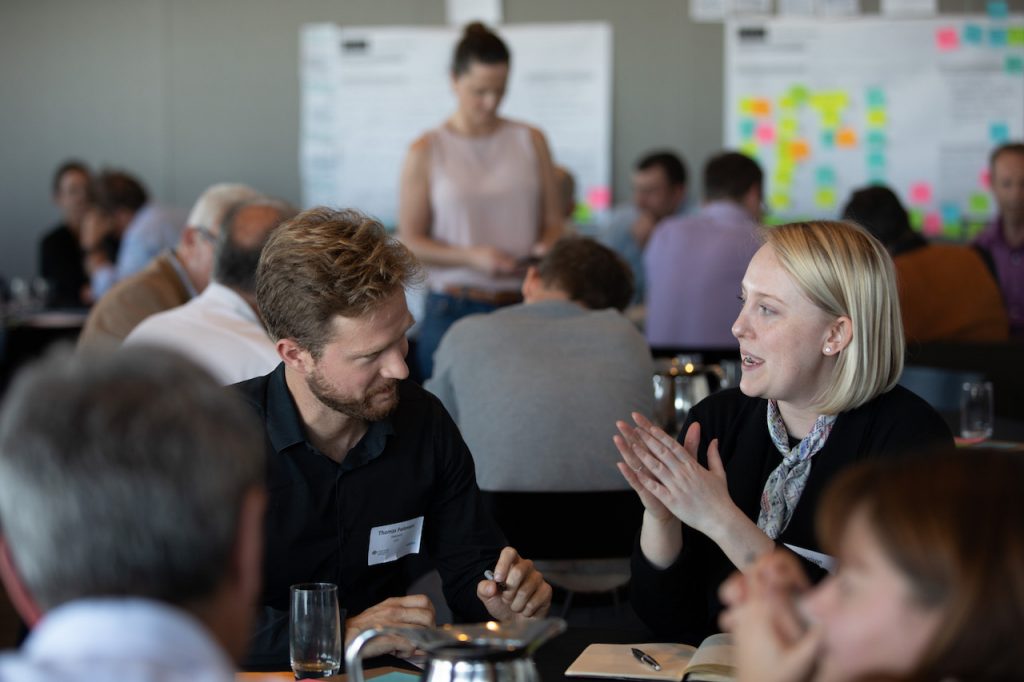 Over two days, industry experts from the electricity, gas, transport sectors and beyond brainstormed a list of opportunities for ARENA funding in renewable hydrogen, including:

Among these ideas, participants also suggested exploring the opportunity to power an off-grid mine with hydrogen, develop infrastructure for hydrogen exports and examine potential for green fertiliser.

Discussion focused on more than just the technical and commercial challenges associated with scaling up a hydrogen economy. Participants were conscious of the need to ensure there is robust community engagement and a social license to operate, alongside governance and regulatory frameworks that support the growth of the hydrogen industry. Education, training and providing opportunities to upskill the workforce of the future were identified as critical.

Over the two days attendees broke into nine small groups to develop project ideas to pitch to the Dolphin Tank (friendlier than sharks). ARENA’s Matt Walden and ARENA Advisory Panel members Heidi Sick and Susan Mallan interrogated the ideas and provided guidance on how they could be improved.

Based on the strong track-record of A-Lab ideas developing real-world projects, it is a safe bet that we will hear more about relationships and project ideas formed in future.

When addressing the A Lab workshop on the first day, ARENA’s CEO Darren Miller described the potential for Australia with hydrogen as a “moonshot opportunity”.

ARENA’s Investment Director Matt Walden said hydrogen has the potential to play a major role in our future electricity, gas and transport sectors.

“As other countries look to hydrogen as the fuel of the future to help them transition to a low carbon economy, there is expected to be significant growth in demand for renewable hydrogen globally. This presents a huge export opportunity for Australia,” Matt Walden said.

“To get there, we need to build up our domestic renewable hydrogen industry which will involve scaling up production, creating new supply and value chains, building skills and capacity among a new workforce and finding consumers who can be the end users in Australia.”

ARENA is supporting some of the first renewable hydrogen projects in Australia, including gas giant ATCO’s hydrogen microgrid hub in Perth’s suburbs, Jemena’s power to gas grid injection trial project in Sydney, and Toyota’s Hydrogen Centre at the former car assembly factory at Altona in Melbourne.

“A lot of the focus at the moment is on the longer term opportunity. Our focus is on what do we do in the immediate future to get there, what is the next step or the first step?

“We wanted to consult broadly on what are we can fund in the short term that might help address both technical and commercial barriers to hydrogen uptake, and might help scale this up quickly,” he said.

“We’re grateful to all of those who took time out of their busy schedules and put their heads together. Based on what we’ve heard, ARENA will now seek to shape our funding for future hydrogen projects. The A-Lab will help not only inform and drive our thinking, but will also hopefully spark ideas and conversations among industry players who can now work together to bring projects to fruition.”

With submissions having just closed last week on the COAG Energy Council’s National Hydrogen Strategy Taskforce’s series of discussion papers, the group focussed on tangible next steps to help realise the potential of hydrogen, not debate further whether the potential exists.

A-Lab’s next innovation lab is the three-day Incubate 2019 event in Sydney on September 11-13 2019. Ten teams from across the energy sector are selected to fast track their energy innovation ideas from concept to investment-ready project proposal. Applications to be one of the chosen teams are open until Friday, August 2, 2019.

If millions of Australian households ... Read more
Renewables for industry
Solar power in India: what a lightbulb moment image

There aren’t many people who co... Read more
Renewables for industry
View all related stories
Follow Us
Back to top