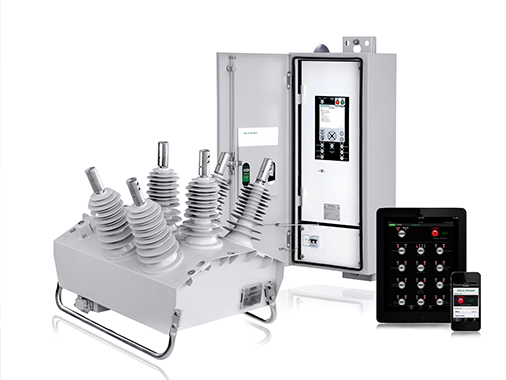 “This new Australian-led technology will not only create a new innovation we can export to the world but will also benefit our whole electricity system by giving us greater visibility over our distribution networks and allowing for more variable renewable energy,” ARENA Chief Executive Ivor Frischknecht said.

It’s an important announcement, and a piece of technology that should eventually lead to lower power prices for consumers. It will also allow Australia to lead the way in addressing one of the main handbrakes to feeding more renewable energy into existing networks.

So what does it really mean?

It’s all about visibility. Energy operators currently record voltage and current as key inputs into power system monitoring. The smart Switchgear aims to play an important role in this.

A switchgear is a type of complex circuit breaker positioned at key points of the overhead power network that protects the broader network against faults. When a fault occurs a heavy current often flows through equipment, threatening damage to parts of the system and disruption to users’ power supply. A switchgear acts to prevent damage by shutting down power at the site of the fault.

NOJA Power’s big breakthrough is that, once developed, the smart switchgear, would allow the capture of GPS time-aligned, voltage and current, and measure phase angles with extreme precision – commonly referred as synchrophasor measurements.

Phase angles measure the distance between different points on an electrical waveform difference. Importantly, increasing degree separation between relative phase angles can be used as a leading indicator for grid stress.

The synchronised nature of these measurements will allow grid operators to accurately see the condition of the grid in real time and compare and assess the impact of troublesome pockets on other areas on the grid.

Americans have been working hard to improve visibility since blackouts left most of the United States West Coast without power in 1996. NOJA Power’s switchgear offers a solution.

The synchrophasor technology the new switchgear will use can capture power system data up to 100 times more frequently than the conventional monitoring technologies we’re mostly operating in Australia right now (these are known as supervisory control and data acquisition or SCADA).

A report from the California Energy Commission likened the current technology used to monitor and operate the grid to driving a car at 100 kilometers per hour in fog while being able to open your eyes only once every 4 seconds. That means road hazards and safety information can easily be missed.

In contrast, new synchrophasor-based measurement systems make the fog vanish and allows you to open your eyes up to 30 times per second.

The North American SynchroPhasor Initiative compares the visibility improvement from SCADA to synchrophasors to reading an MRI rather than an x-ray. Simply put: you an get a much better picture of what is really going on.

Mapping the grid in detail with smart switchgear technology will dramatically increase the usefulness of post-blackout analysis and decrease how long it takes to work out what’s gone wrong when a fault occurs.

Because the smart switchgear can detect when phase angles are separating, it is able to give operators advanced warning when faults are about to happen and allow intervention to stop them. That should mean fewer outages for consumers. It is believed that the technology could have prevented the blackouts that affected large parts of North America in the 1990s.

Greater visibility of what is going on at different points in the network will allow both the Australian Energy Market Operator (AEMO) and network operators who deliver power to consumers the ability to better plan how they manage electrical networks and respond much more effectively when problems occur.

Being able to see in greater detail what electricity is doing across the network means wind and solar farms can increase supply. Distributors can accept more power because they can run renewable energy generating technology at higher capacity levels.

This helps to address one of the key challenges to renewable energy uptake. The intermittency of wind and solar makes the grid more complex and less predictable. As a result, many renewable energy sources have limits placed upon how much energy they are allowed to contribute to the grid.

Smart switchgear technology will go a long way in solving intermittency challenges because advanced monitoring facilitates increased efficiency. It’s expected that, as a result, limitations on the amount of renewable energy feeding into the grid should be reduced.

And that should help bring down energy prices

A report by the California Energy Commission found that the fact synchrophasor technology allows power operators to run closer to their thermal limits without risking blackouts could save Californians up to a combined US$19 million a year in power bills.

Prices should also come down because more comprehensive data will help new wind and solar farms generate more energy on the network and in turn make them cheaper to finance and therefore easier to build.

Right now, connecting a new generator to the grid can be an expensive process. The smart switchgear should allow this to be standardised in a way that can save a renewable energy generator up to 75 per cent of the current cost. That has the capacity to both reduce the cost passed on to consumers and also to improve the economic viability of renewable energy projects.

Why is ARENA investing?

Smart switchgear kits will help us transition to a low carbon future where renewable energy meets our needs as a society. ARENA is charged with helping to catalyse Australia’s shift to that future state.

But this project also aligns with ARENA’s determination to accelerate the transition to renewables by sharing knowledge and bringing operators within the sector together to create better ways of doing things.

Smart switchgear devices are proven to be most effective if their data is shared freely. Americans have been using similar technology but in the US the data isn’t being shared across organisations in a way that will necessarily stop outages from spreading, as was the case in the 2011 San Diego blackout.

With the NOJA Power switchgear, captured data will be shared between ARENA, the Australian Energy Market Operator (AEMO), Deakin University and the University of Queensland as well as AusNet and Energy Queensland.

“This is a great example of government, industry and universities working together and collaborating to develop real solutions to tomorrow’s technical challenges on the distribution network,” says NOJA Power Group Managing Director Neil O’Sullivan.

Sharing the data widely also helps guard against commercial operators using it to gain a competitive advantage. If the data is monopolised it could take longer for energy prices to fall. ARENA has a role to play in helping to ensure that information gathered from the grid remains free and available and works to the advantage of consumers.