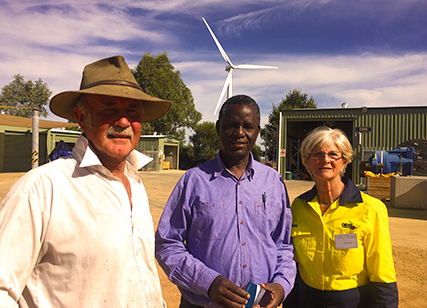 The twin hills of Emu Downs, 200km North of Perth in Western Australia, are equally inhospitable and welcoming, a combination that has helped the new industries of solar and wind energy to thrive.

This is a land of contrast and change: A Mediterranean-style climate that’s wet in winter and dry in summer, brown sandy soil that shows where the ancient coastline used to be, and flora that’s toxic to farming animals like sheep, cattle and horses.

It is tough country for agriculture. And that has left more of the wide, sun-drenched land available for emerging industries like solar and wind energy. The Emu Downs wind farm has been here in the tiny town of Badgingarra for about ten years. Now there is a solar farm being built next door.

Janine Ackland was once a city girl, but was embraced by the area after she married a local farmer. She works in the wind farm administration and she can see community benefits of the Solar Farm. Ackland says: “A lot of the people that are involved, the contractors or the labour force, are actually from the (nearby) coastal towns – Cervantes or Jurian Bay – we’ve got a couple of local earthworks and the water is coming from a local farm.”

The Solar Farm will complement dips in wind energy generation, filling those gaps to create a consistent stream of power. Construction will also bring a boost to the local economy. The Badgingarra locals are already convinced of the benefits of renewable energy. Looking at it as a snapshot of ARENA’s broader investment in solar energy, it’s also easy to see the overall benefits for Australia.

ARENA has contributed $90 million across twelve large-scale solar projects since 2016. This has unlocked about $1 billion in investment. That means that 90 per cent of the cost to construct these 12 large scale solar farms has been attracted from investors and renewable energy innovators. It is a stunning success story.

This is the last episode in this series of ReWired. If you haven’t listened to the other episodes please do.

We’re hoping to soon bring you more of these stories of renewable energy projects from all over Australia. Subscribe so you can be the first ones to hear these fascinating tales.

Revolutionising the energy network, one LED light at a time

Could something as simple as switchin... Read more
Solar energy
View all related stories
Follow Us
Back to top