As Prime Minister Malcolm Turnbull surveyed the site of the future project known as Snowy 2.0 he could not have been clearer about the importance he is placing upon it. 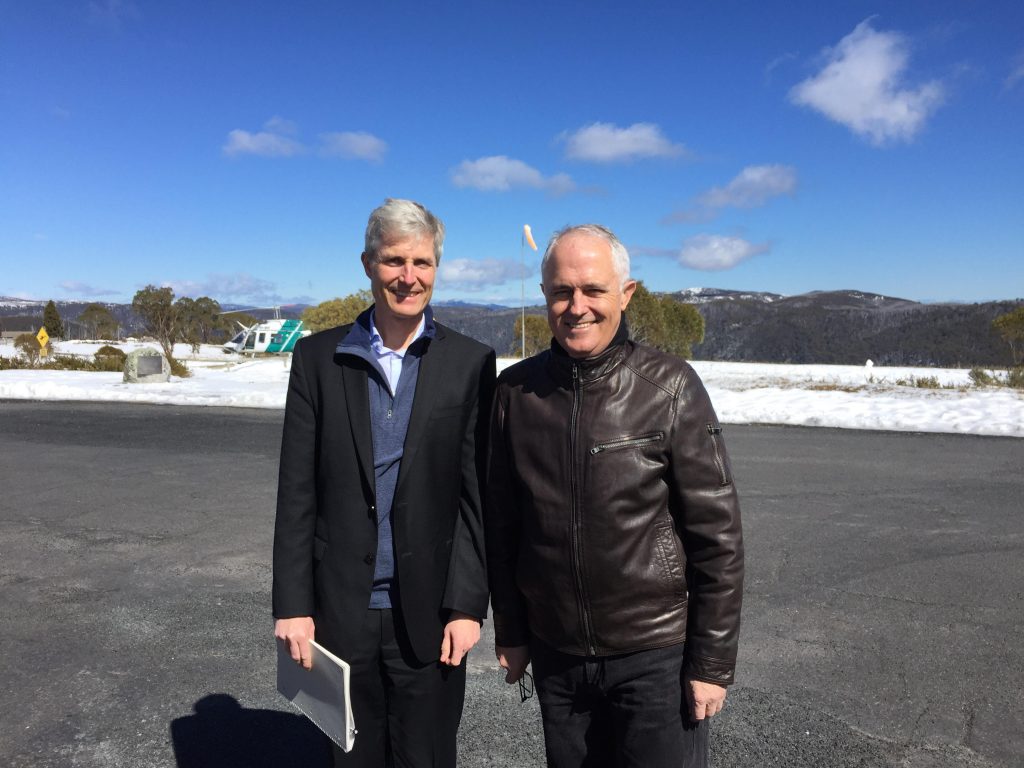 “This is going to be vital,” Mr Turnbull said. “This is about making renewables reliable.”

That idea – making renewables reliable – is at the heart of the ambitious project. It is also why the Australian Renewable Energy Agency is committing $8 million towards the $29 million cost of the feasibility study.

“This is all about the cost of electricity,” the Prime Minister said. “The sun doesn’t shine all the time and the wind doesn’t blow all the time. So you need storage.”

Early work on the feasibility study is already underway, creating 350 jobs. If the study recommends proceeding with the project, and that decision is made by Snowy Hydro, it’s expected that around 5000 jobs will be created as a result.

ARENA Chief Executive Ivor Frischknecht said that as renewables became cheaper and more prevalent Australia needed to look to pumped hydro as part of a mix of storage and demand management solutions. Such solutions will be key in helping renewables integrate with the electricity grid in a stable, reliable way.

“The future really belongs to wind and solar but we know they are not really available all the time,” he said.

“We need to think about how to store that energy when it’s available and cheap. That’s where pumped hydro comes in.”

In its first stage of construction, the project will create 2000MW of new generation. Equipment, including turbines, will be located 1km underground, with 29 kilometres of tunnels linking two existing reservoirs in the Snowy Mountains region.

The Prime Minister said he was committed to “putting large scale energy storage on the agenda” saying the Snowy Mountain scheme had inspired generations of Australians and predicting Snowy 2.0 would have a similar impact.

“This is an example of economics and engineering informing energy planning,” he said.

Extensive drilling and analysis is already underway on the western side of the mountains around Tumut, 200km from Canberra.

It’s expected that the work funded to date, and the broader scheme if it goes ahead, will provide valuable insights for future pumped hydro projects.

ARENA has long had an interest in pumped hydro as a key part of the solution to Australia’s energy storage needs.

Check out this explainer which lays out how the technology works and some of the work we’re already undertaking in this area.

Snowy 2.0 is a pumped hydro project with the potential to provide storage for large scale, reliable renewable energy.

It would increase the generation capacity of the existing Snowy Scheme by up to 50 per cent, making up to 2000 megawatts available to the National Electricity Market.

It will also boast enough capacity to provide 350,000 MW/h of power over a week, enough to meet peak demand continuously for 500,000 homes.

This energy storage capacity could then be used to ease pressure at times of high demand and provide rapid-response back-up to fill unexpected gaps in electricity supply.

And that will be increasingly useful as Australia increases its use of renewable energy.

The site being considered for Snowy 2.0 involves linking the existing Tantangara and Talbingo reservoirs, which are separated by a height differential of 700m. Both are already part of Australia’s existing Snowy Mountains Scheme.

Snowy Hydro has said it does not envisage the project requiring the construction of any new dams or having an impact on irrigators and downstream water users.

What is pumped hydro?

Energy, produced from renewable sources such as wind or solar, is used to pump water from a lower reservoir into an upper reservoir at times of low demand.

When demand is higher, water is released back into the lower reservoir, running downhill through turbines to generate electricity.

This addresses one of the key limitations of renewable energy, the fact that it is variable and depends upon weather and other natural conditions.

What is being announced?

ARENA has reached in principle agreement with Snowy Hydro to commit the $8 million, with an expectation that formal documents will be signed in the near future.

In March, ARENA announced $500,000 for a study into Snowy 2.0 but the scope of the work changed as the complexity of the project unfolded and timelines shifted. The result is the “accelerated” feasibility study announced at a total cost of $29 million.

With ARENA funding $8 million towards the study, the remainder of the cost – $21 million – will be picked up by Snowy Hydro.

What does ARENA get?

For ARENA the benefits of the project will be measured not just in megawatts but in creating future opportunities around pumped hydro that flow from the work done on Snowy 2.0.

The agency will receive a Public Market Report from Snowy Hydro at the conclusion of the study. Under the agreement with ARENA, Snowy will provide information on future trends for pumped hydro and energy demand, as well as the latest information on technology such as reversible pumps and variable load generation.

ARENA is proud to be playing a key role as facilitator in the emergence of various forms of renewable energy and energy storage. Pumped hydro is one such form.

The information obtained from the feasibility study will allow ARENA to continue and increase that leadership role, helping to answer questions about how pumped hydro might integrate with future energy markets as we move towards a renewable energy future.

The feasibility study should be delivered by late in the year. It will lay out both the technical and commercial feasibility of the project and be presented to the board of Snowy Hydro.

At the conclusion of the feasibility study the Snowy Hydro Board will make a final investment decision regarding the project, which is slated to cost more than $2 billion.

ARENA has thrown its weight behind a ... Read more
Hydropower / Pumped Hydro Energy Storage
There are 22,000 possible sites for pumped hydro storage in Australia image