Australia is the sunniest country on the planet. 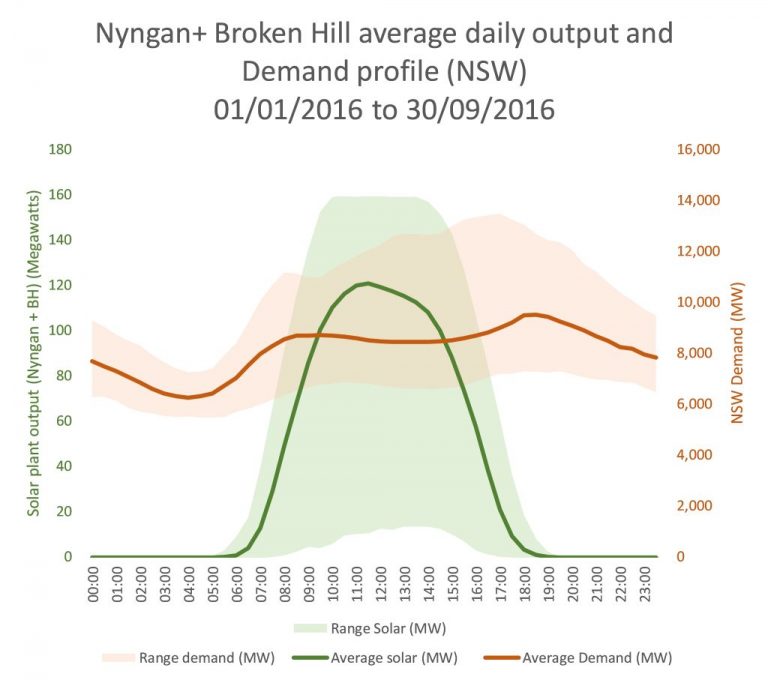 ARENA’s recent large-scale solar competitive round has helped to drive down costs of capturing this abundant resource on a large scale, but existing solar projects – namely the two plants developed by AGL at Nyngan and Broken Hill – are feeding into the growth of the industry with the release of fascinating data sets that provide real insights into the unique conditions experienced by big solar in the Australian landscape.

Below, a glance into what this data means for new big solar plants in Australia:

The chart above shows total generation at the Nyngan and Broken Hill plants. Unsurprisingly, seasonality plays a big part in the output of the two solar farms. Generation in the warmer months peak at around 35 gigawatt hours – enough to power around 65,000 households over that month.

In the midst of winter, total generation is 17 gigawatt hours – still a substantial amount. Expected periods of low output can inform developers and operators of when to schedule maintenance, cleaning and necessary downtime.

The data also reveals that solar output can vary greatly throughout the day. The charts below show the maximum and minimum output , alongside the average for the time period:

Though the average is closer to the top of the range, suggesting the solar farms generate more often at the higher levels of their capacities, the lows and highs of solar output raise the importance of forecasting output, as clouds can have a big impact on this. And, even on cloudy days, the farms still generate electricity.

It’s also worth noting that ARENA is building capacity in the industry to deal with this variability by supporting research into solar forecasting).

The future of large-scale solar

A range of new technologies will impact the deployment and investment potential of large-scale solar in Australia – specifically, technologies that can shift the daily profile of solar output closer to the way we consume electricity.

Though our current system can safely and securely handle large penetrations of technologies like wind and solar, matching the two curves above more closely is increasingly valuable for the integration of clean energy in Australia (AGL Energy’s ‘virtual battery’ storage project, with funding from ARENA, is particularly exciting – a virtual system of 1,000 networked batteries that can store seven megawatt hours of energy).

Though we rightly boast of access to a rich solar resource, there are characteristics of our landscape, such as seasonal variation, the way households and businesses consume electricity and variations in weather, that play into how solar developers build big new solar farms.

ARENA’s knowledge sharing mandate, along with our efforts to decrease the costs of this new form of generation, are helping smooth the path for future large-scale solar construction in the sunniest place on Earth.

What are renewable energy zones, and why do they matter? image

It is true that the sun doesn’t alw... Read more
Solar energy
Knowledge at the frontier: DeGrussa copper mine image

Knowledge at the frontier: DeGrussa copper mine

Solar gardens, that allow you to own ... Read more
Solar energy
View all related stories
Follow Us
Back to top