Lancaster in Southern California has an impressive claim to fame. 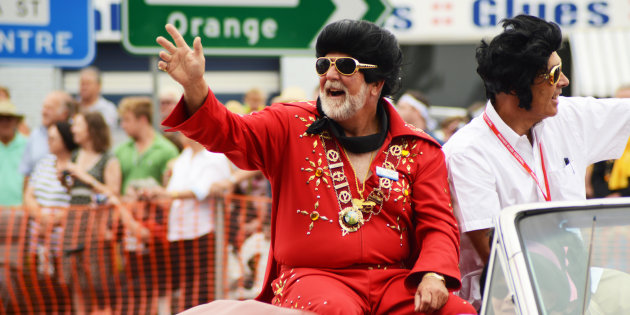 Ken Keith waving to the crowd.

Located just one hour’s drive north of Los Angeles, the city has become the first in the world to reach net zero emissions, now producing more energy than it consumes.

The ambitious target was set back in 2014 by the local council, who saw an opportunity to take advantage of their 280 sunny days each year.

Installing panels on seemingly any flat surface which didn’t move, almost every municipal building now has solar, as well as all 25 schools and even the local minor-league baseball diamond. Any electricity bought by the town comes from solar farms that have been built locally.

Transitioning a town home to 170,000 people onto renewables was no mean feat.

Established by the Climate Council, the City Power Partnership helps Australian towns and cities make the change to clean energy.

The gathering of representatives from councils around the country was designed to inspire the type of renewable energy ambition like that seen in the City of Lancaster.

Kiama Mayor Mark Honey said his council decided to support the Cities Power Partnership “in the spirit of taking coordinated and positive actions to leave the planet in a better place for our children and grandchildren.”

Famous for its annual Elvis festival, Parkes is fast building a reputation as a solar champion.

One of 12 projects funded through ARENA’s large-scale solar funding round, construction of the the 55 MW Parkes Solar Farm was completed in early 2018. Home to 206,000 solar panels, the farm produces enough electricity to power 21,000 homes.

Known as a passionate advocate of renewables – and part-time Elvis impersonator – Cr Keith said he was overwhelmed to receive the award.

“Parkes was one of the founding member councils of the CPP, and I am delighted to see that it is going from strength to strength,” Mayor Keith said.

“It has been incredible to see the kind of work that is being done by other councils around the country. To be recognised amongst such a competitive field certainly is humbling,” he said.

Estimated to employ more than 1000 people, the solar boom has helped the city to recover from the global financial crisis, which hit particularly hard locally. Employment rose as high as 17 per cent locally during 2009, but has now dropped below 6 per cent.

Chinese electric vehicle and battery manufacturer BYD have opened two local plants, one of which recently tripled in size to occupy a footprint of 450,000 square feet.

For communities around Australia grappling the the transition to renewable energy, Mayor Rex Parris and the City of Lancaster provide a strong lead to follow.

Other award winners at the City Power Partnership Summit included:

... Read more
Solar energy
Why sheep could be good for your solar farm image