Yack to the future! A town goes wild for renewables

It all started with a few neighbours in the town of Yackandandah gathering in front of a fire and some pizza. 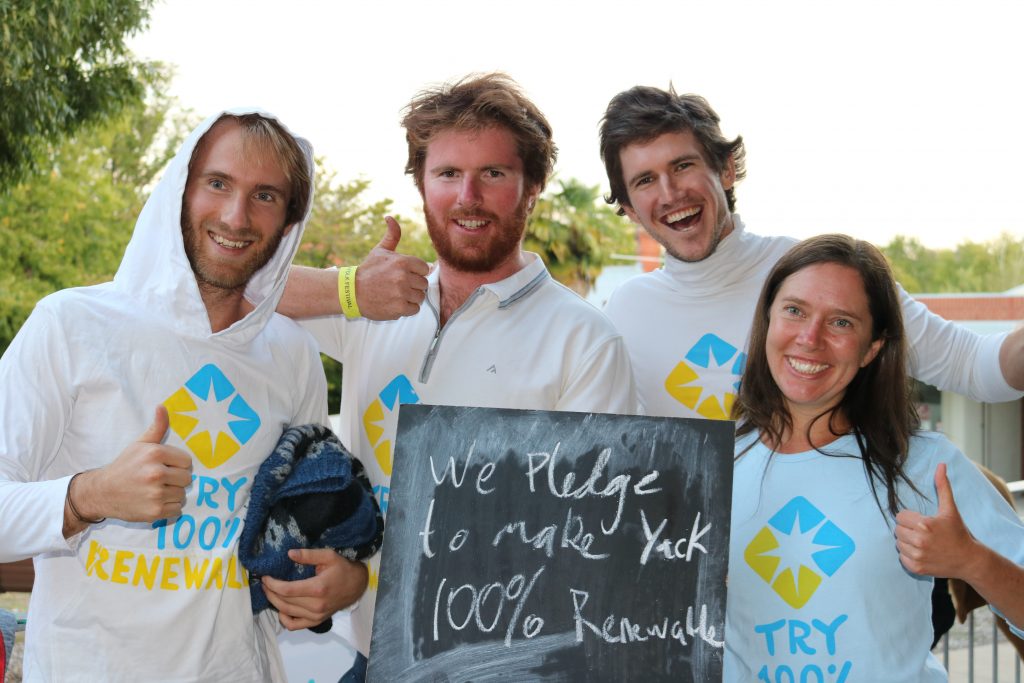 Inspired and excited, the group of about 10 residents had come together afterwards on a cold night in 2014 to toss around ideas about how the one-time gold rush town could increase its usage of renewable energy.

And as they began talking, an idea built. They decided to be ambitious and set a high target; by 2022 they would power their part of northeast Victoria using 100 per cent renewable energy.

And Totally Renewable Yackandandah – or TRY ­– was born.

Totally Renewable Yackandandah Executive Officer Matthew Charles-Jones, who was playing host that night, describes the decision as one driven by a feeling rather than a concrete plan.

“At the time that we set the target we had absolutely no idea on how to get it,” Mr Charles-Jones said.

“This was formed by heart rather than a dispassionate statement by the bureaucracy or by a government or an organisation.

“It was a heart decision rather than a planned process.”

What followed was months of informal conversations, followed by information sessions among friends and neighbours to spread the word.

Facebook, the local paper, stalls at the farmer’s market, information tables in front of the newsagent every Saturday, and interviews with community leaders were all used to make people familiar with the idea.

The plan was to have an “intense strategy” to push energy efficiency by creating a high density of households and businesses using rooftop solar and storage batteries and to do this by taking advantage of their collective power through bulk-buys.

Installing mass-scale solar hot water systems is also on the cards. Community halls have been offered an upgrade to more efficient LED lighting.  And an energy fund has been established to lend money to community projects to increase energy efficiency.

Mr Charles-Jones said by the end of November 2017, more than 40 per cent of households in the town will have a solar rooftop system (the national figure is around half that).

“We operate on the principle that we have about a 90 per cent-plus level support across Yackandandah,” he said.

“But we are also really cognisant and respectful that there are people who are not interested in what we are doing, and that there is no reason that would preclude us from achieving the 100 per cent.”

Mr Charles-Jones said the group plans to generate more electricity through renewable energy than needed to run the town.

Also in the pipeline is a mini-grid and a community energy retailer to allow the townsfolk to share and trade energy as well as a micro-computer, Mondo Ubi, to monitor people’s energy usage among other things. A small ‘solar grove’ with a gathering of solar panels would then be used to top up any remaining energy needs.

Cathy McGowan, the Independent member for Indi has been advocating for Yackandandah’s renewable energy project.

“Everybody has got a role to play [in meeting renewable energy targets],” she said.

“Yackandandah is an example of a really active, involved community. It is taking responsibility.”

She said there was a need to recognise that communities like Yackandandah were an important part of the grid and to say: ‘you might be small but you are very significant and we want to support you’.”

Donna and Nigel Jones moved into the town seven years ago with their three children Finbar, 12, Maeve, 9, Lenny, 5.

Ms Jones said what attracted them to the town was the thought of living in a “good community” where the “kids know most of the people they see down the street”.

So when TRY became a reality, the family decided to install a solar rooftop system and a battery.

But, Ms Jones said the decision was not financial as they already lived in a sustainable building.

“We actually made a conscious choice to build this house in such a way so that our energy consumption would be quite low,” she said.

“It’s just that sense of community and knowing we are contributing to something bigger rather than just being the only people in the whole town community with solar panels on our roof. That we are helping to drive towards a community goal – it is the power of numbers.”

Two NSW schools are in a class of the... Read more
Renewables in buildings
Brimbank Aquatic and Wellness Centre heat pumps make a splash image

We love a sunburnt rooftop. A land of... Read more
Renewables in buildings
Brimbank council makes a splash with renewable aquatic centre image

Heat pumps powered by solar will be u... Read more
Renewables in buildings
View all related stories
Follow Us
Back to top