Ready to repower your commute with renewable energy, but can’t afford an EV? 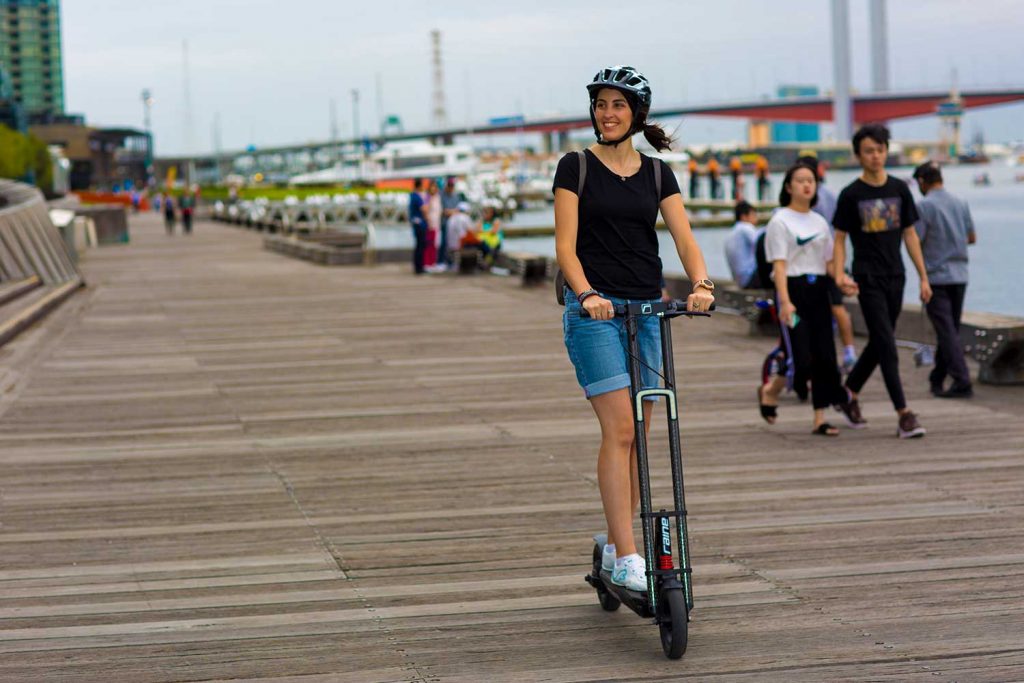 Woman riding on a Raine electric scooter at Docklands Pier.

The Raine electric scooter is a high performance scooter designed by a Melbourne startup to help transform the urban commute.

The Raine One is the first release from Fitzroy-based Raine Scooters, a startup founded in 2019 to shake up the electrified personal transport market.

The Raine electric scooter has been developed by seasoned entrepreneurs with a passion for electric skateboards, designed from the ground up to meet the needs of an urban commuter.

It offers a competitive spec list for the AUD $1650 pre-order price, with a 750 watt electric motor that can push the Raine electric scooter to a top speed of 50kph (with the option of capping output to meet the legal requirements in certain states and countries). Exact battery specifications for production models are to be confirmed, but a 500-600Wh lithium ion pack will deliver a range of 40kms from a five hour charge.

The initial run for Kickstarter investors are being manufactured now, with slight delays due to the coronavirus holding delivery back from May until June. Raine is now taking pre-orders for sales to the general public, with shipping on track to begin in July.

Their new e-scooter is launching in an increasingly competitive market. An e-bike currently leads US crowdfunding site Indiegogo’s 2020 campaigns, with nearly $9 million pledged and by 4,327 backers and 9 days still to run.

To try to cut through the hype and find out whether the fledgling electric rideable market is likely to play a meaningful role in electrifying the way we move around, ARENAWIRE spoke to Raine founder Michelle Mannering.

Why launch an electric scooter startup?

Alongside her two fellow founders, Mannering explained they were looking ahead and searching for the next big thing. Watching global trends, through the lens of their passion for electric skateboards, they noticed a dramatic growth in the use of electric scooters.

“We saw them around, but it was hard to get one and you couldn’t get them from official retailers,” she said.

“You had to find a seller online which comes with a lot of problems in terms of parts if they get broken. Also, a lot of the scooters that were being sold have a mix of random bits and pieces without any design elements behind them.”

The Raine founders noticed that more people were using electric scooters to commute, but saw room for improvement with the way they were designed and constructed. She says the team started with a blank slate, asking themselves, “What would be the ideal scooter to commute on, what do people want?”

They also explored the frustrations that people had with their current commute, regardless of whether they drove a car, caught public transport or rode a bicycle or scooter.

“One of the things we noticed is that transport congestion is a massive problem, and electric rideables are becoming popular because they allow you to get to places more quickly.”

They saw an opportunity tap into frustration with parking, public transport and congestion, with a product that people could get excited about.

Acknowledging that some of her community will disagree, Michelle said they quickly ruled out developing a new skateboard.

“Skateboards are a lot of fun, but they are quite dangerous. It’s hard to maneuver on a skateboard, so it’s not the best device for commuting on.”

They also considered e-bikes, but struck the idea out because their larger size makes it difficult (and unpopular) to take them onto busy trains, and the market is already more established.

“We wanted something that was small, easy to ride and has a low barrier to entry to ride one. We thought we could build a really good scooter – they fold up, they’re portable, they’re easy to ride and if you build it right they can look cool.”

Mannering says while some of the growth in the market can be attributed to significant falls in the price of the technology that underpins electric bikes, scooters and skateboards, the biggest factor has been advances in battery capabilities.

“Batteries are not only cheaper, but they have far more power and are much smaller and lighter. If you are building an electric rideable, adding a giant heavy battery killed every reason why you wanted the device in the first place.”

She attributes the improvements to battery technology to research and development done by the electric vehicle industry.

Citing the way Tesla has transformed the electric vehicle market, she said, “the reason they are becoming better and better is because they go further and they go for longer, which is what’s needed when looking at electric technology.

Like an electric vehicle, the scooter’s lithium ion battery pack can be charged with green energy from the grid or a rooftop solar system for renewable transport. According to Mannering’s calculations, it costs her about 12 cents to charge her prototype model from grid power.

Legality varies according to jurisdiction, with Queensland the only Australian state to allow e-scooters above 200W to be operated at speeds up to 25kph.

Tasmania, Victoria, the ACT and Northern Territory allow electric scooters to be operated at low speeds in some public places, while in New South Wales, South Australia and Western Australia they can currently only be used on private property.

Australia’s road laws relating to personal mobility devices are currently being investigated by the National Transport Commission. According to research undertaken by the RACV, 80 per cent of 1400 people surveyed would ride an e-scooter.

This popularity has been evident in a Brisbane rideshare scheme launched in 2019 by US provider Lime scooters, but the company’s planned expansion into other states has stalled. Adelaide trials of Lime and Beam e-scooter rideshare programs have been unsuccessful, with two new providers offered permits in early 2020.

While Mannering says she is keen for laws to be reformed to get more e-scooters onto Australian roads, she and the Raine co-founders see plenty of opportunities on the global market.

“We think it is only a matter of time.”

Not many of us associate garbage and ... Read more
Electric vehicles
Australian smart charging trial prepares for EV growth image

Could electrifying the cars and truck... Read more
Electric vehicles
View all related stories
Follow Us
Back to top