Australia’s potential to become a renewable energy exporter is taking a big step forward via its largest renewable hydrogen plant so far, to be built in the Pilbara. 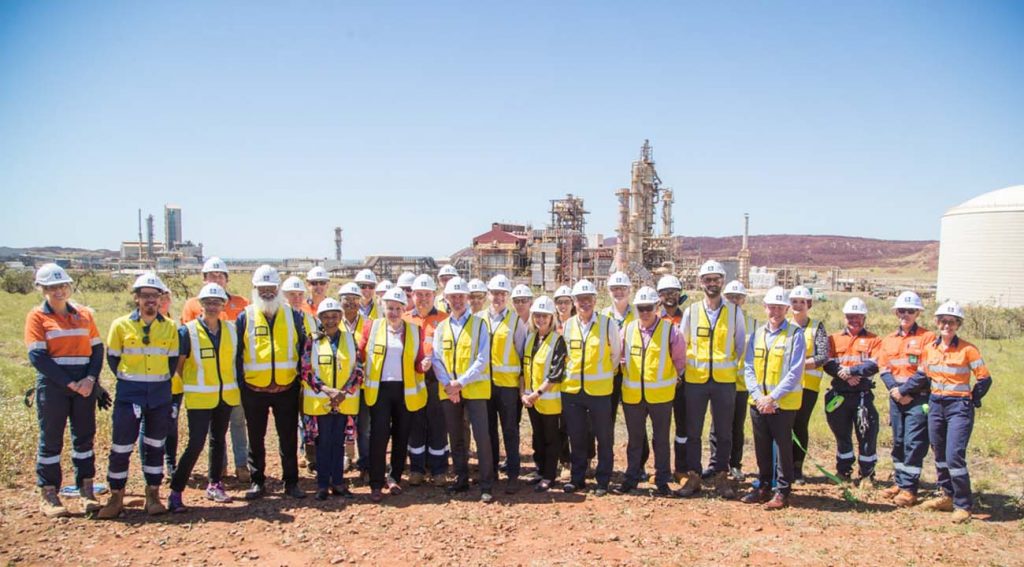 “The Yuri project is exciting because fertiliser production is a significant existing end use for hydrogen and one where we can make an immediate difference.” ARENA CEO Darren Miller

Plans for one of the world’s largest renewable hydrogen plants are one step closer to reality.

ARENA has conditionally approved a grant of $47.5 million in funding to build a 10 MW electrolyser and 18 MW of solar PV in Karratha, WA.

The $87 million Yuri project led by global energy company ENGIE will use renewable electricity to produce hydrogen and supply it to the adjacent Yara Pilbara Fertiliser facility.

Hydrogen is used to produce ammonia, which in turn is a vital ingredient in all nitrogen fertilisers. Currently, ammonia production uses hydrogen derived from fossil fuels.

This first-of-its-kind project will produce green hydrogen via electrolysis from renewable energy.

The project is expected to start construction in October 2022 and be completed by early 2024.

Once completed, Yuri will be Australia’s largest electrolyser, capable of producing up to 640 tonnes of renewable hydrogen each year.

Today, around 98 per cent of the world’s industrial hydrogen production relies on fossil fuels.

To put that into perspective, that’s equivalent to the emissions of the aviation industry. If ammonia were a country, it would be the world’s 16th largest emitter, right between South Africa and Australia.

The most common, and cheapest method of producing hydrogen is via a process called steam methane reforming. Natural gas (methane) reacts with high pressure steam to produce hydrogen plus, at the end of the process, CO2.

Renewable hydrogen is created through a process called electrolysis, which splits water into its molecular elements, hydrogen and oxygen.

While electrolysis is an energy intensive process, when powered by renewable energy it creates emission-free hydrogen. In the case of the Yuri project in sunny Western Australia, that renewable energy will come from solar panels. Lots of them.

The renewable hydrogen will pipe directly into the neighbouring Yara fertiliser plant. Yara is currently largest producer of ammonia, capable of supplying around five per cent of global traded volumes.

Renowned economist and author of Superpower: Australia’s low-carbon opportunity Professor Ross Garnaut recently told ARENA’s Rewired podcast that not only will renewable hydrogen play a “very large role in many areas of decarbonisation,” but the opportunities for Australia could be game changing.

“The big industrial countries of the Northern Hemisphere China, Japan, Korea, Germany, are beginning to realise that hydrogen will be the root of decarbonisation,” Professor Garnaut said.

“It’s going to be very difficult for them to produce enough hydrogen at low cost to do it themselves. And so, importing hydrogen or importing processed zero-emission materials is going to be the way that they decarbonise their industries,” he said.

ARENA CEO Darren Miller described the Yuri project as an important step in Australia’s journey to become a major exporter of renewable hydrogen.

“Whether it’s for decarbonising fertiliser production, or for use as a zero emissions fuel, renewable hydrogen will be vital to reducing emissions in so called hard-to-abate sectors,” he said.

“It is also a huge export opportunity for Australia to provide clean energy and emissions free materials.”

Speaking from the Yara site, Mr Miller said: “I hope and expect that in the years ahead we’ll be building many gigawatts of hydrogen electrolysers all around the country. If this comes to pass then I believe we will look back at days like today and realise just how significant this project is.

Yuri is the first project to reach the construction stage as part of ARENA’s competitive funding round to build Australia’s first renewable hydrogen plant.

“The Yuri project is exciting because fertiliser production is a significant existing end use for hydrogen and one where we can make an immediate difference because we are replacing fossil fuels with renewable energy to make hydrogen,” Mr Miller said.

“As the largest hydrogen project of its kind so far in Australia and one of the largest in the world, this project will help us understand the opportunities and challenges for producing renewable hydrogen at scale, offering valuable insights into the technical complexities, economics and supply chain considerations for future commercial scale hydrogen electrolyser projects in Australia.”

“This is going to be important if we are to achieve zero net emissions in the decades ahead.”

Hysata CEO Paul Barrett explains how ... Read more
Hydrogen energy
Can we use hydrogen as an energy source? image