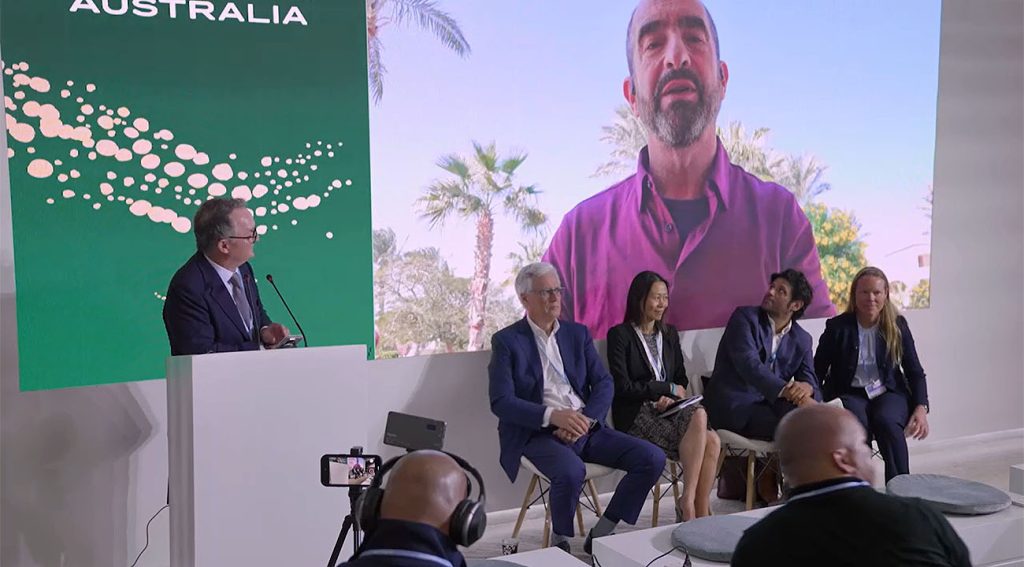 “I love a sunburnt country, a land of sweeping plains”
My Country, Dorothea Mackellar

If a line of poetry could capture the mood at the Australian Pavilion at COP27 in Sharm El-Sheikh, Egypt, you could do worse than Dorothea Mackellar’s classic poem My Country.

Australia, a land of plentiful sunshine, space and enormous potential.

It was a theme reprised by all contributors to an impressive panel hosted by ARENA, Australia’s Energy and Hydrogen Opportunity.

Mr Punch introduced the four panellists as representing organisations “thinking big” abut Australia’s renewable energy future.  The additional video guest was a welcome surprise after missing an earlier ARENA event due to getting caught up in the arrival at COP27 of US President Joe Biden and his entourage.

Here are excerpts from each of the guest speakers.

“Australia has a huge potential export opportunity in hydrogen-derived products.”

Well, if you fly over Australia in daylight you do in a sense become an expert in Australia’s renewable energy possibility.

And I remember when I first did that on flight from Singapore heading to Sydney. You fly over a lot of desert, and it’s very sunny

And the moment we get below [a hydrogen price of] $2 per kilogram, this is an immensely transformative role in the global economy. And it is an immense opportunity for Australia.

Suppose you produce 20 million tonnes of hydrogen, no reason why you shouldn’t. That’s US$40 billion of export revenue. I think that is pretty competitive with all the export revenue you are getting from coal at the moment

So, the crucial question is, do you export it as hydrogen or as something else?

Our analysis of the economics is that you will export it as hydrogen if you’re close enough to do a hydrogen pipeline.

But I think, frankly, Australia is too far away from the sources of demand for the pipeline route to work. And putting it into LNG ships is tricky in terms of the economics.

And turning it into ammonia and back into hydrogen at the other end just has lifecycle losses.

So, the crucial issue is going downstream in the revenue chain. Going downstream for instance into iron and steel. Steel is in future can be very significantly produced by hydrogen direct reduction.

It may be that the steel production of the future, actually still sits very close to the end users. But there is a major opportunity to turn iron ore and cheap energy into sponge iron.

If you ship iron ore, you’re shipping about 70% iron, but about 30% oxygen. And that’s adding to the weight and volume. So why not ship sponge iron?

That is the crucial issue.

So, I flew over Australia, I saw the resource and now, I think we’re going to see it developed on a massive scale to the huge benefit of the Australian economy and huge benefit to the world in dealing with climate change.

“[Australia is] in a very strong position to lead the green hydrogen transition.”

So, what does Australia have to offer towards green hydrogen progress?

Australia has great, abundant resources in solar and wind.

And we have AAA credit rating, we have a track record in in the clean energy development, project development and, also, great financial and human resources.

Certainly, this puts us in a very strong position to lead the green hydrogen transition.

And according to an ARENA report Australia is actually ranked the fifth most cost-competitive producer of hydrogen in the world, behind China, Chile, Morocco and Colombia.

The innovation opportunity around this for Australia to develop technology in hard-to-abate sectors and the hydrogen powered applications in transport and in home heating.

So, there are many aspects that we can innovate.

Taking that forward we [CWP Global] embarked on looking at where the best complementary wind and solar resources are located across the globe.

And with our presence in Australia, had a look at the Australian landscape and worked with our partner, Intercontinental Energy, to develop the Asian Renewable Energy Hub project

It will be 14 gigawatts potentially of electrolyser capacity.

But at the initial stage what we’re looking at is sending electrons, or green fuels, or green hydrogen from the project site down to what is the one of the biggest iron ore basins in the world, in the Pilbara.

That puts the Pilbara in the category of being the regional hub, where there is 50% more mitigation potential in sheer reduction of emissions than any other region in the country.

So there is a ready-made solution if this project gets developed as long as the miners band together, pool their demand and agree to transition from the current of more than 3 billion litres a year of diesel. It’s a very serious number.

Clearly, a first phase is going to look at decarbonising iron ore and also open the possibility of a green industrialisation hub in the Pilbara, which will put green ammonia on ships which have the potential to make sponge iron in a green way, and value add to exports.

A massive new opportunity for jobs, reskilling and regional development.

We want to show that heavy industry can decarbonise.

Firstly, we are decarbonising our operations.

We’ve announced a fully costed decarbonisation plan at a cost of U$6.2 billion to decarbonise our operations by 2030

That’s real zero emissions for scope one and two. Not net zero, real zero. That means no fossil fuels.

So, we’re developing the technology to convert those huge mining trucks that weigh 400 tonnes fully loaded to run on no diesel.

To convert our trains which are three kilometres long and carry 35,000 tonnes of iron ore to run on zero diesel.

And to convert all our mining equipment to zero diesel.

So, we will eliminate all diesel from our operations by 2030.

We’ve already had hydrogen running a truck, ammonia running a train, a truck running on battery electric, and we’re converting a ship to run on ammonia.

Right now, at our Christmas Creek operation in the Pilbara, we’re building a green hydrogen plant to take renewable energy from our solar plants to make green hydrogen through electrolysis.

We’re going to make both liquid and gaseous forms of hydrogen.

We’re going to learn a lot. And we’re going to apply those learnings into the next technology prototypes so that from 2025 onwards we will be replacing our fleet with zero emissions equipment.

So, we need to take action and Fortescue Future Industries, as some of the examples are showing, clearly is.

“We’re going to need is an enormous increase in the amount of mining extraction of the minerals and metals required for a clean energy transition.”

I think Australia’s role in decarbonisation goes far beyond sorting itself out. I think it’s also about two things: the export of its extraordinary clean energy resources, and also, minerals.

One of the things we’re going to need is an enormous increase in the amount of mining extraction of the minerals and metals required for a clean energy transition.

When it comes to the use of your [Australia’s] clean energy resources, extraordinary cheap solar, cheap wind, it means you can make cheap hydrogen, cheap ammonia.

That leads to another huge opportunity for Australia. If you have iron ore and you have cheap hydrogen, then really you ought to be manufacturing. You want to move up the value chain and manufacture, if not steel, then at least some sponge iron that can be exported to your partners.

That is a colossal opportunity.

And in fact, opportunities exist like that for Australia in other parts of the mineral extraction, refining and metals world.

It’s an incredibly exciting time, I think, for building those sorts of businesses in Australia.

Some of Australia’s most exciting c... Read more
Hydrogen energy
Interested in exporting hydrogen? Tell us what you think image

Interested in exporting hydrogen? Tell us what you think

Geelong will be home to a next genera... Read more
Hydrogen energy
How could renewable hydrogen power our lives? image

Hydrogen offers a way to produce a re... Read more
Hydrogen energy
View all related stories
Follow Us
Back to top