Four charts that show the future of battery storage

Turn your head to the horizon on your next road trip through rural Australia and there’s a good chance you’ll see a line of white, bladed towers perched atop a ridgeline, or black rows of photovoltaic glass sitting silently in a paddock. 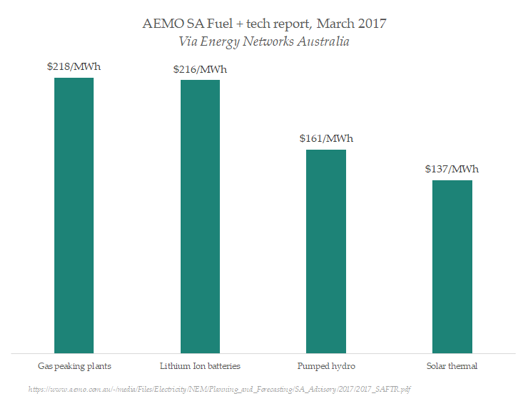 Wind and solar. These are technologies that have gone through the processes of development and then commercialisation. From promising but expensive prototypes they have transitioned to become mass-produced and readily-deployed systems.

And they are reaping rewards for the companies that operate them.

Now it’s time for batteries. The Australian Renewable Energy Agency is helping that same process of commercialisation take place for large-scale energy storage in Australia by providing funding for a big new South Australian battery. This project represents the leading edge of the commercialisation of storage globally, providing valuable information to an industry in which Australia is emerging as a world leader.

It’s an exciting development. So let us explain it to you using four charts (and one infographic).

One of the first lithium batteries, which used titanium sulfide, stank of rotten eggs. Titanium disulfide reacts with air to form hydrogen sulfide, which means this energy storage technology emitted a truly significant funk. It was also prohibitively expensive, and so, its development was discontinued.

But in the past two decades, lithium batteries – specifically, lithium-ion batteries that feature in portable electronics – have fallen rapidly in cost, dropping from ~3,000 $USD/KWh to ~$400USD/KWh in 2015. Through mass production and innovation, these small batteries have become commercially viable.

Small-scale lithium-ion batteries are a brilliant illustration of the mechanics of commercialisation. As mass production has ramped up, prices have dropped.

That process is now taking place with larger scale batteries too. Energy Networks Australia quotes the Australian Energy Market Operator, which finds large-scale lithium ion batteries are increasingly competitive (albeit at the higher end) with other energy balancing and storage technologies:

Tesla’s Elon Musk has predicted that lithium-ion battery costs will plummet to US$100/KWh by the end of the decade. Though such batteries are already becoming increasingly competitive with other forms of storage, commercialisation must be tested with real-world data and performance assessment. ARENA’s funding will be vital in efforts to poke and prod at the realities of mass deployment of grid-scale energy storage.

What is the ESCRI battery?

The project blends the prospects of commercialisation with renewable energy integration. The first phase of the ESCRI project involved the creation of a detailed report investigating whether a big battery makes commercial sense. That report argued: “it is envisaged that advancements in technology will result in a declining technology forward curve and improvements in economic viability in the future.”

As the above chart shows, the key time is now: 2017 is the point at which the net present value (NPV) tips into the positive upper half of the chart. It is the point where a real business case begins to emerge for the commercial operation of grid batteries.

While the ESCRI battery still requires ARENA funding of close to 40 per cent of its total cost, it is expected that proceeding with the project will speed up the path to commercial viability, a point at which future projects can proceed without financial support from government.

The Festival State is perfectly suited for testing the usefulness of large-scale lithium-ion energy storage technologies.

The ESCRI battery will be built at the Dalrymple Substation, and it’s going to be built and operated by the local transmission network service provider, Electranet, and leased to an energy retailer.

The battery will provide balancing services to the grid – rapid injections of supply and demand, and an ability to correct fluctuations in frequency through the ancillary services market.

Dalrymple is also right next to the Wattle Point Wind farm, allowing for close examination of the interaction between this big battery and a nearby renewable energy facility. These are important pieces of the grid security puzzle in SA’s rapidly changing system.

The commercialisation of large-scale energy storage has flow-on effects for new forms of renewable energy generation in South Australia.

This is in addition to its value for grid stabilisation, customer load shifting, ramp rate control and distribution services. The ESCRI battery has been compared to a Swiss Army Knife, it is designed to do a lot of things. And all of those things are needed in South Australia.

It really seems there’s no better place to poke and prod at the possibilities for the commercialisation of big batteries.

Australia’s role in the global shift to battery storage?

The ESCRI phase-1 report illustrates the recent history of global energy storage (via the US Department of Energy) – which began as ‘mechanical’ (big spinning fly-wheels), shifted to ‘thermal’ (e.g. SA’s recent solar thermal plant), and has, since 2012, begun shifting to ‘electro-chemical’ (lithium-ion). Cumulative capacity of electro-chemical storage around the world is set to hit 1.1 gigawatts in 2017 (up from 0.2 in 2010):

Alongside this growth, “Battery costs have declined 40 percent since 2014”, according to Bloomberg, (who also forecast a rapid rise in installations around the world). Mass production will shift the ‘learning curve’ for energy storage – Tesla’s gigafactory will be the first of many plants pumping out bigger batteries.

The leading edge of shifts in storage has been focused on South Australia. The recent announcement of a Tesla battery highlighted the scale of Australian investment, with the company claiming the new project was three times bigger than the current biggest battery system in the world.

ARENA’s new battery is the second biggest, further evidence of the world-leading role Australia is playing in the growth and commercialisation of battery storage.

Projects of this scale are vital in stress-testing whether energy storage can serve a commercial purpose in Australia’s grid (the third-biggest battery in the world will be situated in Los Angeles, and will produce 20 MW).

South Australia won’t necessarily hold these records for long. Like the small battery in the device that you’re probably reading this on, large-scale lithium-ion batteries are very likely to grow into ubiquity, as they provide grid stabilisation services and enable further integration of renewable energy.

If and when that happens, Australia and ARENA will have played a significant role in that process. Commercialisation is a vital component of rapid changes in technology, and ARENA’s involvement is helping to stress-test the leading edge of what will likely be a major addition to Australia’s energy system.

This article was originally written by Ketan Joshi, Energy, science and technology specialist.

Eight of the largest batteries ever b... Read more
Battery storage
View all related stories
Follow Us
Back to top