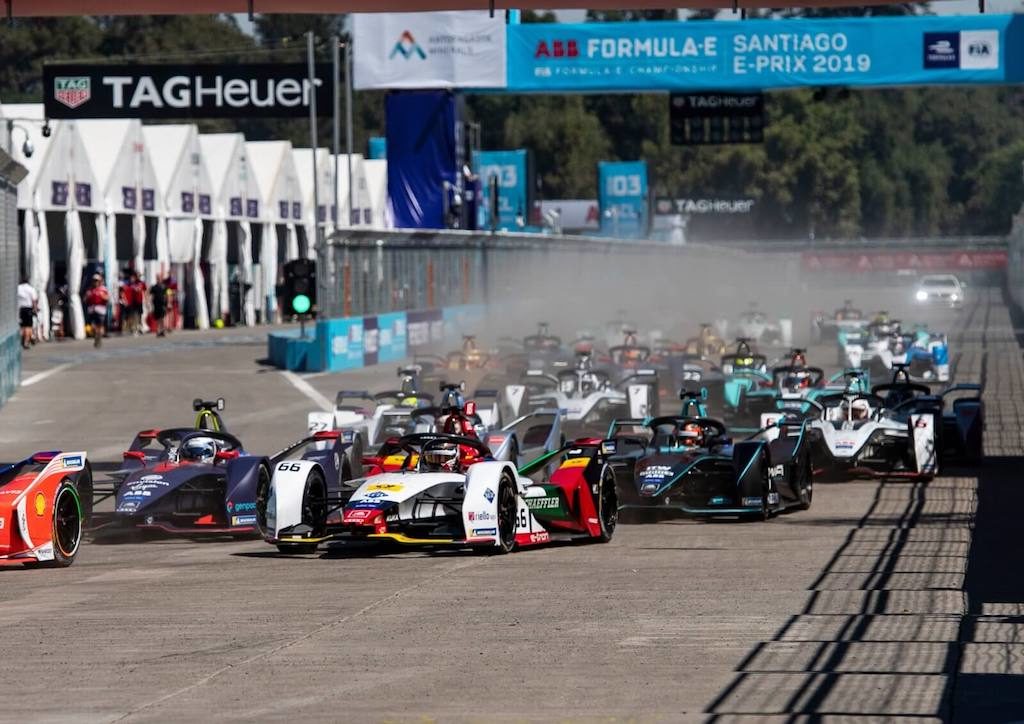 Electric open wheel racing category in the Formula E electric car racing is going from strength to strength, with just 17 points separating the top six positions in the drivers championship.

Just as technology developed for Formula 1 has trickled down to road cars, Formula E aims to accelerate the electrification of the automobile industry to reduce carbon emissions.

Now in its fifth season, the starting grid showcases some of the world’s biggest names in car manufacturing. BMW, Audi, Jaguar, Nissan and Mahindra line up alongside Venturi – a team co-founded by Hollywood star and prominent environmentalist Leonardo DiCaprio.

More marques are on the way, with German giants Mercedes-Benz and Porsche working to homologate cars in time for the 2019/2020 season.

Sanctioned by the Fédération Internationale de l’Automobile (FIA) who describe the series as a disruptor in the motorsport industry, the racing is designed to promote renewable energy and sustainability.

Lithium-ion batteries within each car are recharged by generators powered by a renewable glycerine fuel. Developed by British Aquafuel, the system can recharge a car battery in an hour with a capacity of 850 KW when all 20 cars are plugged in at the same time.

To improve sustainability, teams are limited to two sets of all-weather tyres per race weekend, compared to the 13 sets allowed in Formula 1. This not only minimises pollution from the production and disposal of tyres, but maximises the relevance of the series to road car technology.

The drivers standings show how competitive the racing has been. Prior to last weekend’s Monaco round, series leader Jean-Éric Vergne led his DS Techeetah team mate André Lotterer by just one point, followed by Robin Frijns from Envision Virgin Racing five points further back. A win in Monaco by Audi driver Lucas Di Grassi now has him up into second place overall, now six points behind series leader Vergne.

With 25 points available for each win and three rounds left in the 13 race season, the championship is wide open.

Held almost exclusively on street circuits, the championship visits some of the world’s most popular tourist cities – New York, London, Paris and Rome, as well as some destinations further afield like Marrakesh and Santiago. Picturesque Monaco, home to an annual Formula 1 Grand Prix since 1929, is already a fixture on the Formula E circuit.

The cars themselves are impressive. Second generation vehicles released for this season have 250 kW in their most powerful mode and weigh approximately 900 kilograms. They can sprint to 100 kilometres per hour in just 2.8 seconds and go on to a top speed of 280kph. If attack mode is activated, power is temporarily boosted by 25 kW.

A regenerative braking system captures about 20 per cent of energy expended. This technology is already being used in electric road vehicles, with Audi claims increases the range of their e-tron electric SUV by 30 per cent.

To celebrate Jean-Eric Vergne’s title winning campaign in the 2017/18 season, a new film produced by Leonardo DiCaprio is set to premiere at the Cannes Film Festival this year. “And We Go Green” doesn’t yet have a public release date, but there are reports that there discussions underway with distributors.

Alejandro Agag, one of the film’s producers, said that “The documentary encapsulates the true mission and purpose of the ABB FIA Formula E Championship, to show how competition drives technological development and how the excitement of sport can have a meaningful social impact and alter perceptions of electric vehicles.”

Could electrifying the cars and truck... Read more
Electric vehicles
View all related stories
Follow Us
Back to top