The coastal community of Alkimos Beach has trialled a new way of building homes with solar, battery storage and surprising results. 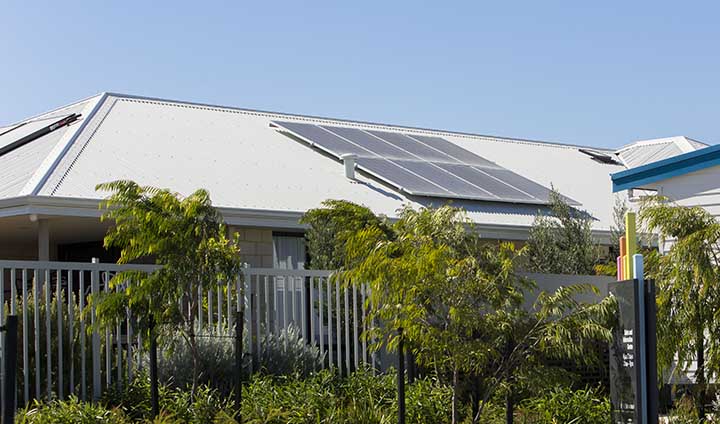 One hundred and thirteen households across the Alkimos Beach estate signed up to install solar panels on their roofs.

When you imagine a modern housing community, what do you picture?

Australia’s capital cities are surrounded by estates offering a glimpse of the great Australian dream: affordable options for a decent sized home and garden.

But for many, living in a large development introduces compromise. There are often trade offs, such as homes built to lower energy efficiency standards and bigger heating and cooling bills.

The group approached ARENA for support to deliver a sustainable community with solar panels and energy efficient devices and designs.

Construction at Alkimos Beach on Perth’s northern fringe was completed in 2020. The result was Australia’s first community with a 6-Star Green Star rating, the highest sustainability score possible. The project also created a valuable blueprint for other developers to follow.

Back in 2016, more than 100 households across the Alkimos Beach estate signed up for the five-year trial. They agreed to install solar panels on the roofs of their new homes, paired with energy efficient hot water systems. Additional rebates were offered for other investments in efficient devices.

A key part of the project saw the installation of a 1.1 MW community battery to soak up excess solar power during the day for later use on site.

Together, the measures had a meaningful impact. Participating households shared in $81,376 of power bill savings over the five-year trial.

The project also demonstrated opportunities for property developers to benefit from media exposure and marketing opportunities, access to valuable energy data, and better relationships with energy and government stakeholders.

The focus on environmental benefits proved to be popular.

In a 2019 survey of households participating in the scheme, 90 per cent of respondents said the most important reason for taking part was saving money on power bills.

But 80 per cent also rated the environment as an important factor.

An overwhelming 93 per cent of respondents expressed interest in new energy technologies. More than three quarters said they were interested in accessing battery storage.

Initially, individual households expressed a preference to own their own battery storage. But once purchase, installation and maintenance costs were explained, a majority said they preferred a community battery storage system.

Synergy initially disconnected the battery storage at the end of the trial but says it is now back in service.

The energy retailer is also reviewing the battery’s operation with a view to developing reactive power support to the network.

In a potential further benefit to the Alkimos Beach community, Synergy is investigating whether network tariffs can be modified to provide an even more cost-effective operation.

Thousands of Housing SA premises will... Read more
Distributed energy resources
View all related stories
Follow Us
Back to top