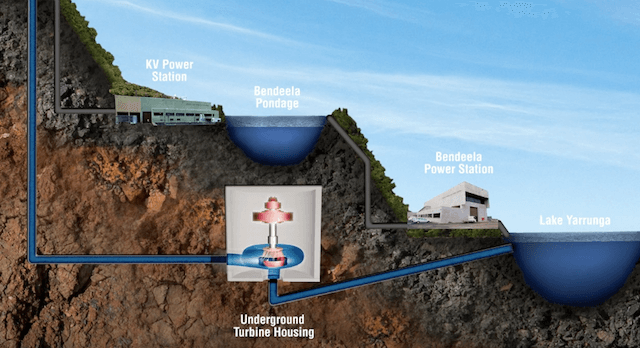 One of Australia’s few examples of pumped hydro projects in operation, the scheme has delivered clean, green electricity since it was commissioned in 1977. Today it plays a key role in managing water security for the people of New South Wales.

As well as moving drinking water across a nearby range, the scheme acts like a giant battery. It can pump water up to the elevated reservoirs when energy demand and prices are low, to be later released to create electricity when demand rises.

Unlike a traditional hydroelectric plant, the scheme can move water between the upper and lower reservoirs on-demand, and reuse water over and over again.

Cascading water through Kangaroo Valley and Bendeela hydroelectric plants, the Shoalhaven scheme today has a capacity of 240MW.

That could be set to grow, with ARENA today announcing $2 million in funding for Origin to assess the feasibility of increasing capacity to 475MW.

That would provide enough energy to power an additional 80,000 homes.

The ARENA funded study will build on pre-feasibility investigations undertaken earlier this year by Origin, which assessed three options to expand the scheme.

The full feasibility study will be based on their preferred option, which bypasses the Kangaroo Valley Power Station and pumps water from Lake Yarrunga to Fitzroy Falls Reservoir.

The project is aided by work to future proof the Shoalhaven scheme when it was originally constructed – meaning dams, pipeline easements and transmission connections are already in place.

Whether delivered by big batteries, solar, hydrogen or other technologies, there is no question that energy storage will be an integral part of the future energy network.

Compared with other options on the table, pumped hydro makes a strong case. Limited only by the volume of the upper reservoir, pumped hydro can supply more energy for longer than the other available technologies.

“Expanding this scheme would provide more electricity over a shorter period. This would allow Origin to deliver capacity when it needed – when demand is high or renewable output is low,” Mr Miller said.

With solar and wind impacted by cloud cover, low winds, and the daily disruption of nighttime, this supply will be vital to bolster renewables as they do more of the heavy lifting.

“The findings from the Shoalhaven study will help to plan the other hydro energy projects in the pipeline. There is so much potential in this technology, which can be seen in the work underway on Snowy 2.0, Hydro Tasmania’s Battery of the Nation initiatives, Kidston in Queensland, EnergyAustralia’s seawater pumped hydro project in Cultana and the Iron Duchess in South Australia,” he said.

“We know that storage, from both pumped hydro and batteries, will be key to transitioning to renewable energy in Australia,” Mr Miller said.

While the electricity system can cope with a lot more variable renewable energy in the system before storage is needed in significant quantities, pumped hydro is shaping up as an important storage technology – particularly for longer durations.

“Shoalhaven is in the unique position of having much of the required infrastructure needed for expansion already in place,” Greg Jarvis said.

“This means it can be developed with less community and environmental impacts and in a shorter timeframe compared to developing the same amount of additional capacity as a greenfields project,” he said.

Unlike other storage projects being considered, Shoalhaven has been supplying electricity to the grid for more than 40 years, so it’s potential is well understood.

“This is a strong prospect for future expansion, because Shoalhaven can feed electricity into the grid in as little as three minutes, therefore improving reliability and complementing growing intermittent renewables in the system.

“We will now get on with important assessments and the necessary regulatory approvals that may allow us to double Shoalhaven’s generating capacity in the future,” Mr Jarvis said.

One of Australia’s oldest and most ... Read more
Hydropower / Pumped Hydro Energy Storage
Kidston gold mine lives on as pumped hydro plant image

One of the world’s largest compress... Read more
Hydropower / Pumped Hydro Energy Storage
View all related stories
Follow Us
Back to top