The researcher trains his blowtorch on a small panel, little bigger than a credit card. After repeated torching he reaches out his hand. It is cool to the touch. 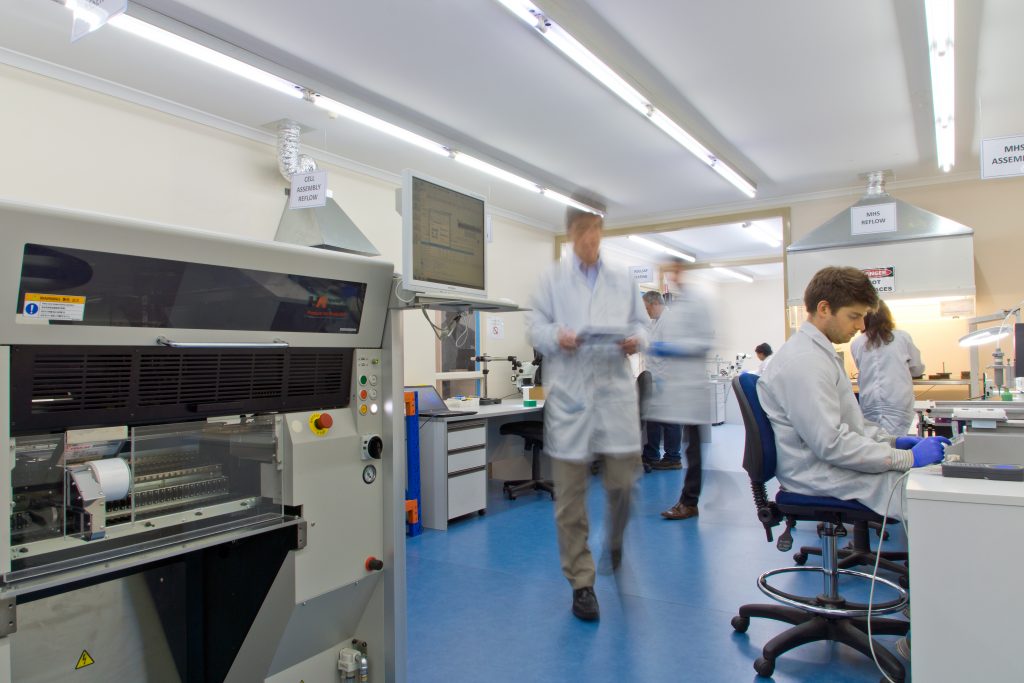 It’s an impressive sight that cuts to the heart of the world-leading technology being created here in a Melbourne high tech manufacturing facility, and it’s a breakthrough technology that ARENA is proud to contribute additional funding for.

ARENA is announcing a $4.8 million funding boost for the company behind this technology, RayGen, which will use the money to expand its pilot project. The money is part of $9.6 million equity raising effort from the company.

What is PV ultra?

These small “ultracool” modules are part of the receivers, destined for RayGen’s concentrated solar field at Newbridge in regional Victoria.

There, the world-leading technology created by RayGen captures the power of the sun from a field of automatically controlled mirrors (called heliostats), and amplifies this energy 650 times.

The concentrated light is then directed towards a central tower where a custom designed photovoltaic receiver converts the energy into electricity.

By converting the energy of the sun with such high efficiency, RayGen’s technology offers serious potential to reduce capital costs in both manufacturing and deployment of solar energy.

In 2016 RayGen, with ARENA’s funding support, completed the 200kW pilot project at Newbridge, just outside Bendigo. The project provided energy for a nearby mushroom farm, and also allowed RayGen to collect performance data and prove the efficiency of the system and understand how the technology can be manufactured and deployed at scale.

ARENA’s additional funding will now help expand the completed pilot project to a demonstration phase and will supply not only electricity but process heat to the site. It pushes RayGen one step closer to commercially deploying the technology and has the potential to create many more local high tech manufacturing jobs as the business scales up over the next decade.

ARENA CEO Ivor Frischknecht said the demonstration was an important step for the technology in Australia.

“This is an exciting opportunity for ARENA to invest in RayGen, an Australian-based solar technology business, that is really leading the world in concentrated solar PV and making great progress in making it commercially viable, Mr Frischknecht said.

When John Lasich founded RayGen in 2010 the company consisted of three people and one big idea.

As a researcher at Victoria University, he completed his PhD on the subject of concentrated solar systems. Years later, RayGen gave him the opportunity to put his ideas into practice.

Since then, the company has grown to employ 27 people. These are high-tech jobs creating a high-tech product that could soon be exported to the world.

“We’re a small startup with a lot of experience in energy and solar energy,” he says.

“What we did was take our experience and create a new technology that has all the key elements we need to allow us to manufacture here in Australia.”

It’s small, for one. The receiver’s size means it can be affordably produced and can be exported in large numbers without prohibitive cost.

“This is a very small, very powerful module,” he says. “That’s our secret sauce.”

Just 4m2 of PV Ultra can produce as much energy as 5000m2 of conventional, silicon-based solar panels (though 2500m2 of heliostats are required to direct light onto it).

The high-tech part of the system – the receiver – will be made in Australia and exported to the world. That means in future, the more easily-produced parts of the system (such as the heliostats) can be produced in-country by partners in each export market.

The technology combines various elements of solar PV, concentrated solar thermal and CPV to deliver a low-cost energy solution and addresses issues like high capital costs and inefficiencies in capturing light that have traditionally been barriers to deploying standard CPV technology.

RayGen’s unique module is a box small enough to fit in the palm of your hand. It employs technology typically used in satellite applications in space to convert concentrated light directly into electricity.

The RayGen heliostat mirrors move to track the sun, delivering a concentrated light beam to the array of PV Ultra modules in the receiver. The receiver is linked to the mirrors by automated wireless software ensuring maximum output throughout the day as the mirrors follow the sun.

ARENA’s analysis of the project indicates that the technology has the potential to achieve a cost of less than $100/MWh once deployments reach a cumulative scale of 100MW.

To put that in context, industry sources estimate the cost of wind generation at $60-80 per MWh with solar PV now also within this cost range. Each of these technologies has an installed base of more than 100 GW.

Following the next project at Newbridge, RayGen is also preparing for a larger 11MW project in China, with RayGen’s Chinese partner and shareholder, Zhou Zhou Intense Solar managing construction with RayGen providing the receiver, control system and project design.

Over the past decade or so, improveme... Read more
Solar energy
Miners rush to renewables: an industry turning point. image