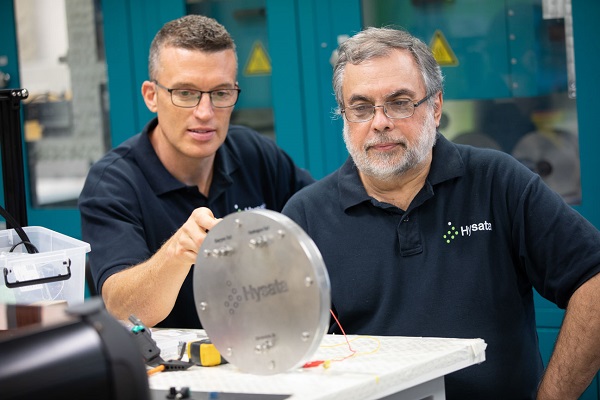 The news made a splash, offering a pathway for emissions free hydrogen to compete with methods of production that rely on fossil fuels.

“Hysata has developed a new category of electrolyser that really transforms the economics of green hydrogen production.”

Underpinning the breakthrough is a highly efficient design that eliminates almost all of the electrical resistance, excess heat and cooling that has held other electrolysers back.

The system has been informed by researchers at the University of Wollongong and Monash University, who received support from ARENA.

“Electrolysers have been around for over 100 years. It’s a pretty simple kind of high school level electrochemistry experiment, you have water and two electrodes, you run some potential across it, and you can split water pretty easily into hydrogen and oxygen.”

Australia’s hydrogen opportunity is significant. As the global energy transition sees lower demand for Australian coal and gas, hydrogen offers a way to convert our wind and solar power into an exportable product.

A green hydrogen industry could also contribute to a revival in Australian manufacturing, opening an emissions free pathway to produce steel, fertilisers and other products that today fossil fuels.

“So if we look towards 2050 and net zero, we’ve got to electrify everything we can right. So there’s no argument around electric electrification and deploying massive amounts of renewables and storage, but for hard-to-abate industries, electrification doesn’t do it.”

While the technology underpinning electrolysis isn’t new, it has been unable to compete on cost with alternative methods of hydrogen production that rely on coal and gas. To improve the equation, ARENA has committed more than $100 million to three, large-scale electrolyser deployments, and to projects demonstrating hydrogen use in passenger vehicles, heavy transport and low emission metal production.

These projects aim to prove the potential of hydrogen at all points of the supply chain, from production, compression, storage, transportation and end use.

Ongoing reductions in the price of wind and solar power will help to bring down the cost of renewable hydrogen, but Barrett is confident that the efficiency gains from their electrolyser design will deliver significant cost reductions.

Announcing the breakthrough earlier in the year, he said their cell design boosts efficiency from approximately 75 per cent to more than 95 per cent. Together with falling energy input costs and lower capital costs for hardware, we could be close to achieving the $2 per kilogram target.

The electrolysers are already working at scale at Hysata’s facility, with commercial deployments expected to be operational by 2025.

“Abundant solar and wind resources are in many cases developed and could be packaged up with electrolysers to make hydrogen for energy exports.”

“The efficiency of Hysata’s electrolyser is markedly higher than current market technologies, which enables hydrogen to be produced more efficiently and therefore puts hydrogen commerciality within reach,” McIntosh said.

McIntosh explained the costs of electricity still accounts for a large proportion of hydrogen production costs, so more work will be needed to bring down the cost of energy generation to unlock the vision for a renewable hydrogen industry.

“Hysata’s technology certainly is game changing and helps to commercialise hydrogen, but there is work ahead to achieve cost reductions across the entire hydrogen supply chain and to unlock hydrogen’s full potential,” she said.

How to convert electricity to hydrogen image