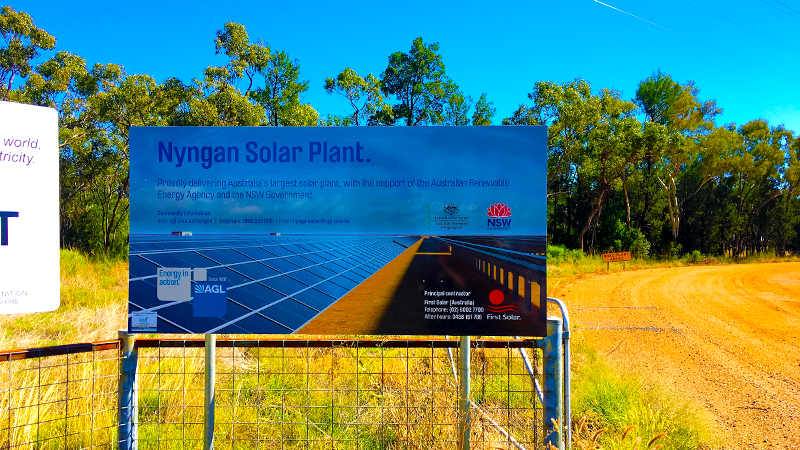 Brendan’s a Nyngan local, he was raised in this sunny town. And he has been part of the big changes when, in 2013, AGL built one of the biggest solar farms in the Southern Hemisphere.

Brendan is noticing that people are noticing the farm, “There’s a lot of interest in it, lot of people, and when the get out here they go, ‘jeez! It’s a lot bigger than what I expected’. It surprises a lot of people.”

Nyngan Solar Farm could be considered the birth-place of Australia’s large scale solar industry. The development of this farm helped establish the supply chains and technical know-how helping the construction of new solar farms across the country.

Stand on Nyngan’s red cracked earth and stand under its big, blue sky. Climb onto the farm’s viewing platform and listen to the hum of electricity. But don’t stay still for too long, you need to be a moving target for those flies.

Listen to our previous episodes to go on a journey around some of Australia’s best large-scale solar farms. Subscribe to the podcast on your favourite podcast app and leave a review.

But before you do any of that, come on our Nyngan adventure now…

There’s a key rule in the lab a... Read more
Solar energy
View all related stories
Follow Us
Back to top