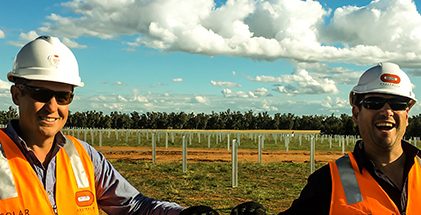 A lion, 250,000 tourists and a large-scale solar farm entered a small country town and created a thriving metropolis.

This is Dubbo, a city with the heart of a country town. It’s located in North Western NSW. It’s home to the Taronga Western Plains Zoo, an agricultural industry, and all the services that required to support 200,000 people in surrounding communities as well as the influx of tourists who come here every year.

And Dubbo’s large-scale solar farm also makes it one of Australia’s solar superpowers.

People have long been happy about the solar farms coming to Dubbo and nearby Narromine. Just ask David Hood, a tow trucker driver who has lived in the area his whole life. He’s so local that he built a house next door to the house where he grew up. He also lives next door to the Dubbo solar farm. So does his sister. “She’s happy to have it there instead of a hundred houses,” he says.

Justin Shepherd, Project manager at Bouygues Construction, is also getting lots of great feedback at community meetings. “They were all very interested in how it all worked,” he says.“And there was a real positive attitude of people in the crowd wanting to have this in place.”

Local farmers recognise that the solar industry co-exists so well with agriculture that it can provide a stable income in times of drought. How popular is solar in Dubbo? The highest uptake of solar on people’s homes in NSW is currently Dubbo, Liverpool and Lismore.

But what about that zoo? Back in the early 70s, Dubbo wasn’t the first site choice, that was the nearby town of Wellington. But as Mathew Dickerson, former Dubbo City Council Mayor, explains the Wellington farmers, ‘didn’t want wild lions and tigers roaming round taking all their important livestock’. So the zoo brought its exotic animals, employment and tourism to Dubbo instead.

Now the future’s bright in Dubbo. Locals can sit back and enjoy the abundance of tourists the zoo brings in and also take pride in the energy coming out of their local solar industry.

It takes a lot of water for Australia... Read more
Solar energy
View all related stories
Follow Us
Back to top