It might look like a humble camera but one piece of innovative technology has the potential to save hundreds of millions of dollars across the Australian energy sector. 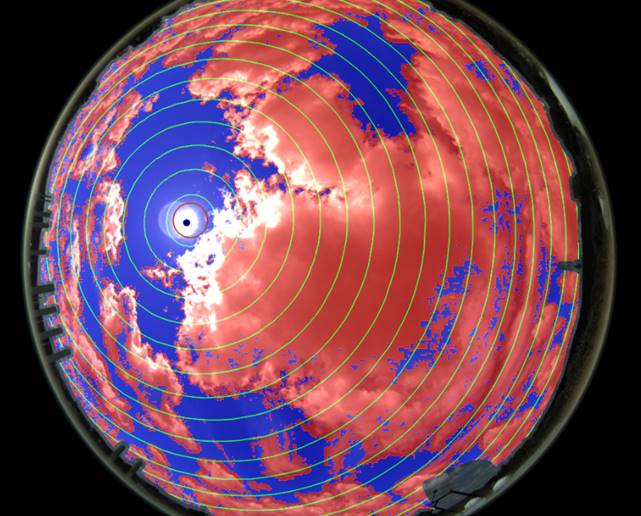 Plug and Play Solar Power eye in the sky.

It is called “plug and play” and the project, jointly funded by ARENA and the CSIRO, represents an important step towards a low carbon electricity system by reducing costs and improving stability and efficiencies of hybrid energy systems.

Hybrid systems usually consist of a mix of renewable generators like solar photovoltaics, and diesel generators. Integrating them can be complex, and until now, quite costly.

As Chris Knight, leader of the Plug and Play project says, “simply put, this technology reduces costs and fossil fuel consumption by smoothing the switch between solar power and diesel generators required by changes in the sunlight”.

The key technology is a sky facing camera, which monitors cloud coverage and feeds into a program that predicts how cloud movements will affect the photovoltaic output. Those predictions are integrated with diesel or gas powered generator, which can then be smoothly assimilated with the solar power, meaning they don’t have to suddenly switch on and fully power up, or even run continually on the chance they may be needed.

The cameras monitor clouds on the horizon, taking photos every 10 seconds and continually updating the Plug and Play program, from 15 minutes out to 10 seconds before a switch is required.

A typical set up, Knight says, would include a large photovoltaic farm supported by multiple diesel generators. Without the cameras, at least some of these generators would have to be running constantly, ready to support the energy system if the solar output is unable to supply power. With the Plug and Play technology, all the diesel generators can be switched off when they are not required, and one or more can slowly move to stand-by mode and then to required power ahead of need.

Fuel savings are found in not having to run generators all the time, but also in reduced need for rapid ramp up to full power when sudden change in cloud cover significantly alters the photovoltaic output.

Reducing the need for sudden ramp ups also reduces wear and tear on the generators, which in turn reduces the need for maintenance and replacement. Such costs can be particularly significant in remote settlements unable to access power from the national grid.

ARENA contributed $1.29 million to the overall project cost of $2.9 million but the technology has the potential to save hundreds of millions of dollars across the Australian energy supply, modelling shows.

The CSIRO is already considering further applications for the technology. Two Defence facilities in the Northern Territory have begun implementing Plug and Play in their Remote Area Power Systems, and another 3 sites are being scoped for future projects.

The Lend Lease housing development in Yarrabilba, South East Queensland is also trialling the technology, which will provide more detailed data on its application to grid connected residential energy consumption.

How do you get a power system to a re... Read more
Hybrid technologies
View all related stories
Follow Us
Back to top