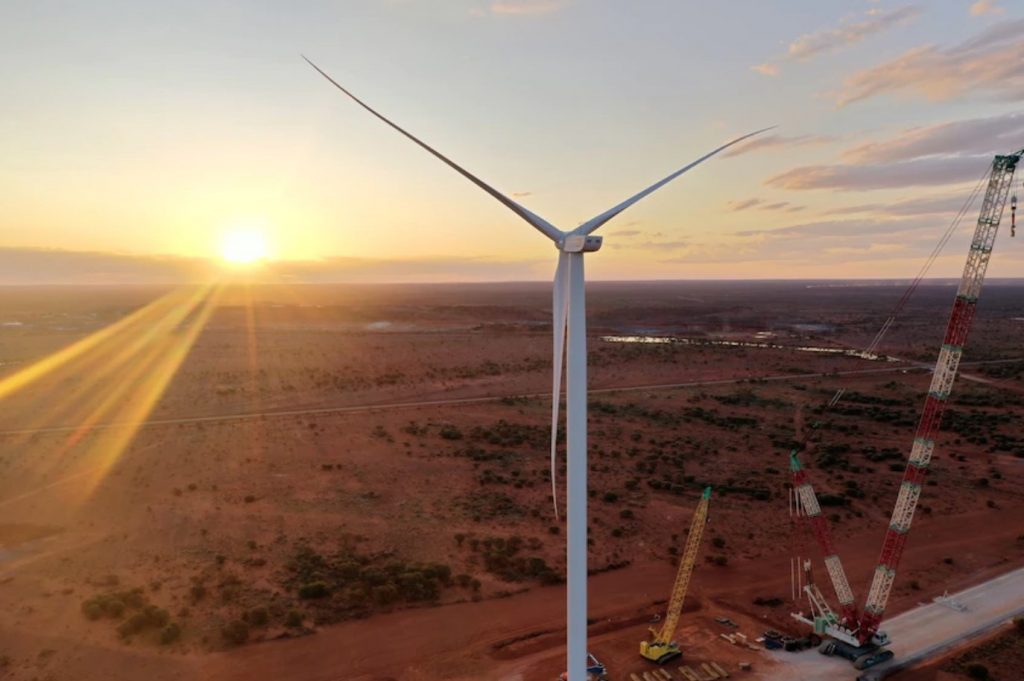 The wind turbines being installed on site. Image: Gold Fields

A Western Australian mine has become the first in Australia to install wind turbines, as part of a new microgrid that also includes solar, battery storage and a backup gas turbine.

Located nearly 1000 kilometres north-east of Perth, the Gold Fields Group’s Agnew Gold Mine is on track to source approximately 60 per cent of its overall energy needs from renewables.

Gold Fields partnered with EDL to design the hybrid off-grid system, approaching ARENA for support to deliver the first of its kind project.

ARENA announced $13.5 million in funding in 2019, building on previous support for renewable energy projects in the mining sector that includes solar deployments at Rio Tinto’s Weipa bauxite mine and Sandfire Resources’ DeGrussa copper and gold mine.

The five new 110 metre tall wind turbines have a collective output of 18 MW, which is paired with a 4 MW solar farm that contains nearly 11,000 panels.

Excess power from the wind turbines and solar farm is stored in a 13 MW/4 MWh battery, with gas and diesel generators on standby to provide backup power.

So far, the system is meeting expectations and on track to provide between 50 and 60 per cent of the site’s energy needs from renewables, with predictions that wind and solar will provide up to 95 per cent of demand at times.

An advanced energy management system allows for innovative practices that maximise the use of renewable energy, including dynamic load management and shedding and forecasting of future wind and solar production.

The hybrid system was commissioned at the height of the pandemic, officially opening in late 2021.

Announcing the completion of the project, EDL said the microgrid integrates the five technologies to achieve 99.99 per cent reliability, which was a non-negotiable requirement to meet the demands of off-grid mining operations.

EDL’s Chief Executive Officer James Harman paid credit to the team that delivered the project on time and on budget, despite the challenges caused by the pandemic and bushfires.

“Credit must go to Gold Fields for its vision and belief that we would successfully deliver this complex project; and credit must go also to the entire project team, including EDL and all our contractors, who worked tirelessly to safely deliver the Agnew Hybrid Renewable Project on time and on budget,” Mr Harman said.

He pledged to continue to work to allow others to share in the benefits of renewable energy.

“As the energy transition continues at pace, our ultimate goal is 100% renewables, and we look forward to continuing our work to make this a reality.”

Gold Fields Executive Vice President Stuart Mathews said it was important for the company to demonstrate leadership on the environment and sustainability.

“This project is a testament to what can be achieved by taking courageous decisions and demonstrating true leadership in how we can sustainably energise our mines in remote environments,” Mr Mathews said.

He believes the flagship project will deliver flow-on benefits.

“With demonstrated success in construction and now operation, this project has provided a framework to take innovative energy solutions further across Gold Fields’ mine sites both in Australia and around the world.”

One of the most expensive parts of ru... Read more
Hybrid technologies
Off the grid independence for Rottnest Island image

It’s a long way as the crow fli... Read more
Hybrid technologies
Time to ditch the generator? The town where renewables took over image

It was more than a moment. More than ... Read more
Hybrid technologies
Sustainable house solution powered by intelligent software image

As a nation we have fallen hard for r... Read more
Hybrid technologies
View all related stories
Follow Us
Back to top