Lord Howe Island draws thousands of visitors every year to experience plants and animals found nowhere else in the world. 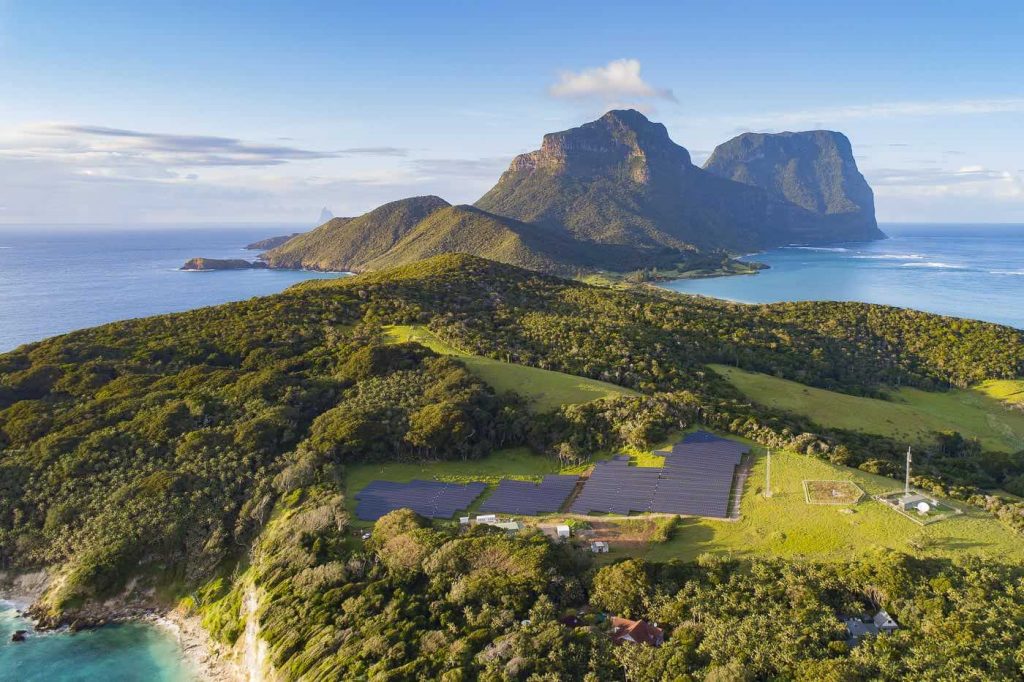 Lord Howe Island is a remnant of an extinct volcano. Image: Jack Shick

Located more than 600 kilometres north-east of Sydney in the Tasman Sea, Lord Howe Island is an eco tourism mecca.

With pristine beaches, lush rainforests and coral-rich waters, the UNESCO World Heritage Listed island is home to just a few hundred permanent residents, but draws in more than 16,000 visitors every year.

The island’s electricity needs have traditionally been met by diesel generators, powered by fuel shipped in from the mainland every two to three weeks.

But in a boost to the Lord Howe’s sustainable credentials, the board that manages the Lord Howe on behalf of the New South Wales Government embarked on an energy transformation in 2014, planning a hybrid wind, solar and battery system with diesel backup.

ARENA announced support for a revised project in 2019, which has gone on to install a 1.2 MW solar farm and 3.2 MWh of battery storage.

Construction of the solar and battery system began in 2020 and was commissioned earlier this year, with renewable energy now being fed into the island’s existing microgrid.

The hybrid system is expected to save nearly 400,000 litres of diesel every year, providing a boost to the island’s energy independence and environmental conservation.

ARENA provided $4.5 million towards the $11.1 million project, with the balance made up through a loan provided by the NSW Government.

The project builds on ARENA’s support for similar hybrid systems to be deployed on King Island and Flinders Island in Bass Strait, which to date have exceeded expectations and achieved extended periods of renewable-only operation.

When the funding for Lord Howe was announced, ARENA CEO Darren Miller said knowledge gained from the project will support other remote and isolated communities to make the switch from diesel to renewable energy.

The business plan for the project was first developed in 2014 around a hybrid of wind, solar, battery storage with diesel generators for backup power.

Over time the plan evolved to replace the wind turbine with a larger solar array, with a 2017 feasibility study confirming the revised system would provide the same benefits.

Community support for the project has been strong from the beginning, with a survey finding residents were unanimously in favor of the first iteration of the plan and 90 per cent of visitors saying that installing renewable energy would positively impact their decision to visit again.

The long planning phase required the Lord Howe Island Board to evaluate the project after the scope was revised to ensure their plan would keep up with the latest technology and community expectations.

They found that reconfiguring the solar panels into one lot rather than two would deliver better value, with other small changes made to improve amenity for locals during the construction phase.

Early performance indicates that the hybrid microgrid will reduce diesel consumption by around 70 per cent, but the growth of rooftop solar is also helping to maximise the island’s reliance on renewables.

Renewable energy is not without limit... Read more
Hybrid technologies
Spending on poles and wires pushes up your electricity bill. It doesn’t have to be that way image

One of the most expensive parts of ru... Read more
Hybrid technologies
Australia’s first hybrid wind and solar farm image

Introducing Australia’s first hybri... Read more
Hybrid technologies
A view to save millions: Our eye in the sky. image