The central Australian town of Alice Springs inspires many images. There are the surrounding attractions of the rugged MacDonnell Ranges, the mystical shapes of the Devils Marbles and the majesty of Uluru, and the thrill of outback adventures among remote communities. 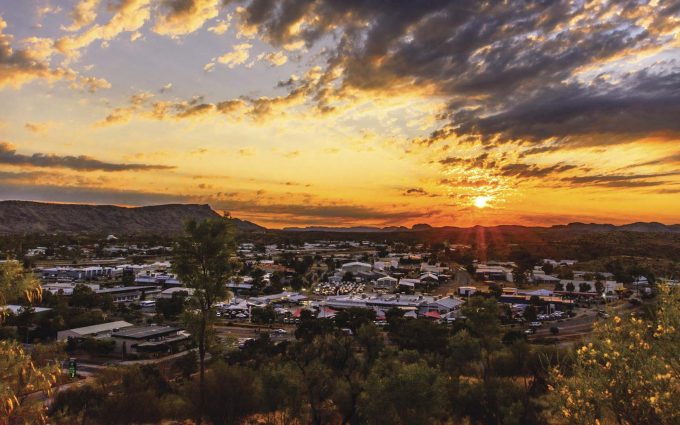 To those within the energy sector, Alice Springs represents an unique opportunity and one that could be of great significance to the National Energy Market.

With a population of 25,000 and a mix of residential households, commerce, industries and an airport, the town has an electrical grid that is of a size and complexity that makes it an ideal testing ground for ideas that could lead to a successful transition to a clean energy future.

Along with the rest of the Northern Territory, it faces the daunting challenge set by the Territory government’s pledge that 50 percent of the power supply would be sourced from renewables by 2030.

With this in mind, 50 industry representatives from across the Northern Territory and the country, came together in Alice Springs at the latest ARENA A-Lab workshop to examine the local grid and discuss ways for how this could be achieved. The gathering was co-hosted by the Intyalheme Centre for Future Energy.

The theme that Alice Springs was “small enough to manage, big enough to matter” pointed towards the town’s position as a test case for challenges that would be faced in the wider market as greater levels of renewables were fed into the system.

“It is a system that has a lot of the characteristics of many places in the NEM itself, and also the broader Australian system, but it’s at that scale where you really can test and trial and innovate and a scale that’s meaningful but not too cost prohibitive,” said A-Lab’s project lead Phil Cohn, an investment director in ARENA’s Business Development and Transactions team.

“Really importantly you’ve got government and community buy-in for progressively driving on renewable energy as well. That mix of the scale and the physical characteristics alongside the community buy-in make it a great place to trial new ways of working the grid.

“Alice Springs has this history of being a bit of a leading light nationally. They were a solar city a decade ago and they’re wanting to retake that initiative … to show how you can run a grid with high penetration renewables.”

Intyalheme general manager Sara Johnson said renewables penetration in Alice Springs stood at eight percent, while for the Territory it was only four percent, although that would be doubled by the recent commitments to solar farms around Darwin.

“It’s a really ambitious target particularly when you consider the physical challenge they have in terms of the grid configuration,” Cohn said.

“It’s actually a series of relatively small individual grids, there’s a Darwin-Katherine system, the Alice Springs system and a lot of isolated micro-grids and communities, and they’ve set themselves a target to hit 50 percent by 2030.”

Another challenge faced by the Territory’s energy sector was is the limited diversity of renewable resources available, with solar currently the only viable option. Rebecca Mills, general manager of major projects at Territory Generation said without alternative energies, – such as wind and hydro – achieving the target would be reliant on “oversizing solar systems” and storing the energy which was currently a costly process.

So how can the Northern Territory hit its 50 percent target?

“We’ve undertaken some modelling that really shows the first 30 percent will be reasonably achievable as long as some of the network constraints [can be] dealt with, but that’s really just matching supply and demand during the day-time hours.

“It’s possible but it will be challenging.”

Jim McKay, Power and Water Corporation’s chief engineer of power services, said it was good to have an ambitious target, but a number of issues must be resolved with the Alice Springs stand-alone grid before it could be achieved and “not being connected to other jurisdictions, these problems come upon us pretty quickly”.

“Some of the challenges that places like South Australia are facing now, in regards to inertia, we’ve always had underlying in our network and with the advent of additional PV those problems have to be resolved before we’re able to achieve the really high levels of penetration,” McKay said.

“We won’t be able to reach the target (particularly in Alice Springs), without some innovative thinking.”

“We’re not inter-connected and we can’t rely on other people to help support the network or get by when the sun’s not shining or those sort of things.

“We have to find solutions from start to finish completely within our boundaries.”

However, Intyalheme general manager Sara Johnston said the local industry players were committed to reaching the target and working through these challenges.

“Everyone’s really engaged and onboard and wants to be part of the solution,” she said.

Sara Johnston said Intyalheme was established by the NT government to promote collaborative solutions. It was, in a sense, a recognition that the target would not be reached through individual stakeholders pursuing their own agendas.

It is a philosophy that has a natural synergy with ARENA’s A-Lab mission to create cross-sector partnerships and innovative projects to transform Australia towards a clean energy future.

The A-Lab workshop was held over two days. The participants, which included senior industry representatives, toured key power system locations on the first day before they participated in a workshop designed to identify pathways to the desired future of 2030.

The participants developed proposals and designed pitches that were presented to an expert panel, known as the ‘Dolphin Tank’ (a friendly ‘shark tank’), that included the Northern Territory Minister for Renewables and Essential Services, the Hon Dale Wakefield, MLA. The intention is for Intyalheme and ARENA to work with the participants to fully develop and put the selected ideas into action.

“You go from a group of people who don’t know each other and facilitate conversations about the key questions, issues, barriers and opportunities around the future shape of the energy system in the Northern Territory, and then converge on specific project opportunities to help us realise that future,” Phil Cohn said.

“That culminated in the pitch presentations with the real intent for both Intyalheme and ARENA to take a look at those ideas and work with those key stakeholders to potentially take some of those forward to implementation.”

Rebecca Mills said the A-Lab sessions demonstrated that everyone was on a similar path.

“We have some different views about how to get there but it’s good to have those discussions and have the likes of ARENA and Intaylheme, who can focus on bringing it altogether over the next couple of years or putting into place an action plan for us,” she said.

The ideas that were pitched included:

Sara Johnston said Intyalheme has already began early planning on a project based on the ideas of the A-Lab sessions that would include a suite of actions over the next three to four years.

Electric vehicles next in line for rooftop solar image

Could electric vehicles be charged wi... Read more
Solar energy
A window into the future? How you might one day power your home or office image

Take a look at this map from The Worl... Read more
Solar energy
Planning for the future with solar forecasting image

Planning for the future with solar forecasting

Given the supply of energy from solar... Read more
Solar energy
View all related stories
Follow Us
Back to top