What began life as a way to provide renewable power to Australian troops on the ground even in remote locations could see solar energy powering disaster relief efforts, construction sites and even music festivals. 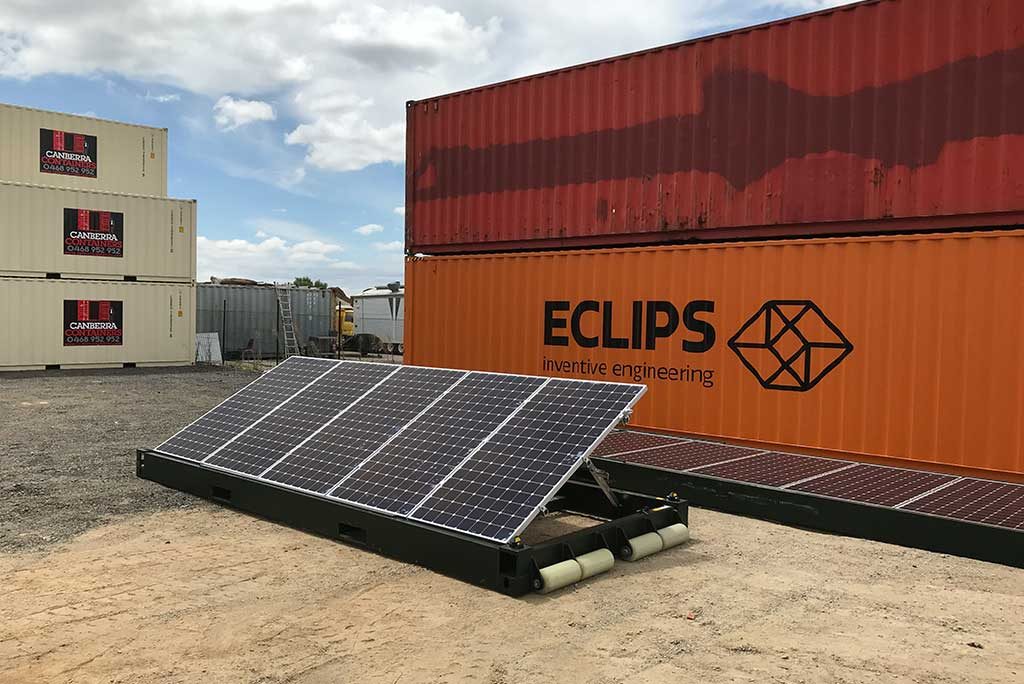 Canberra-based ECLIPS manufactures containerised, portable solar panels that can be quickly deployed in remote areas to create bases for industries such as mining, military and emergency services.

The portable solar panels are designed to fit inside robust and easily transportable standard shipping containers, CROSS units can be delivered to wherever they are needed and rapidly deployed to bring clean energy to remote or isolated communities in a way not previously possible.

The $700,000 CROSS project aims to fill a gap in the Australian market for renewable energy systems at small commercial scale (100-500 kW) that can be easily moved and temporarily deployed (for days, months or up to a few years).

ARENA has contributed $290,000 towards the design, manufacture and testing of the system.

The CROSS units come ready to use in either 20ft and 40ft containers. Factory assembled and pre-wired to a DC isolator, they can be rolled out and set up in minutes, ready for connection to an inverter.

The arrays have maximum outputs of 2.1kW and 4.3kW respectively, and up to seven can be stacked in a single container, which allows a generation capacity of 30kW for each 40ft container.

The system could bring renewable energy to various applications that usually rely on diesel generators such as defence, disaster recovery, humanitarian, construction and temporary network augmentation.

ECLIPS Managing Director, Shaun Moore said that the original objective for CROSS was to improve power self-sufficiency for Defence Users.

“One of our early objectives was to provide rapidly deployable utility scale PV generators to improve the self-sufficiency of Defence’s deployed forward operating bases. Diesel consumption related to the provision of electricity can account for up to 70% of deployed forces fuel usage and is a significant cost driver. More importantly, deploying CROSS to forward operating bases also reduces the frequency of convoys for fuel resupply, which reduces the threat to soldiers in contested environments. These same logistics efficiencies and benefits are transferrable to commercial and utility customers in remote areas of Australia.”

Renewable energy to the rescue

“CROSS units offer immense benefits in being able to be deployed in off-grid and fringe-of-grid areas, and even have the potential to offset diesel consumption and improve the security of existing networks,” Mr Frischknecht said.

“These renewable options can reduce some of the barriers to entry for potential renewable power users in remote locations, including short project durations and where power systems need to be periodically relocated.”

A new resources boom beckons, where A... Read more
Solar energy
View all related stories
Follow Us
Back to top