This International Women’s Day, ARENA is joining with organisations around to world to celebrate women’s achievements, raise awareness against bias and take action towards equality. 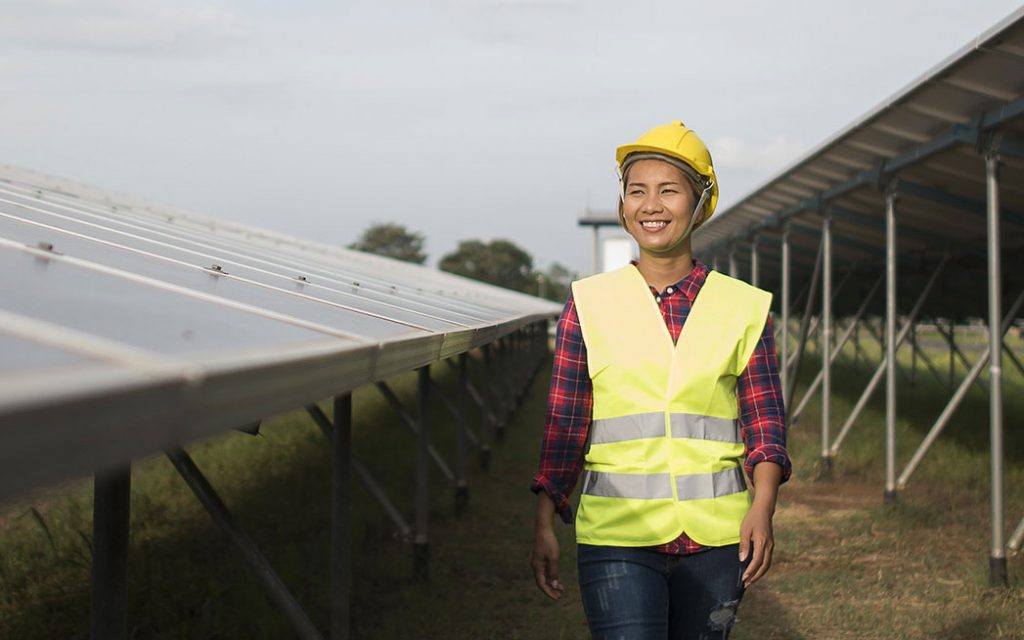 To better understand the challenges, we asked ARENA staff whether they have observed gender bias in the energy industry and looked at ways to break down barriers to participation.

ARENA’s General Manager of Project Delivery Alison Reeve says the imbalance she has seen in the energy industry likely arises from systemic issues.

“I think on the technology side, there’s definitely a gender imbalance, which probably reflects a more general imbalance on STEM-related skills and careers,” she told ARENAWIRE ahead of International Women’s Day.

“But the energy industry is about more than technology, it’s also about finance and law, and consumers, and in those fields, I think there’s a better but not perfect balance across genders.”

She recalled a time when a client asked her boss to replace her with a male engineer on a project.

“My boss had to break the news to him that I was the only engineer in the Australian office, so it was me or no-one! And of course I can give you a thousand examples of experiencing this…and fifty examples of times I called it out.”

Reflecting on ways to improve representation in the energy industry, she said more could be done to encourage girls in their teens to consider renewable energy as a career path.

“Many of them are passionate about action on climate change, but we know from surveys that the STEM pipeline is “leaky” and young women begin to select out of potential careers in energy from a young age.”

“Role models and visible examples are important, but encouragement isn’t just the job of women in energy, it’s men’s job too,” she said.

On this point, she reinforced the need to make people more aware of gender bias and play a part in fixing it.

Nicky Scheltus from ARENA’s knowledge sharing team backed the International Women’s Day call to celebrate achievements, but said she is more focused on ensuring there are equitable opportunities to achieve success.

She shares Alison Reeve’s focus on improving the pathways to women to enter the energy industry.

“Getting more women into engineering or technical university courses and graduate roles is an obvious one. While there has already been lots of work in that area, there is still room for improvement,” Ms Scheltus said.

“There are a multitude of reasons that contribute to gender imbalances in the workplace, and they can’t only be solved by the workplace – a whole of society approach is needed,” she said.

To achieve the Women’s Day call to raise awareness of bias, she said it is important to think honestly about privilege and learn how factors outside your control influence your life: “Whether that’s your gender, the post code in which you were born, or the education level of your parents.”

ARENA CEO Darren Miller commended initiatives like the Clean Energy Council’s Women in Renewables program, contrasting its success showcasing and celebrating the achievements of women in the industry with the ongoing male dominance of engineering roles.

“As the energy system evolves to be more about energy conservation and sustainability and consumer engagement, I am confident that the industry will be more balanced and inclusive towards women and diversity in general,” Mr Miller said.

Acknowledging that ARENA has almost equal numbers of men and women, he said there is more that can be done to provide an inclusive working environment that appeals to everybody, including working mothers.

“I love that ARENA has a flexible model where people can work from home when they need to and so long as the job gets done we are not an organisation that needs to see you sitting at your desk from 9 to 5.”

“I would really like to see more women in our investments team which is currently male skewed and reflects the general make-up of the banking and finance sector where many of these ARENA people come from.”

He cites COVID as potentially helping to break down some of the barriers by normalising working from offices or home on equal basis, as well as helping to accept life intruding into work.

“Today I had a meeting with a woman who was taking care of her 9-month old baby. I have children of my own and I was quite comfortable making faces at the baby and allowing the person I was meeting with to break every few minutes to settle her child.”

“I think we’ve come a long way in accepting the realities of modern life and allowing everyone the opportunity to participate equally. We’ve got a lot more to do but we’re making progress,” he said.

The matchmaking event brings together... Read more
General
ARENA and friends take over the corridors of power image

ARENA is all about moving towards a b... Read more
General
Paper mill takes out inaugural Clean Energy Integration award image

We know that using energy more effici... Read more
General
View all related stories
Follow Us
Back to top