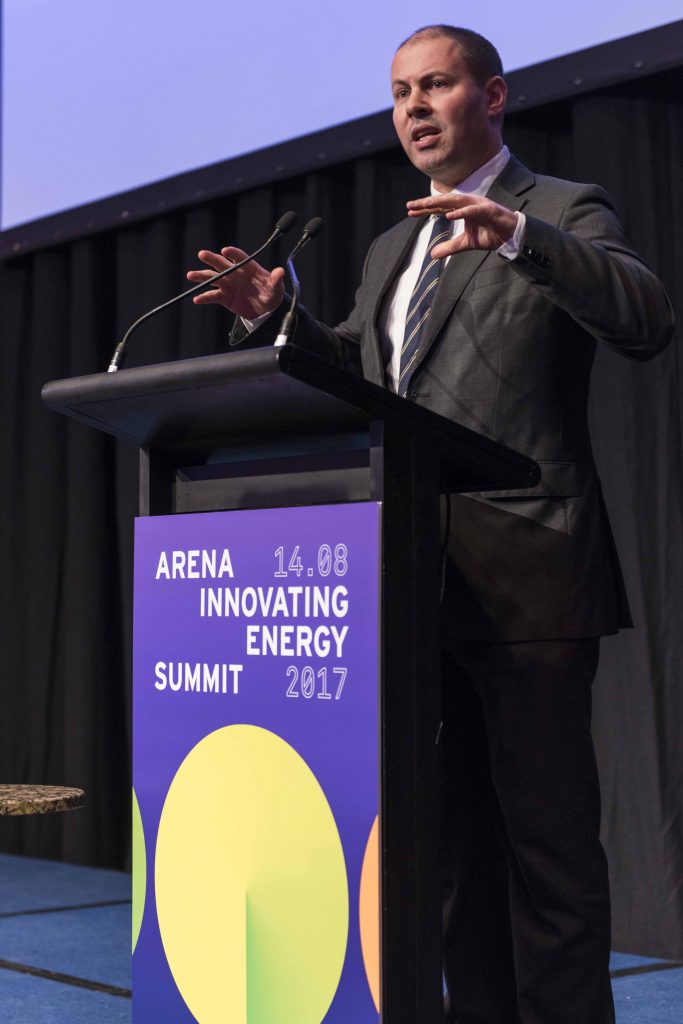 That was the word Environment and Energy Minister Josh Frydenberg used to describe Australia’s shift to a renewable energy future at a cocktail event hosted by ARENA at Parliament House on Monday night.

“The transition underway in our energy markets is unstoppable,” he said. “The question for governments is how do you manage that transition?”

It was very much the theme of the night. After a day in which speakers and delegates at ARENA’s Innovating Energy Summit had outlined the massive technological advances taking place in the renewables sector all over the country, speakers at the evening event sought to make a different point.

Without the right policy settings and regulatory environment, without cooperation and collaboration between different parts of the renewable energy ecosystem, without a commitment to transitioning from technological possibilities to real-world solutions the massive promise of renewable energy will not be fully realised.

Chief Scientist Alan Finkel had a simple but important message for the assembled industry and political leaders.

“Embrace disruption but do it responsibly”

Dr Finkel said the day had provided fascinating detail about an extraordinary set of new technologies that could be integrated into the future energy system.

“We are facing the greatest wave of disruptive technology in this industry since the time that we rolled it out back in the 1930s,” he said. “It’s not easy to do but you’ve got to start by being optimistic.”

“Everybody in the conference today was exuding through their talks, their questions and their response, an optimism that things will actually work out. If we take that optimism and bottle it and turn it into gigajoules we could run the country for a few seconds I’m sure.”

But the man responsible for this year’s review into the nation’s energy security said the biggest challenge was taking those ideas and optimism and turning them into something meaningful.

“I don’t think that until recently we were doing that all that well,” he said.

“But the collaboration that ARENA is doing now with AEMO and the original projects that ARENA is funding with support of CEFC are extraordinary. I’m seeing rapid, tangible integration of new technologies into the market in a way that wasn’t being done two years ago.”

Dr Finkel said collaboration was key to making a new energy system work, as was setting the appropriate market signals and a political climate in which change could effectively take place.

The revolution has begun

Minister Frydenberg said the fact that so many parliamentarians from all sides of politics had come out to engage with leaders in the renewable energy field was testament to the importance of the role the industry will play in Australia’s future.

“ARENA and the CEFC are at the forefront of a revolution,” he said.

“What these organisations have been able to achieve in recent years in behind-the-meter technology, demand side management, energy efficiency, large scale solar and storage technology has been quite incredible.”

The Minister praised ARENA and the CEFC, saying that the two organisations could claim direct credit for incredible reductions in the cost of deploying renewable energy technologies such as solar PV.

”In 2014 as part of a large scale solar round the support that was required from ARENA to get projects off the ground was $1.60 per watt,” he said.

“Two years later in 2016 it was down to 19c per watt. That’s a dramatic transformation in the cost curve, due in no small part to the massive investment that’s underway.”

Mr Frydenberg said that looking around at the summit’s exhibitors he had been particularly struck by the way many projects were benefitting regional communities, pointing to projects such as Solar SetUp, which is bringing solar energy to indigenous communities in the Northern Territory in collaboration with the territory’s government.

”You can take people off the dirty diesel generators, get them onto a renewable energy source, get a better more reliable source of power, a cleaner source of power and certainly a more cost effective source of power.,” he said. “That’s a great result for everyone.”

ARENA Chief Executive Ivor Frischknecht cautioned the gathering that despite the exciting technological innovations on show, transformational change would not be instantaneous.

“There is a turbo lag between when a new technology is discovered and when the mass application of that innovation kicks in,” he said.

That means that new technologies are changing the future economics of energy but that mass application has yet to happen.

“Australia needs to prepare, to plan and to invest for that change,” the ARENA Chief Executive said.

It’s for that reason that ARENA is working to accelerate the shift to renewable energy by speeding up the pathway from innovation to commercialisation. To date, the agency has supported 280 projects that – without ARENA’s assistance – would not have happened, he said.

“Thanks to our work, 142 new technology patents have been filed, 230 MW of solar power has been added to the grid and hundreds more are under construction now, two and a half billion dollars of third-party investment has been unlocked and that much again is currently in our pipeline.”

ARENA’s assessment is that the large scale solar industry has been become commercially viable five years ahead of schedule because of its input. More than 1400 jobs, many of them in regional areas, have been created.

“These are encouraging results. But we are just beginning,” Mr Frischknecht said.

“The good news is Australia has the knowledge and the skills to benefit from this change.”

Australian universities hold dozens of world records for the efficiency of solar cells. As a result, the ARENA CEO said, key parts of the core intellectual property for the entire world’s PV panels are Australian.

“Soon, most of the solar panels in the world will be more efficient for the same cost as a result of intellectual property developed here. That is a tremendous contribution to reducing climate change globally.”

Mr Frischknecht said the Finkel Review gave the energy sector the blueprint it needed to move forward. But to make this future work, he said, Australia needs to continue supporting research and development. It also needs to test new technology in application and it needs a cooperative and considered regulatory environment.

ARENA is pleased to be involved in all three of those enterprises.

ARENA is all about moving towards a b... Read more
General
2021 Renewable Energy Founder Forum – Invitation to startups image