New, efficient home designs will be created in Melbourne’s west by one of Australia’s largest real estate developers. 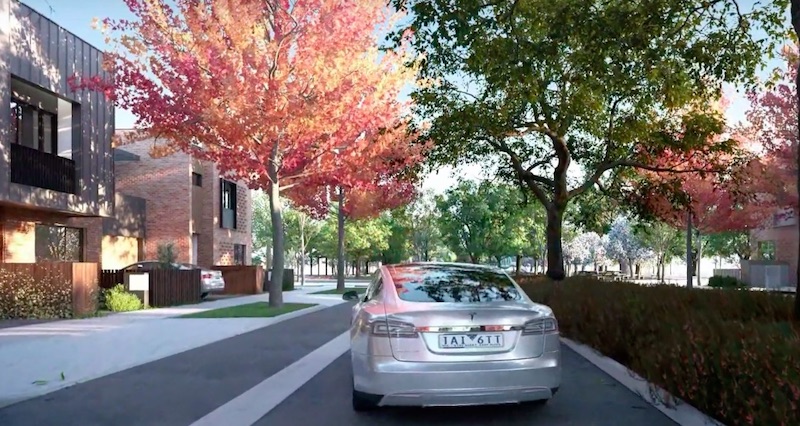 As part of the first phase of Mirvac’s new The Fabric development, 49 new townhouses with efficient home designs will be built in Altona North, about 10 kilometres from the Melbourne CBD.

The homes will use rooftop solar panels to produce renewable energy onsite, which will be stored in home batteries. To minimise the amount of amount of energy needed to power the homes, a number of efficiency measures will be built into the designs.

The first phase of the development will construct two, three and four bedroom townhouses, which depending on their size will be fitted with a rooftop solar system with at least 3.8-5 kW capacity. Mirvac intends for mid-rise apartment buildings to be incorporated into future stages.

How will efficient home designs work?

The homes will be able to provide demand response, with electrical devices equipped to communicate with the electricity grid and power down in the event of shortfalls in electricity supplies. There will also be provision for electric vehicle charging through a 32 Amp electrical point installed in each garage.

The efficient home designs project aims to demonstrate that net zero energy homes can be built at scale. By definition, ‘net zero energy’ houses offset their total energy usage with renewable energy generated onsite. If successful, The Fabric will accelerate the uptake of the concept across Mirvac’s residential portfolio, and the housing industry more broadly.

According to Mirvac’s Victorian General Manager of Residential Elysa Anderson, the net zero energy homes at The Fabric will offer both environmental and economic benefits.

“Lower energy consumption enables families to spend less money on their utility bills; it’s also the most responsible and sustainable choice for future generations,” she said.

According to Ms Anderson, Mirvac wants to reduce environmental impacts as well as the cost of running the homes.

“We have committed to an extensive trial of the net zero energy homes sustainability model, where the goal is to create net-zero energy homes by incorporating low energy use and renewable energy power,” she said.

While most Australian states require new homes to be built to achieve a six star energy rating, research released by the Energy Energy Council (EEC) in mid-2019 found that adopting energy efficiency policies mandated in Germany would save the average Australian household $790 a year on their energy bills.

At the time the report was launched, EEC CEO Luke Menzel said improving energy efficiency is the single most powerful too available to cut energy bills, improve energy security and act on climate change.

“Australian governments are at the back of the pack on energy efficiency. If Australia replicated best practice from places like the United States, Germany, Japan and China it would be a gamechanger for energy affordability and the economy,” said Menzel.

In September, Australian researchers found that more than 80 per cent of new houses were built to the minimum allowable standard, with just four per cent exceeding a 6.9 star rating. This is despite evidence showing that investing small amounts upfront in improvements to achieve a higher star rating are more than paid back over the life of a home.

ARENA is providing $784,000 towards the $2 million project, under its focus on improving the way renewable energy is integrated into the electricity network.

ARENA CEO Darren Miller says that Mirvac’s trial will help the housing industry to improve the way energy efficiency and renewables are incorporated into new homes.

“Mirvac’s trial will hopefully encourage a step change in the housing industry. Through this project, Mirvac will be able to offer home buyers features that will help reduce energy use, energy bills and emissions from the beginning,” Mr Miller said.

ARENA is providing funding to a number of projects developing innovative ways to use, store, manage and share distributed energy. To date, this includes a funding round for projects that improve the integration of DER into the network, a trial integrating virtual power plants into the National Electricity Market, funding for Monash University to establish an embedded network powered by renewables at their Clayton Campus, and others.

“The Altona North site will provide the perfect test case in pushing to create change in the building industry and also inform potential buyers about the benefits of owning a net zero energy home,” he said.

As part of the project, Mirvac will share cost-effective designs to achieve seven star performance, and undertake research to gauge how the market responds to the new homes.

A new way of providing energy to isolated communities? Look to the Horizon… image