For the hordes of tourists who make their way to Victoria’s Wilsons Promontory each year the Fish Creek Hotel, with its sculpture of a giant fish atop the roof of a splendid art-deco building, is an unmistakeable landmark. 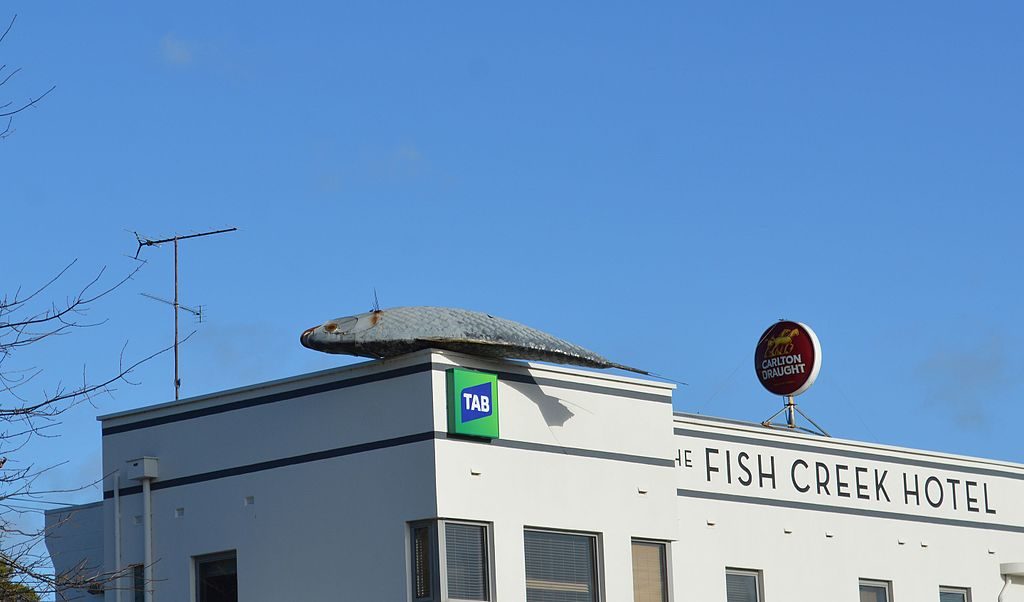 Fish Creek pub with solar fish situated on the roof.

But now this classic Aussie pub has become a landmark of a different kind, a renewable energy leader that is showing the way for other local businesses.

The “Fisho Pub” as it’s known has long been famous for what sits upon its roof. Now you can add to that, row upon row of gleaming solar panels.

Kevin Peavey, who co-owns and runs the hotel together with his wife, Karyn, and brother, Terry, said despite doing his bit for the environment including recycling, he wouldn’t claim to be a greenie.

Yet, he said the decision to install the 92 solar panels on the back of the iconic building and the adjoining nine-bedroom motel was a “no brainer”.

“It was really the rising cost of electricity,” Mr Peavey said.

“Our electricity bill is monstrous every month and … so we decided to investigate.”

Built in 1939, the pub, with its nine-bedroom motel, seven hotel rooms and a popular bistro, runs “a couple of great, big cool-rooms,seven freezers, 15 fridges, and big exhaust fans in the kitchen”. Then there is the electricity required for heaters, air conditioners and bain-maries.

Mr Peavey said the 200 or so appliances were producing an energy bill of about $3000 per month – maybe more in the summer.

Installing the solar panels last week means the hoteliers are predicted to reduce bills by 25 per cent annually, thanks to the average five-hours of sunlight they get daily.

The Peaveys’ spent about $25,000, after federal government rebate, on the 25kW renewable energy system, which will take them about three years to recoup.

“This is about the biggest system we can put on with our roof space, but it won’t cover anywhere near our daily usage,” he said.

Andrew McCarthy, the managing director of Gippsland Solar, who installed the system, said it would produce 90 kWh a day, covering 25 per cent of the hotel’s needs.

In a bid to sweeten the deal, the company also installed a free charging station for Tesla electric vehicles.

“The Fish Creek Hotel is a high-end hotel that caters to the high-income drivers that Tesla drivers represent,” Mr McCarthy said.

“Fish Creek was the perfect location.”

He said the station would attract EV or electronic vehicle tourists to the pub.

For Mr Peavey the seed for solar was planted when they lived in Townsville, QLD for a while.

He said although his Gippsland neighbours were taking up solar energy, he didn’t know of any pub that had installed the system.

So was installing the solar panels a win-win situation for the Fish Creek Hotel?

“It was purely a business decision to save money. It is a no-brainer, because it’s profitable for the business.”

READ MORE: AN INNOVATIVE IDEA PUT SOLAR PANELS ON THE ROOF OF THIS WINERY

Take a look at this map from The Worl... Read more
Solar energy
Why sheep could be good for your solar farm image

No one predicted the rate at which so... Read more
Solar energy
Off the grid independence for Rottnest Island image

It’s a long way as the crow fli... Read more
Solar energy
View all related stories
Follow Us
Back to top