It’s not every day you get to launch something called “the Batt Lab.” 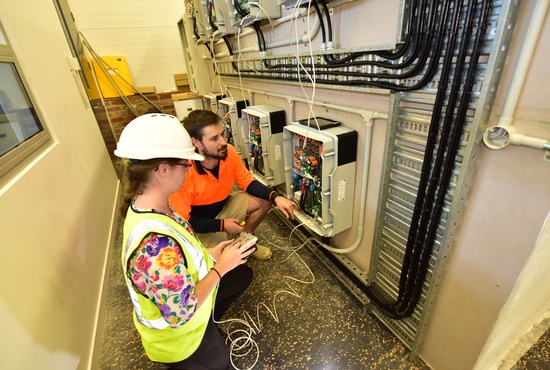 Though it may sound like a superhero’s lair this is, in fact, a world-first battery testing facility. It will give consumers and businesses unprecedented independent information about the rapidly-expanding world of battery storage.

If you’ve ever wondered which battery is the best option for your home solar system, Batt Lab will supply you with reliable, independent answers.

The ITP Renewable Battery Test Centre was launched in Canberra on Thursday. The centre’s climate controlled laboratory (known as the Batt Lab) will test the performance of batteries designed for homes and small businesses and provide robust, independent results for consumers.

Ongoing test results are published in real time on the centre’s website. They will provide information to help consumers navigate what has been a sometimes-confusing marketplace, filled with jostling brands like Samsung. Tesla, Sony and LG.

More than 1.7 million homes in Australia currently have solar panels installed and thousands of households have added home battery storage over the last couple of years. Those numbers are expected to skyrocket as the price of batteries comes down and the price of grid electricity rises.

In 2015, Morgan Stanley projected the Australian residential energy storage market to be worth $24 billion. That was prior to the arrival of Tesla’s hyped Powerwall 2, which had a huge impact on public awareness and acceptance of battery technology. The Finkel review reinforces the importance of so-called ‘energy behind the meter’, with the Chief Scientist recommending a stronger future focus on energy storage.

But which product should consumers opt for? Battery technology has improved rapidly in recent years, making it much more appealing to the average home owner. But it can be difficult for consumers to keep up with new technology.

Which battery will last longest, perform best or give the highest return on investment? How well will different products perform in the harsh Australian weather?

For the first time consumers will now have access to independent and reliable answers to these and other questions.

The testing centre has the backing of battery manufacturers keen to prove their technology to the market, and is supported by $870,000 in funding from ARENA, part of the agency’s commitment to accelerating the path to a renewable energy future. All of the batteries are purchased from third party distributors, so there’s no cherry picking by manufacturers.

For the initial six-month set up phase, eight batteries were put through their paces in conditions specifically designed to mimic changeable temperatures typical to the Australian climate. While it’s too early to give meaningful insight into long term performance, phase one ironed out plenty of kinks and allowed for another ten batteries to be included in the testing for phase two.

READ MORE: THERE’S A LOT OF TALK ABOUT ENERGY. HERE ARE THE FACTS

What will they test for?

The testing centre will test and report on capacity fade, efficiency and charge acceptance for each of the installed batteries.
Capacity Fade: As anyone who has a smartphone knows, the amount of charge a battery can accept decreases with use. Each installed battery in the Batt Lab will mimic nine years of use over three years, by charging and discharging three times a day.
Efficiency: In simple terms, this measures how much energy is lost when it is stored in the battery. In other words, how much energy a battery can discharge compared to the amount of energy required for charging.
Charge Acceptance: The amount of energy a battery can accept during charging. The higher the charge acceptance the faster a battery can charge.

Which batteries are bing tested?

What are the results to date?

With only six months of results available, it’s still too early to provide conclusive results. Batteries are a long-term investment and this data only mimics 1.5 years of an expected nine-year testing cycle.

Initial results however, are encouraging.

So far, capacity fade appears to be slightly higher in batteries with higher cell temperatures, like the LG Chem. But again, more time is needed to determine real world implications.

More information about the tests, results and batteries installed at the testing centre is available on the Battery Test Centre website: http://batterytestcentre.com.au/

This article was originally written by Jane Gilmore, Freelance Journalist.

In more than one way this was big. It... Read more
Battery storage
AGL plans big battery in the desert image

Is it possible for wind and solar to ... Read more
Battery storage
View all related stories
Follow Us
Back to top