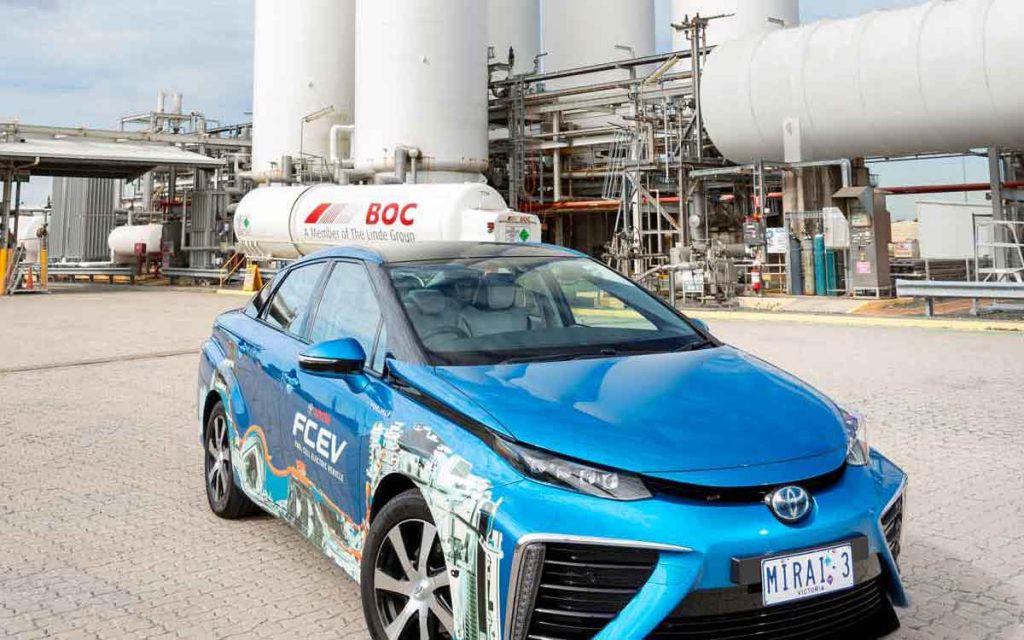 The $3.1 million pilot project will install a 220 KW electrolyser and 100 KW solar array at their Bulwer Island facility, situated north east of the Brisbane CBD near the mouth of the Brisbane River.

ARENA has provided $950,000 in funding to the project, which will utilise some of the gas infrastructure already on site and provide a local refuelling station for hydrogen fuel cell cars.

BOC South Pacific’s Managing Director John Evans said the project will take advantage of BOC’s existing infrastructure and expertise to support the growth of hydrogen as a zero emission fuel.

“BOC is proud to be establishing a local supply of renewable hydrogen in Queensland that can be easily scalable and replicated across the country. We will also demonstrate our leading refueller technology that has been widely adopted across Europe and the US.”

“The renewable hydrogen we produce will provide added environmental value to our industrial customers and facilitate the introduction of HFCEVs [hydrogen fuel cell electric vehicles] in Queensland, while supporting our own production processes at Bulwer Island,” he said.

The project advances on the company’s existing hydrogen production from fossil fuels at their Altona site in Melbourne’s western suburbs. As well as avoiding the need to transport hydrogen over long-distances, the new electrolyser will help to advance technology that will be vital to creating an Australian hydrogen export industry.

ARENA has thrown its weight behind the development of hydrogen as an alternative fuel source, funding research and demonstration projects to give the technology a foothold in Australia. ARENA CEO Darren Miller said BOC will demonstrate the production and use of renewable hydrogen in refuelling, and capitalise on existing gas production and supply chains.

“Hydrogen is a huge opportunity for Australia, both in our domestic economy and internationally as an emission-free energy source,” Mr Miller said.

“In Australia, hydrogen has applications across transport, heavy industry, and as energy storage injected into our existing gas networks. Internationally, we are well placed to become a leading exporter of hydrogen,” he said.

Minister for Energy and Emissions Reduction Angus Taylor said that estimates show global annual demand for hydrogen as an energy source is expected to grow from around 1 million tonnes at the present day, to around 35 million tonnes by 2040.

“The development of large-scale hydrogen production, storage and export facilities could deliver economic benefits to Australian businesses and communities and provide reliable, affordable and low emissions energy to overseas trading partners,” he said.

BOC’s announcement builds on Jemena’s Power to Gas demonstration, which will store green hydrogen in the 25,000kms of pipelines across the New South Wales gas grid and also deliver a Sydney refuelling station for hydrogen vehicles. In March, car manufacturer Toyota announced that they will build a Victorian refuelling station, supplied by the new Hydrogen Centre being built at the site of their former assembly line in Altona. Both are supported by ARENA funding.

The demonstration projects come after ARENA found that Australia is well-positioned to become a leading exporter for hydrogen, with global demand expected to increase significantly in the coming decades. According to the report prepared by ACIL Allen, Australia’s hydrogen export industry could be worth $1.7 billion annually by 2030, and account for 2800 jobs.

The agency has also provided $22.1 million in funding for 16 projects undertaking early stage research into exporting hydrogen, and is contributing to the National Hydrogen Strategy being led by Chief Scientist Alan Finkel.

In late July Western Australian gas distributor ATCO cut the ribbon on its new Clean Energy Innovation Hub, where they aim to find ways to grow the use of hydrogen and biogas as part of the transition to renewable energy.

As well as building a new microgrid powered by a 300 KW solar array and 500 KWh battery system, the project showcases a 150 KW electrolyser and 5 KW hydrogen fuel cell.

ARENA has partnered with ATCO on the hydrogen research and development aspects of the project, which has included the construction of a display home at their Jandakot headquarters where hydrogen blended with natural gas is tested on household gas appliances.

ATCO says the project will build an evidence base that shows the potential for hydrogen to act as a balancing fuel for the electricity grid, and also be blended into the existing gas network.

A new study will assess a plan to pro... Read more
Hydrogen energy
Darren Miller on the future of hydrogen image

Adapted from a speech delivered by AR... Read more
Hydrogen energy
View all related stories
Follow Us
Back to top