Sydney’s Maritime Museum has sailed into the future by installing cutting-edge lightweight solar panels on the roof of one of its Darling Harbour buildings. 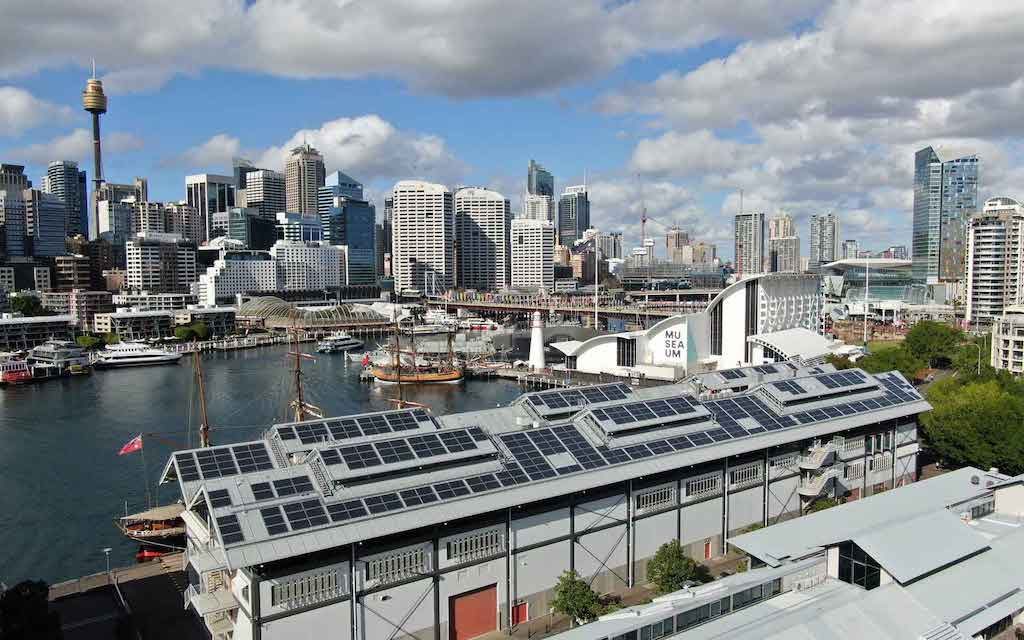 Arial view of the solar panels on the Maritime Museum roof.

Until now the Australian National Maritime Museum has been unable to install solar panels on their Heritage Centre because the steep roof cannot support the weight of conventional photovoltaic panels produced with a plate of glass.

But thanks to an innovative glass-free design from Chinese-Australian solar scientist and entrepreneur Dr Zhengrong Shi, the Museum last week celebrated the official unveiling of 235 KW system which will supply 25 per cent of its electricity needs.

The Museum’s CEO and Director Kevin Sumption said they had been exploring the possibility of installing solar for several years, but none of the existing designs could cope with the limited weight bearing capacity of the heritage building’s 30 degree pitched roof. Then the Museum discovered eArche, SunMan’s super lightweight solar panel technology. Built with a composite polymer in place of glass panels, eArche solar panels are 70 per cent lighter than a conventional glass solar panel and much thinner. The material is similar to that used in aircraft windows, delivering a durable and cost effective panel with no glare.

An array of 812 panels now sit above the Wharf 7 Maritime Heritage Centre, which houses the Sydney Heritage Fleet, as well as collections of significant historic boats and office space.

The fund’s co-investors ARENA and Softbank China Venture Capital each contributed $3.3 million to get the project off the ground.

ARENA CEO Darren Miller said SunMan’s innovations are helping to make solar a key part of the building process, and allow solar to be installed on curves surfaces or heritage buildings.

“The Southern Cross Renewable Energy Fund challenges companies and entrepreneurs to think outside the box and SunMan has achieved this,” Darren Miller said.

Dubbed the ‘Sun King’, Dr Shi is a former student of UNSW’s ‘Solar Superman’ Martin Green, and the founder of Suntech Power. Dr Shi has ridden the solar industry’s highs and lows, becoming the first solar billionaire and one of China’s richest people before Suntech Power succumbed to an oversupply in production from rival Chinese manufacturers, soon after undertaking a rapid expansion.

Chinese-born Shi is credited with helping to drive down the price of solar technology by establishing manufacturing facilities in his home country. After studying at UNSW, he was convinced to return by the low cost of skilled labor, Chinese Government incentives to draw back citizens that have studied abroad, and a grant from Wuxi authorities to establish a local manufacturing plant.

Dr Shi said the eArche solar panel will enable more companies to embrace renewable energy to reduce their carbon footprint and save money.

“When I developed eArche I knew it could unlock the potential for solar on buildings which were previously unable to support conventional glass solar panels,” Dr Shi said.

The same eArche solar cells are being used to power a tourist train shuttling the three kilometre journey between North Beach Station and Byron Beach in Byron Bay. The train’s 6.4 KW solar system is paired with a 77 KWh battery to complete 14 round trips every day, and was a finalist in the Clean Energy Council’s 2018 Solar Design and Innovation Awards.

At the launch at Maritime Museum, Dr Shi said there was potential for eArche panels to be installed on industrial, commercial and residential buildings that currently cannot access solar due to weight bearing issues or design constraints, and for further innovation to allow solar panels to become part of building materials.

The Maritime Museum is now in discussions with Energus to look at creating white solar panels that could be installed directly on the iconic Maritime Museum’s famous white curved building.

With the power to slash power bills a... Read more
Solar PV R&D
View all related stories
Follow Us
Back to top