Renewable energy can greatly benefit the mining industry and should help to shape the future of the mining sector in Australia. 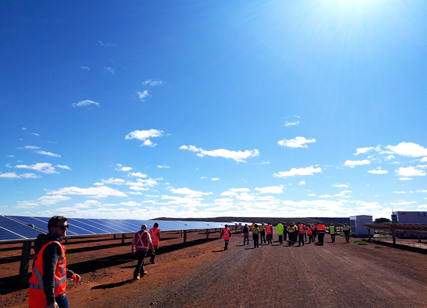 That was the message from Australian Renewable Energy Agency (ARENA) Chief Executive Ivor Frischknecht to a crowd of mining industry leaders at The Energy and Mines Australia summit.

Held in Perth, the summit brought together the mining industry’s most senior members to explore solutions for reliable, renewable and cost effective power solutions for mines.

Mr Frischknecht said ARENA had been involved in helping create off-grid renewable energy solutions in some of the toughest environments in the world.

“Remote area renewables was actually the first big ARENA initiative back in 2013,” Mr Frischknecht said. “It was about displacing diesel in communities and in mines. We’ve learned a lot since 2013”

One such example is Sandfire’s DeGrussa mine, 900km north of Perth, which installed a hybrid solar/battery system which is the largest of its kind in the world.

The ARENA-funded project consists of a 10.6 MW solar array with 6 MW (1.8 MWh) of lithium ion battery storage. Together the project is reducing the mine’s consumption of diesel fuel by 5 million litres every year.

It’s also positioning the mine, and its parent company, for a more reliable and sustainable energy supply to call upon in future. Mining industry leaders from all over the world toured the DeGrussa site recently, hungry to learn how they could apply lessons from the project elsewhere.

And with the DeGrussa project already a stunning success, Mr Frischknecht said it was no surprise that other miners were paying attention and looking to follow suit.

“We’re getting to the point where the risk of not doing anything, not engaging in this space, is becoming rather higher than simply getting in there and starting to work on something,” he said.

“Once done, it will enable you to mitigate risks around costs, social license and carbon regulation.”

But greater deployment of renewable energy is not just about mitigating risk, the ARENA CEO said. It could also help companies in securing new business if they are seen to be reducing their emissions and reliance on diesel fuel.

“It helps them (Sandfire) in the context of a new mine. It becomes much easier to convince the regulator that you do genuinely care about environmental issues and that you are going to take remediation seriously when you have already blazed the trail with renewable energy,” said Mr Frischknecht.

Mr Frischknecht encouraged all of those attending the summit, and in the industry more broadly, to get involved with ARENA and find out how the agency can help with future projects.

“We can help you with what you need to get into the space. Our goal is to assist you to innovate energy,” he said.

The Energy and Mines Australia summit was held from June 29-30 at the Pan Pacific Perth.

Cheap energy from wind and solar is t... Read more
Renewables for industry
Australian businesses are making one big mistake when it comes to renewable energy. image

If there was any doubt that the Austr... Read more
Renewables for industry
New age for industry, powered by renewable energy image

In an Australian first, daytime opera... Read more
Renewables for industry
View all related stories
Follow Us
Back to top