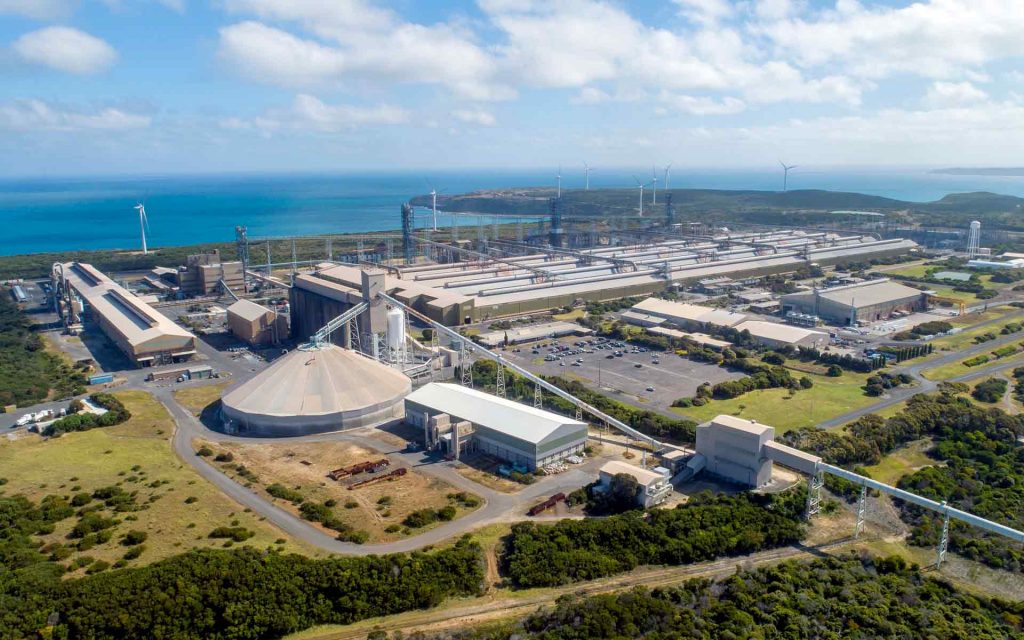 The Portland Aluminium Smelter is Victoria's largest consumer of electricity.

A subsidiary of Alinta Energy, Spinifex Offshore Wind Farm is a proposed 1GW wind farm off the coast of Portland.

The Portland Aluminium smelter is Victoria’s largest electricity user, accounting for more than 10 per cent of the state’s electricity demand.

With the help of a $1.5 million grant from ARENA, Spinifex will be installing Light Detection and Ranging (LiDAR) technology to assess offshore wind conditions at the location.

The $3.47 million project will help inform Spinifex about the project’s commercial viability.

Funding will also go towards community consultation and environmental assessment.

“Spinifex has terrific potential because the region has strong wind and the project has a ready-made grid connection point, a potential customer, a port, and suitable topography. Given the offshore wind industry is in its infancy, the support from ARENA will be critical to reaching the next stage,” he said.

The wind farm could be connected to the National Electricity Market (NEM) via the existing substation at the Portland smelter and supply renewable electricity directly to the smelter.

Aluminium smelting is one of the most energy intensive industrial processes in the world, requiring vast amounts of electricity.

Switching to renewables is vital to reducing emissions from aluminium smelters and to achieving Australia’s net zero goals.

While the electricity transition already underway in the NEM is already bringing down emissions, Spinifex is the first project to propose connecting renewable generation on this scale directly to one of Australia’s smelters.

If the wind farm proceeds, the Spinifex wind farm would be able to supply 100 per cent of the electricity requirements of the Portland smelter. Around half of the wind farm’s generation would go towards the smelter and the rest would be exported back to the grid.

Reducing emissions from metals production is a strategic priority for ARENA, with a focus on aluminium and steel value chains.

To date, ARENA’s work in the aluminium sector has mostly been through projects to decarbonise alumina refining. This emissions intensive process refines bauxite to extract alumina, which is then sent to smelters to produce aluminium. This includes funding for Alcoa to trial Mechanical Vapour Recompression (MVR) and electric calcination at alumina refineries in Western Australia.

Spinifex will be the first time ARENA has funded a project aimed at directly integrating renewable energy with a smelter.

ARENA CEO Darren Miller said the project is a strong proposal to accelerate the transition to low emissions metals production.

“Metals production, especially aluminium, represents one of Australia’s most energy intensive industries. We have a real need to help reduce emissions from smelters, which require a steady and sizeable supply of electricity to operate. Offshore wind could be a potential part of the solution space to this problem,” Mr Miller said.

“Further, the early stage wind resource assessment of the Spinifex project will provide the industry with valuable insights regarding commercial, technical and regulatory aspects of offshore wind developments in Australia.

Offshore wind is an area of increasing interest in Australia, where there are currently no offshore wind farms in operation. This is in contrast with Europe, where countries like the UK, Netherlands and Denmark are leading the way with a growing share of their electricity provide by offshore turbines.

The Australian Government has since outlined big ambitions, with Minister for Climate Change and Energy Chris Bowen announcing six offshore wind regions. The Southern Ocean off the coast of Portland is one of these regions, with two more on either side of Bass Strait.

The Southern Ocean and Bass Strait between Victoria and Tasmania have some of the world’s best offshore wind resources. With high winds and ample shallow water, the region is attracting interest from offshore wind projects in their early stages.

The Victorian Government has set an ambitious target to have 9GW of offshore wind generation built by 2030. This has been backed with nearly $38 million to advance three projects off the coast of Gippsland in the state’s east.

These are some of the most advanced offshore wind proposals in Australia, but Spinifex is leading the way in Western Victoria.

The LiDAR data from the Spinifex study will shed light on the offshore wind resources in the region. This could inform the viability of not just Spinifex, but other offshore wind proposals.

The wind monitoring portion of the project is due to commence in late 2022 and be completed by 2025.

Manufacturers are being supported to ... Read more
Renewables for industry
ARENA expands into energy efficiency with IETS image

If there was a fully renewable energy... Read more
Renewables for industry
New era for ARENA image

The Australian Government has committ... Read more
Renewables for industry
View all related stories
Follow Us
Back to top