‘It’s gunna get big’: the story of a new solar farm and the people behind its rise. 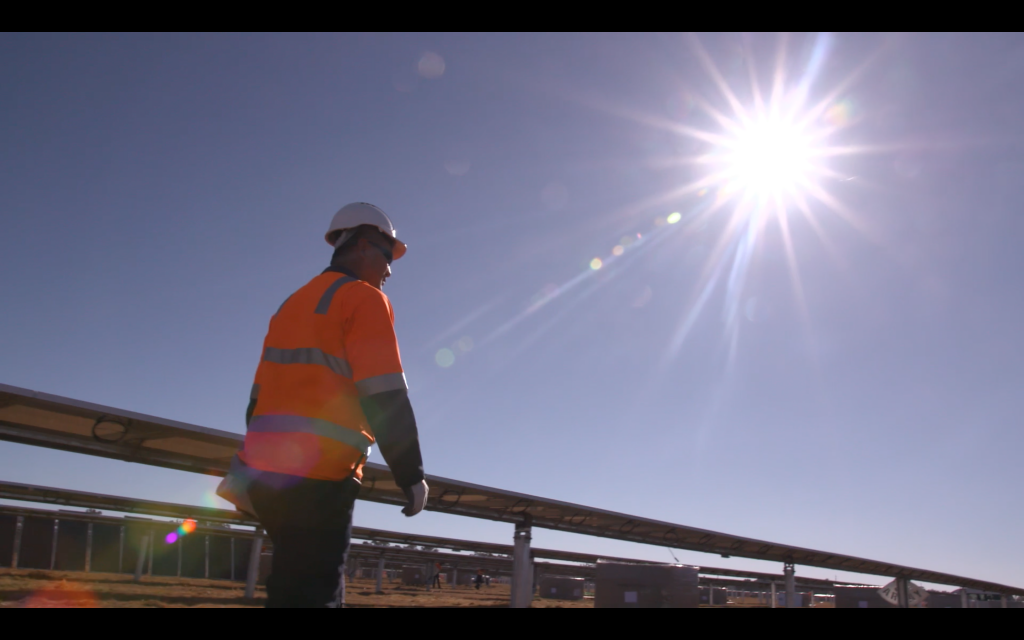 With those words Parkes local Sam Hawker hits on something that is true of both the solar farm he is helping to construct as well as the industry and technology it represents.

Something has happened in Parkes that has changed more than just the energy mix being created and consumed. It has changed the town itself.

“I’m a third generation farmer in the Parkes district,” says Ken Keith, the local Mayor and a landowner who adjoins the solar farm with his sheep property. “I’m sure my grandfather would never have thought that he would have a solar farm next to him.”

These characters and the stories of many others living and working around them are captured in A Quiet Evolution, a mini documentary produced for ARENA by filmmaker Steve Doyle.

The film chronicles the birth of the Parkes Solar Farm, a 55 MW photovoltaic facility which features approximately 206,000 solar panels on 210 hectares near the NSW regional city.

It will soon be producing enough electricity to power 21,000 homes.

Parkes is one of 12 similar projects funded by ARENA’s Large Scale Solar funding round. The plant will use solar PV panels mounted on a tracking system that shifts the angle of the panels to follow the sun.

And that allows the maximum amount of sunlight to be captured by the solar panels for conversion into electricity.

ARENA contributed almost $7 million to the $114 million cost of the project.

Filmmaker Doyle was hired by ARENA to spend some time in Parkes and tell the story of what happens in a regional community when large scale solar comes to town.

For one thing: jobs (around 120 of them). At the time of the company’s most recent report 57,378 hours of work had been poured into transforming the site into a solar farm.

Telling that story took time. Doyle prepared, researched, interviewed and shot the film over a two month period, interviewing local residents, workers on the project and representatives of the large companies behind it.

In total he captured almost eight hours of footage, distilling that into ten minute and three minute long films.

“The video captures the emergence of the Large Scale Solar industry into a maturity that will sustain it for the next 30 years & beyond,” he says.

“I loved the opportunity to tell the story of that emergence through the words & feelings of a range of people working on the site.”

A Quiet Evolution, introduces characters such as Tory Moon, a Parkes local “born and bred” who has risen to lead a team engaged in constructing the solar farm.

The film speaks to a number of people employed in the installation of the facility, which is owned and will be run by Neoen, an independent power producer that develops, finances, builds and operates renewable energy facilities.

The 12 large scale solar farms being supported by ARENA will increase the nation’s experience in planning and building renewable power plants, help to make such projects more commercial and also boost their attractiveness for private investors.

As the 12 projects near completion it is clear that they have played a massive role in transforming not just renewable energy but the communities in which they are situated.

Row upon row of gleaming panels have now been installed and the farm will soon be supplying clean, renewable energy. “It’s gunna get big,” Sam Hawker predicted.

There can’t be much doubt he was right.

The secret to a truly ‘noteworthy’ solar cell, brought to you by CSIRO image

How can Indigenous communities equip ... Read more
Solar energy
View all related stories
Follow Us
Back to top