With the power to slash power bills and emissions, everybody wins from solar. Right? Not necessarily. 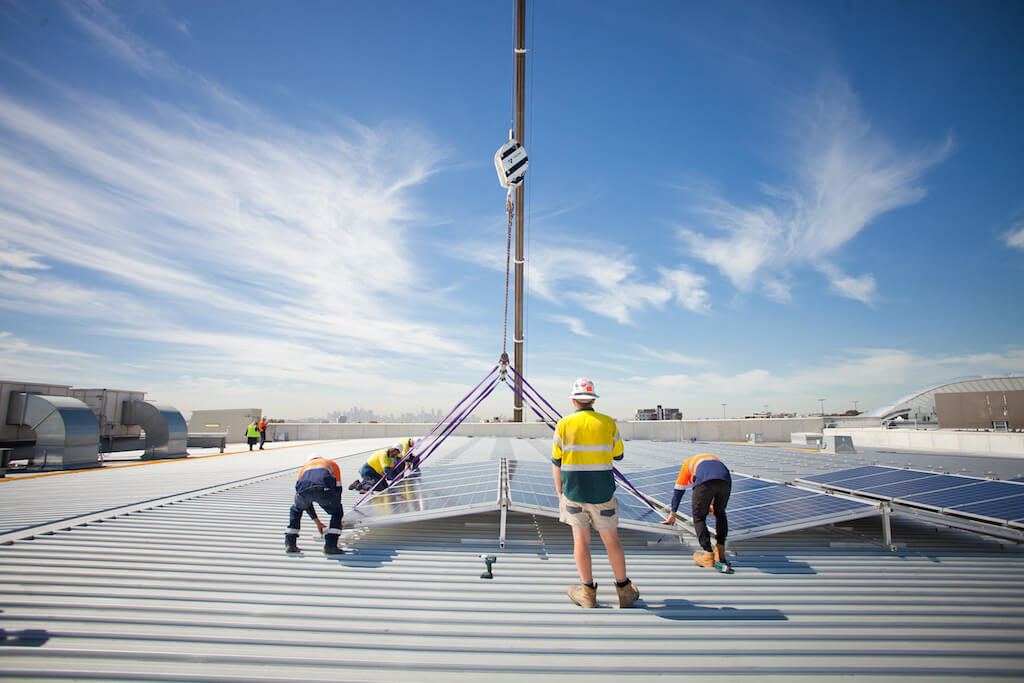 For renters – whether residential or commercial – there has been little incentive to make the upfront investment in solar panels with no guarantee that they will be around to reap the long-term payoff. And why would landlords invest in solar panels when their tenants will be the only ones to enjoy the hip pocket savings?

This isn’t a new problem, but to date few solutions have made it to the market.

A new Australian startup is looking to change that with solar ‘pods’, which can be easily moved to a new location if a tenant needs to relocate.

The prefabricated racking for solar panels are manufactured in a factory, stuck to the rooftop using an industrial strength adhesive which can be removed for use elsewhere.

ARENA has provided $975,000 in funding for Solpod to install their racking and mounting system at 25 locations across Victoria and New South Wales including shopping centres, commercial and government buildings. Each site will include up to 100 KW of solar capacity, totalling nearly 2.5 MW across the 25 locations.

The $5 million program delivered with electricity retailer ERM Power will include ten solar installations to shopping centres owned by GPT. A further ten will be installed on buildings managed by Property NSW on behalf of the NSW Government.

The roll out will help to unlock the potential of rooftop solar to commercial tenants who will be able to lease the solar arrays to align with their building lease terms, or buy the electricity via power purchase agreements. Tenants can also buy pods outright, with a view to moving their solar installation to a new site in the event of a relocation.

“Rather than individually assembling every panel, bolt, nut and cable on a customer’s roof over many weeks, Solpod assembles pods in a quality-controlled factory and minimises our time on site,” Larratt said.

Each pod weighs less than 14kg per square meter, which they say has less impact than a single person walking along the roof. The system can also help to extend the lifespan of roof sheeting by not penetrating the surface during installation. Attached using an engineered product made from foam and adhesive, Solpod say a commercial installation can be moved to a new site within one day – and it has been tested to withstand extreme weather conditions.

The solar arrays are assembled in Melbourne, which has already created 10 manufacturing jobs.

The startup’s genesis in another solar business called Energy Matters. Two of Solpod’s founders were also part of the establishment of the commercial solar provider, which was sold in 2014.

Describing the frustration of seeing naked commercial roofs in the industrial estates surrounding airports, he says there were rational reasons that these tenants weren’t installing solar, despite it making economic sense.

It started by sketching out some rough ideas, which were shelved as other projects took precedence.

“In the end it got too much. We really thought it was a good idea, so I went around and got the band back together and pulled in people that we had worked really well with before,” Larratt said.

Using their experience in the commercial solar industry, Solpod have developed the new product to give businesses the ability to reap the long-term benefits that solar can offer, while also providing the flexibility to move or redevelop their site.

“It’s very difficult for a renter to make a long-term commitment to solar, which can require a 20 or even 30 year view. But the businesses making these investment decisions can’t look that far, because they are renters or if they are owners they might want to redevelop or need to replace the roof sheeting.”

“There’s lots of reasons why it’s not appropriate for businesses to take a 20 year view, and if you don’t have that long term view it’s harder to get the business case up and show savings.”

Larratt says he targeted ERM Power because of their track record with introducing innovative products and their strong customer base.

ERM Energy’s Head of New Markets David Hershan said the system will help to revolutionise the way large-scale commercial solar energy is rolled out here in Australia, and around the world.

“Our objectives are customer specific. We help commercial and industrial customers to lower their costs of delivered energy and achieve their sustainability objectives,” Hershan said.

He describes the partnership with Solpod as an example of how the retailer supports customers to reduce demand by improving energy efficiency and installing on-site renewables.

For ERM Energy, the Solpod system stood out because it is unique, it solves an existing problem and allows solar electricity to be aligned with retail electricity.

“Now you can ask customers how many gigawatt hours they want from their roof, and how many from the grid in a three year contract, and the rooftop [solar] lowers the total rate,” he said.

ERM are also looking to incorporate modular and moveable batteries to provide a dispatchable supply of energy from solar and off-site renewables and smart controllers to manage energy loads.

The partnership will ensure that systems continue to be manufactured locally and intellectual property remains in Australia.

The first two sites trialling the system have just been turned on at the Highpoint and Parkmore shopping centres in suburban Melbourne. The company says they aim to eventually make the system available in any size and configuration, but for now they are focused on larger commercial buildings.

“Solpod’s new way of installing solar will pave the way for businesses and customers who were previously locked out of rooftop solar to take up renewable energy,” Darren Miller said.

ARENA is supporting a wide range of projects that are making renewable energy available more widely.

Last year, ARENA funded the Institute of Sustainable Futures at the University of Technology System to explore the feasibility of developing “solar gardens” in Australia, a popular concept in the United States that refers to constructing centralised off-site solar arrays that people living in apartments can buy into or rent.

What are renewable energy zones, and why do they matter? image

It is true that the sun doesn’t alw... Read more
Solar energy
Alice Springs – a testbed for the future energy market? image

In the Northern Territory, solar is s... Read more
Solar energy
View all related stories
Follow Us
Back to top